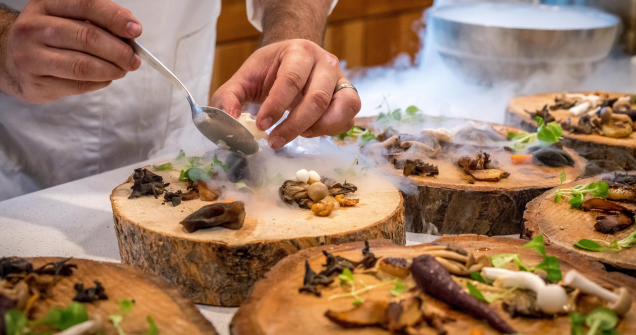 By Peter Szende and Namrata Sridhar

From the start, menus have been a customer’s first impression into the restaurant’s culinary experience. Menus that have been carefully designed have drawn the customer’s eye to specific dishes and provide guidance when selecting a meal. (e.g. McCall & Lynn, 2008)

Restaurant menu experts have begun to find that using consumer psychology to design their menus have a direct impact on guest purchases and total revenue. These experts have noted that how a menu item is named can influence the guest perception of the dish. “A highly descriptive name can help create value by priming the guest with positive affects.” (Yang, 2013, p. 8)

While descriptive menu labels have been in the center of attention of researchers, the history and practice of naming dishes received little attention.

A Brief History of Menus

In part, based on Marco Polo’s travel notes in China, we could believe that during the Southern Song Dynasty, the commercially lively 13th century Hangzhou had an important restaurant scene where customers, after being seated at taverns, were handed a menu to choose dishes according to their preferences (Gernet, 1962, Szende, Pang, & Yu, 2013).

Similarly, the first menus in Europe appeared at the end of the middle ages. A medieval text written in 1393 “Le Ménagier de Paris,” (The good wife’s guide) presents menus for various occasions and feasts. (Rambourg, 2011).

However, the Germans will often cite their findings about the ‘first written menu’ from a festive banquet in 1541. According to their account, a long note, “ein langer zedel” was placed in front of the guests with the menu created by the Chef, ‘Kuchenmayster.’ (Kindermann, 1964, p. 202.)

The Origin of Naming Dishes

In early years, dish names contained basic menu labels only e.g. “chapon aux herbes” or “poulaille farcie” used by Chef Taillevent (Poulain & Neirinck, 2004, p. 66). However, towards the end of the 17th century, it is assumed that French Chef Massialot, began the practice of naming dishes so that they could be universally recognized.

Since then, giving dishes a name (‘appellation culinaire’) has become an essential characteristic of grand cuisines (Poulain & Neirinck, 2004).

This begs the question, why French dishes needed an additional name? The answer is probably in the complexity of classic French cuisine and the importance of the garnishes. These garnishes were common and integral to French cuisine. “Garnishes consist of various trimmings added to a dish or placed around the meat, chicken, fish, etc., or served at the same time on a separate dish. Garnishes must always blend with the flavor of the basic dish.” (Montagné, pp. 445-446) Garnishes were labeled as either are Simple or Composite and could contain either an individual or numerous components.

During his reign, Louis XV used the Château de Choisy as a royal residence and a refuge to meet Madame de Pompadour. 413 colorful and richly-decorated menus, many of them hand-calligraphed, commemorating his frequent visits between 1744-1759. The Choisy menus were created in only one copy. Contrary to the current practice of the menu, no menus were distributed to the guests. Louis XV might have wanted to keep the menus as memorabilia. Choisy’s menus were all placed into eight collections keeping as personal memories. The menus were all signed by F.P. Brain de Sainte-Marie; the menu designer’s true identity regretfully remains a mystery (Josserand, 2008).

Many of the menu items indicate the origin of the food, such as “les chapons de Bruges,” or “le marcassin et le chevreuil de Compiègne.” Appellations culinaires appear on the menus as well, referring to the methods of preparation of dishes, such as “à la Strasbourg,” or “à la provençale.” (Rambourg, 2011, p. 15) Some of the menu items were brought in by distinguished guests and the menu items carried their names, such as the wild boar pudding on January 10, 1752: “Boudin de sanglier par le marquis d’Ecquevilliers” (Josserand, 2008, p. 17). 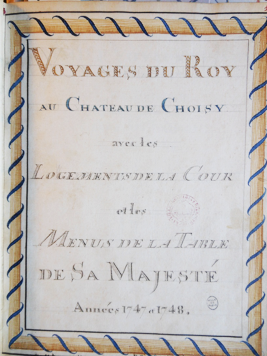 The Birth of Parisian Restaurant Menus

Beginning in the early 1770s, Spang claims that restaurants utilized printed menus for guests to select their meals. (Spang, 2000) According to an early 19th-century local dining guide, the first Parisian restaurants opened their doors in 1774 (Le guide, 1814, p. 10).

One of the oldest menus that included individually priced items is the Véry brothers restaurant in the 1790s. The menu is structured by categories and several appellations culinaires are present. Some indicate preparation methods, such as the “Tourte à la financière,” or the “Poitrine de mouton à la Sainte-Menehoult aux choux ou aux navets,” or the “Morue à la maître d’hôtel.”

Carême was the father of haute cuisine and a devoted codifier of French cuisine; he could be considered as one of the first celebrity chefs who cooked for Georges IV in England and the Tsar Alexander I of Russia.  (Jankowski, 2017).

Escoffier later attributed the foundation for French cuisine and preparation to Carême who allowed it to transcend borders and gain appreciation worldwide. (Ferguson, 2004)

From Ferguson, we learn that “Carême baptized each preparation…sometimes he had the ingredients supplied the names…the variants – of soups, of sauces, and other dishes – allowed him greater scope for honorific, geographical, and historical names.” (Ferguson, 2004, p. 72)

Carême believed that by these appellations culinaires would be more recognizable for culinary professionals. (Ferguson, 2004)

“The most famous cook in the world,” Escoffier was considered a champion of French cooking. (Shaw, 1994, p. 9) “Escoffier radically simplified food service by advocating the use of seasonal ingredients and the abandonment of elaborate garnishes. He also streamlined the organization of professional kitchens.” (Britannica, n.d.) Throughout his long career, he invented several infamous dishes that still remain prevalent today.  As Escoffier wrote, “I first put Pêche Melba on the menu for the opening of the Carlton Hotel [in London].” (Escoffier, 1997, p. 115)

Much like the Pêche Melba, Escoffier would name all his favorite dishes after women. The range of women extended from princesses to actresses and singers, as well as demi-mondaines. Other times, Escoffier elected to name his dishes after destinations such as Filets de Sole Walewska that was named after the Villa Walewska in Monte Carlo. (Shaw, 1994)

From the beginning, Escoffier remained adamant that the French names remained untranslatable. Because of the French language’s diverse descriptions, he insisted that French “cuisine would continue to speak French.” (Ferguson, 2004, p. 72) 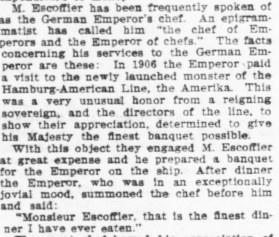 “The Best Dinner I Ever Ate!” Said the Kaiser.

Let’s refer to Prosper Montagné again: “Garnishes are numerous and important to French cuisine. They are sometimes named after the man who originated them, or for an occasion, or for a place, or for many other reasons. (Montagné, p. 445) Expanding on Montagné’s attempt to better understand appellations culinaires, see below a few selected categories of naming culinary preparations:

First published in 1914, Le Répertoire de La Cuisine was written by Théodore Gringoire and Louis Saulnier; the latter being Escoffier’s own student. This little book quickly became a standard reference for the culinary world and the Bible for chefs and restaurateurs. The book contained a short explanation of seven thousand classic garnishes. Appellations culinaires helped clarify the meaning of various culinary terms and it denoted specific garnishes and the method of cooking/preparation. As such, generations of culinary or hospitality students will know with closed eyes what the base ingredient is of various appellations: e.g.

Starting in France, many other countries adopted well known French appellations or created their own ones. Delmonico’s, the first fine dining restaurant in the US opened its doors in 1837. In 1862, Charles Ranhofer became their Chef. A French-born and trained Chef who built a remarkable reputation for haute cuisine in New York and invented many legendary dishes such as Eggs Benedict, Baked Alaska (commemorating the purchase of Alaska from the Russians in 1867) or Lobster Newburg. (Delmonico’s, N/D).

Delmonico’s menu offered in 1838 was presented both in English and French and included some appellations culinaires. Here are a few examples: (Menu items are transcribed as found on the menu) 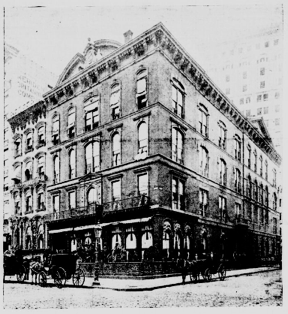 In 1862, when Charles Ranhofer joined Delmonico’s, he switched the bilingual menu to French-only. (Haley, 2011) For decades, this French gastronomic restaurant was clearly the social center for the affluent New York elite.

With time, the concern has become that the French language itself will seriously threaten the survival of appellations culinaires in the New World.

However, French restaurants and dishes remained among the leading cuisines. These restaurants continued to appeal to the high-class diners with higher prices and more formal dress codes. (Haley, 2011)

A long debate over the necessity of French menus had begun in American society. Here are three examples: 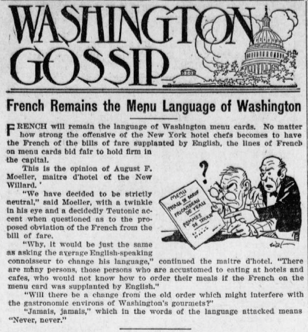 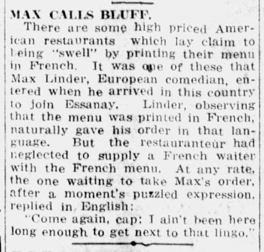 As the usage of French language menus decreased by the end of the first World War, appellations culinaires also diminished.

In 1976, Jacques Pépin emphasized the importance of establishing a structure and scope for French cooking and garnishes. However, he lamented that internationally, dishes were produced and named in restaurants without an understanding of the proper garnish to be utilized. (Saulnier, 1976).

In spite of the existing reference books and culinary guides, due to the uncontrolled nature of naming dishes, the globalization and the proliferation and permutation of designations that were used led to a rather chaotic situation in the world of gastronomy.

The fading of appellations culinaires in the culinary world.

Systematically naming culinary preparations in fine dining restaurants had been a norm until Nouvelle Cuisine revolutionized French cooking toward the end of 1960th and in the 1970th. Jacques Pépin wrote in 2003: “Nouvelle Cuisine was, and would remain, the biggest revolution in my culinary life.” (Pépin, 2003, p. 178.)

Interestingly, when the first author of this article moved to France in the early 1990th observed many fine dining chefs were still keeping the Gringoire and Saulnier book in their back pockets of their chef pants.

On November 29, 2016, we had the opportunity to interview Chef Jacques Pépin and Chef Jean-Claude Szurdak at the School of Hospitality Administration at Boston University. At this point, we asked Chef Pépin on his thoughts regarding the importance and relevancy of appellations culinaires in modern-day kitchens. Chef Pépin noted that during his early years in the kitchens, these terms were crucial for the success of the restaurants as they were a universal language. With the rise of Nouvelle Cuisine, Chef Pépin confirmed that there was a decrease in these denominations. This created more complicated menu descriptions and decreased comprehension by patrons. 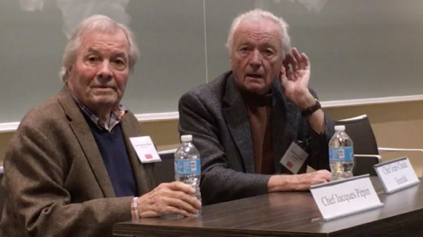 Ferguson, P.P. (2004). Accounting for Taste: The Triumph of French Cuisine. Chicago: The University of Chicago Press.

Trubek, A. B. (2000). Haute Cuisine: How the French Invented the Culinary Profession. Philadelphia: University of Pennsylvania Press.

Dr. Peter Szende has over 25 years of management experience in the hospitality industry in both Europe and North America. He is currently a Programme Lead in Hospitality Management at Oxford Brookes Business School, UK.

Namrata Sridhar is a graduate of Boston University’s School of Hospitality Administration (BU SHA) class of 2019. She currently works for Tock HQ as a marketing coordinator in Chicago, IL. She has also previously worked in a marketing communications capacities at RealFood Consulting as well as EF Education First in both a marketing and operations role. During her time at BU, Namrata also served as the President of the Student Government of BU SHA and was an active member of the National Society of Minorities in Hospitality, the American Hotel and Lodging Association, and the Hospitality Sales and Marketing Association International.