April 14, 2015 was the 150th anniversary of the assassination of President Abraham Lincoln. This is the story of how that fateful day was linked to Boston, the Booth Brothers, and the Parker House.

Hotel personnel have always collected wondrous tales about the visiting celebrities they’ve observed over decades of service. Few stories, however, titillated Bostonians as much as those told by longtime Parker House bellboy Bernard J. (“Barney”) Brogan in 1925.

“I recall as vividly as if it were yesterday,” Brogan reminisced with a Boston Globe reporter, “seeing [him] at breakfast with two other men in the ladies’ cafe on the School street and Chapman place corner [of the old Parker House] on the morning of Thursday, April 6, 1865… The morning sunlight [was] streaming in through an east window onto his rather marble-like face and luxuriant black glossy hair. He was a handsome, kindly and good natured man. It was his second day in Boston at the time and he left the city that same day.” 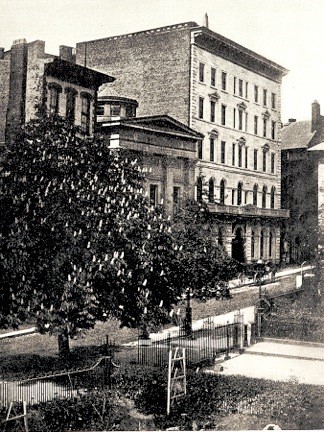 The man who came to breakfast was not only a popular actor from a famous theatrical family. He was also a charming matinée idol, an unabashed ladies’ man, an ardent Confederate sympathizer—and the man destined to assassinate President Lincoln in Washington, D.C., only eight days later. 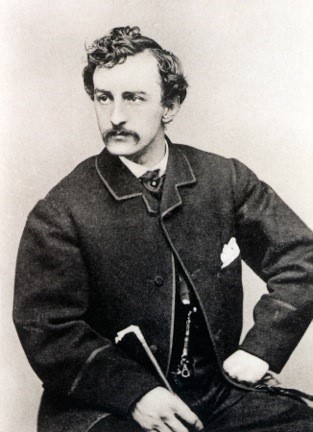 “No one could have suspected then that he was capable of such a crime and was so near achieving infamous immortality,” pondered bellhop Brogan sixty years after the fact.

Back in 1865, the illustrious Booth family meant far more to the Hub than to many other American cities. London-born Junius Brutus Booth had played on Boston stages many times in his career, beginning at the old Federal Street Theatre, Boston’s first real playhouse. Three of his American-born children—Edwin, Junius Jr., and John Wilkes —took up professional acting as well, though only Edwin (1833-93) became a world-class tragedian. It was Edwin, too, who held a special affection for Boston, finding both his theatrical footing and occasional homes in the welcoming Hub.

Edwin’s theatrical debut was at the Boston Museum on Tremont Street, on September 10, 1849. Though only fifteen years old and playing a minor part under his father’s starring role as Richard III, young Edwin was hooked. Eight years later, on April 20, 1857, Edwin headlined at the Boston Theater on Washington Street as Sir Giles Overreach. That victorious performance proved the turning point of his career—preparing him for the prestigious New York City stage, and officially beginning his thirty-year reign as the American actor of note.

In 1858, Edwin met actress Mary Devlin, who frequently played Juliet to his Romeo (curiously, Devlin also played Juliet to the Romeo of Charlotte Cushman, a talented Bostonian who lived full-time at the Parker House, was America’s first great actress and who gladly donned trousers to play male roles). By 1860, Booth and Devlin had married. And in1862, they made a home for themselves and infant daughter, Edwina, on Washington Street in Dorchester. 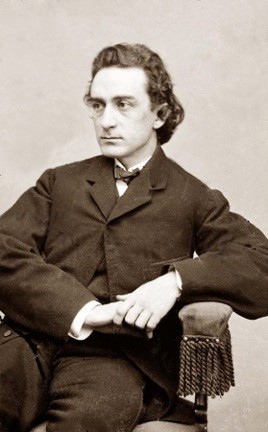 Though younger brother John Wilkes primarily played stages in the South while Edwin conquered the Northeast and Junius Jr. the Midwest, all three Booths periodically toured the states for work, pleasure, or familial obligation. John, for example, happily joined Edwin and Mary for their wedding in 1860. Three years later, on February 24, 1863, John joined Edwin for a sad occasion—Mary’s burial at Mount Auburn Cemetery in Cambridge.

Following Mary’s untimely death, the distraught Edwin left Dorchester with his daughter, retired briefly from performing, and moved his primary residence to New York. But the boards continued to call the Booths to work. In 1864, the same year all three Booth brothers collaborated in a New York production of Julius Caesar, John Wilkes played the romantic hero of The Marble Heart at the Boston Museum. While Edwin came to specialize in difficult dramatic roles like Hamlet and Richelieu, John tended towards fluffier stuff, enamoring female fans with his dashing swordplay, daring leaps, flashing eyes, and impassioned gestures.

During the early1860s, the Booths’ stage careers grew as the Civil War ravaged the country. Edwin believed in the Union cause, and proudly cast his first vote ever for Abraham Lincoln in the mid-war elections of 1863. Southern-based John Wilkes, who defended both States Rights and slavery, fervently disagreed. “When I told him I had voted for Lincoln’s re-election he expressed deep regret, and declared his belief that Lincoln would be made king of America,” wrote Edwin in an 1881 letter. “[T]his, I believe, drove him beyond the limits of reason. I asked [John] once why he did not join the Confederate Army. To which he replied: ‘I promised mother I would keep out of the quarrel, if possible, and I am sorry that I said so….’

“All his theatrical friends speak of [John] as a poor, crazy boy,” finished Edwin, “and such his family think of him.”

Why John Wilkes Booth finally snapped—plotting first to abduct Lincoln, and finally to assassinate him—is the subject of numerous theories, books, and interpretations. We do know that on July 26, 1864 he had joined representatives of the Confederate Secret Service at the Parker House for a meeting meant to undermine the Lincoln administration. At the time, Booth was considered a promising recruit for a conspiracy geared to kidnapping the President. Still, two facts are clear: the rest of the Booth family had no notion of John’s evolving plots, either in 1864 or a year later, and were to suffer the consequences of his deed for decades thereafter. 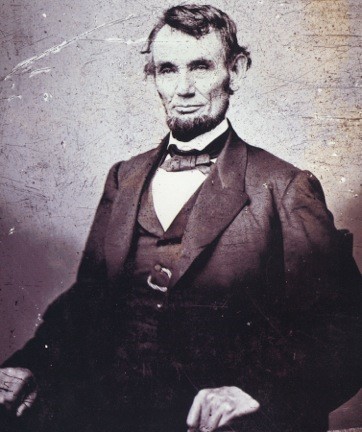 By the time John Wilkes Booth was again seen at the Parker House in April of 1865, eight days before the assassination, the War Between the States was essentially ended. When he arrived, Boston was fairly bursting with banners, parades, fireworks displays, and other public celebrations over the fall of the South and the ending of slavery. Probably equally irksome to John was that black abolitionist Frederick Douglass was a featured speaker at Faneuil Hall.

What John did in Boston on April 5 and 6, 1865, is not altogether clear. Perhaps he went to see brother Edwin, who was playing a successful three-week engagement at the 3,000-seat Boston Theater. Perhaps, as reported in the Boston Evening Transcript of April 15, he was practicing his aim: “[A man named] Borland…stated that he saw Booth after he came to Boston, and was in company with him at Edwards’ shooting gallery [presumably Roland Edwards’ Pistol Gallery at 4 Green Street], where Booth practiced pistol firing in various difficult ways such as between his legs, over his shoulder and under his arms.”

After the night of April 14, when Booth shot Lincoln at Ford’s Theatre in Washington, Boston could only speculate, and mourn. As a gesture of good will, good public relations, and personal safety—since death threats would certainly be levied against Booth and his family for months to come—manager Henry C. Jarrett closed the Boston Theater, and messaged Edwin of his action. Edwin heartily agreed, returning a note that spoke of his own “deepest sorrow and great agitation.” After suffering a precautionary police search through his belongings, the actor lay low, then left Boston on a midnight train to join his mother. Since Boston so loved and trusted Edwin Booth, local papers immediately printed Jarrett’s and Booth’s letters, and continued to run editorials in his defense over the ensuing weeks.

Boston’s love of Edwin Booth was returned in kind. Following nine months of seclusion in New York, he resumed his acting career, periodically returning to Boston stages. He kept many influential friends in the Hub, and maintained a home on 29 Chestnut Street on Beacon Hill in his later years. His grown daughter, Edwina, bought a flat on Beacon Street overlooking the Charles River. And though the Booth family plot remained in Baltimore, Edwin Booth chose, in the end, to return to the woman and place he loved. On June 9,1893, amidst a stunning sunset, he was buried on Anemone Path at Mount Auburn Cemetery, beside his favorite wife and co-star, Mary Devlin.