The Boston University Center for Computational Science (CCS) was founded in 1990 to coordinate and promote computationally-based research, to foster computational science education and to provide for the expansion of computational resources and support.
CCS provides a forum for the multidisciplinary exchange of ideas among researchers, educators, and students. Regularly scheduled seminars as well as workshops and symposia are offered to highlight advances in computational science. CCS has acted to develop and facilitate the formulation of projects in computationally-based research and education, working with scientists from 20 different departments and centers. Recently CCS has pioneered the use of GPUs for scientific applications, securing funding for the installation of a cluster with 64 Fermi GPUs from NVIDIA.

CCS works in close collaboration with Information Services & Technology, in particular with its Scientific Computing and Visualization (SCV) group, in the development of resources to support computational science. The IBM BlueGene/L, which was installed at BU through a joint CCS and SCV effort, still continues to provide very valuable computer cycles to scientists at BU and elsewhere in the nation. The figures below show results from the Lattice Strong Dynamics (LSD) collaboration.

CCS offers a Certificate in Computational Science to graduate students in engineering and science pursuing a Ph.D. through a multidisciplinary training program ACES (Advanced Computation in Engineering and Science). 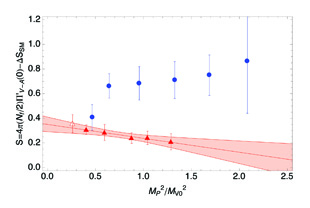 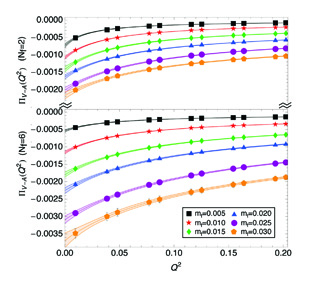 Data obtained by the national Lattice Strong Dynamics collaboration from particle physics simulations which can determine the viability of various models for the phenomena currently investigated with the Large Hadron Collider at CERN. The LSD collaboration (http://www.yale.edu/LSD/) comprises scientists at BU and several other national universities and laboratories. Over a million processor hours on the BG/L at BU together with many more millions of processor hours at LLNL and other labs have been used by the members of the LSD collaboration to explore “beyond the standard model” physics