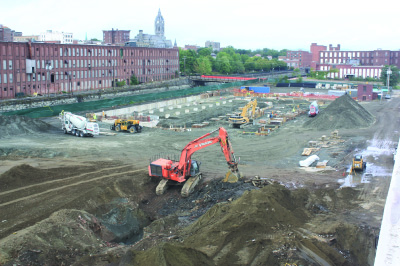 Massachusetts Green High Performance Computing Center (MGHPCC) is designed to support the growing scientific and engineering computing needs at five of the most research-intensive universities in Massachusetts – Boston University, Harvard University, MIT, Northeastern and The University of Massachusetts. Additional resources in the center are available to support other interested research and educational institutions. The facility is scheduled to begin operation at the end of 2012.

The computing infrastructure in the MGHPCC facility includes 33,000 square feet of computer room space optimized for high performance computing systems, a 15MW power feed, and a high efficiency cooling plant that can support up to 10MW of computing load. The communication infrastructure includes dark fiber connections to all of the campuses on a loop that passes through Boston and New York City.

The MGHPCC owns an 8.6 acre site, leaving room for the addition of new floor space. The power substation on the site includes provisions for expansion to 30MW. The site is located in Holyoke, Massachusetts where a nearby hydroelectric facility on the Connecticut River supplies inexpensive, renewable energy.