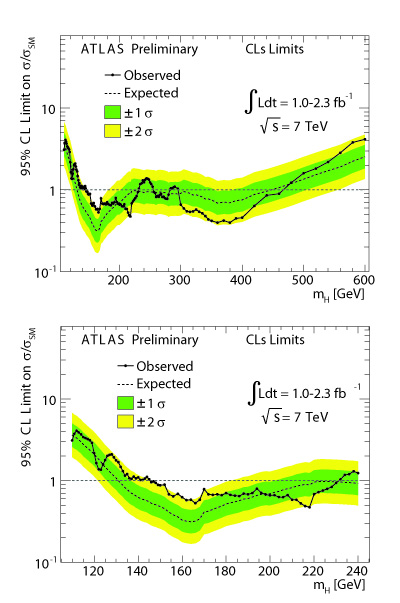 This figure shows the expected and observed sensitivity of the search for the Higgs that arises from combining the results of searches in all decay modes studied to date. The black undulating dashed line shows ATLAS’ predicted sensitivity to the Higgs boson in the mass range 100-600 GeV, based on simulations. The green and yellow bands correspond to the uncertainty in these predictions. The solid black line shows ATLAS’ limit on Higgs production based on actual data collected. The plot shows that, with one inverse femtobarn of data collected, ATLAS can exclude with 95 percent confidence the existence of a Higgs wherever the solid line dips below the horizontal dashed line at 1. Many mass regions are excluded. In some other regions, there are small excesses above expectations.

ATLAS is a particle physics experiment at the Large Hadron Collider (LHC) at the CERN laboratory in Geneva Switzerland.  The experiment is conducted by a collaboration of more than 3,000 physicists from 174 universities and laboratories from around the world.  Boston University and Harvard University are both part of this collaboration and we jointly provide one of the five U.S. ATLAS “Tier 2” computing centers: the Northeast Tier 2 Center (NET2).  As a Tier 2, we must be able to process multiple petabytes of data produced by the experiment and must provide computing resources for both simulating proton-proton collisions and for analyzing the simulated and real data.

Physics as it is known today is ultimately described by gravity as proposed by Einstein and by a separate and much more complicated theory called the “Standard Model” which explains the non-gravitational interactions of electrons, muons, taus, neutrinos, quarks, photons, W/Z bosons, and gluons. In addition to these elementary particles, the standard model predicts one more particle which is different than all the others and which makes the whole theory work in an essential way, and which is hypothesized to be so massive as to be unobservable in pre-LHC accelerator experiments. Searching for this “Higgs boson” is one of the main goals of the ATLAS experiment. Here you can see a simulation of a Higgs boson produced by proton-proton collisions in the LHC and a summary of the experimental search for the Higgs based on ATLAS data from the past year. As you can see, about half of the possible range of Higgs masses have already been eliminated with 95% confidence. Given the excellent performance of the LHC and the ATLAS experiment, we have a good chance of actually observing the Higgs boson within the next year. 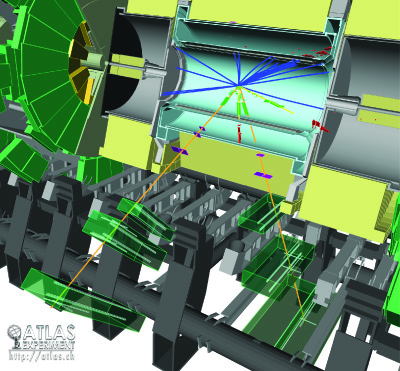 Display of a high-pT H → ZZ* → eeμμ decay (mH = 130 GeV), after full simulation and reconstruction in the ATLAS detector. The four leptons and the recoiling jet with ET = 135 GeV are clearly visible. Hits in the Inner Detector are shown in green for the four reconstructed leptons, both for the precision tracker (pixel and silicon micro-strip detectors) at the inner radii and for the transition radiation tracker at the outer radii. The other tracks reconstructed with pT > 0.5 GeV in the Inner Detector are shown in blue. The two electrons are depicted as reconstructed tracks in yellow and their energy deposits in each layer of the electromagnetic LAr calorimeter are shown in red. The two muons are shown as combined reconstructed tracks in orange, with the hit strips in the resistive-plate chambers and the hit drift tubes in the monitored drift-tube chambers visible as white lines in the barrel muon stations. The energy deposits from the muons in the barrel tile calorimeter can also be seen in purple.