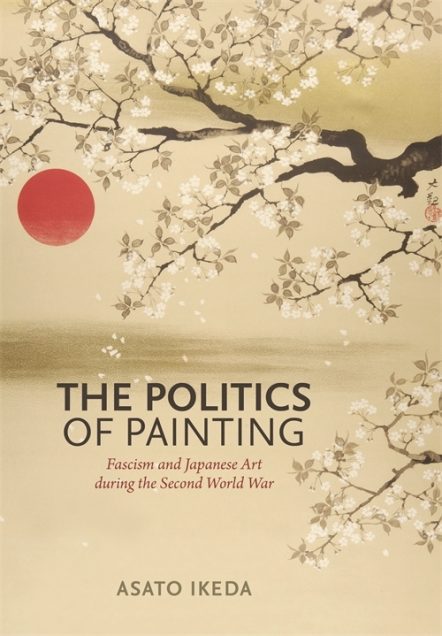 Asato Ikeda’s book The Politics of Painting: Fascism and Japanese Art During the Second World War offers an important consideration of wartime art. Ikeda, a notable scholar in the field of Japanese art history, often examines the ways that Japanese visual culture intersects with imperialism, war, gender, and sexuality. In her newest publication, she situates 1930s and 40s paintings within the context of Japanese fascism. As Ikeda contends in the book’s introduction, art produced during the Second World War has been largely neglected in Japan. It has only been since the 1990s that scholars have begun critically investigating wartime Japanese art, and almost all of this scholarly attention has been directed toward sensōga, paintings commissioned by the government to record battles. Ikeda instead focuses on paintings that reference Japanese traditions, icons, and culture to reveal the subtle ways that fascist ideology spread throughout Japan in the 1930s and 40s.

Ikeda’s book is comprised of case studies centered on Yokoyama Taikan’s paintings of Mt. Fuji, Yasuda Yukihiko’s Camp at Kisegawa (1940-1941), Uemura Shōen’s paintings of women, and Fujita Tsuguharu’s Events in Akita (1937). Each chapter seeks to uncover the ways that these artworks draw from Japan’s historical and cultural past in order to legitimize the state’s wartime efforts. For example, in “Yokoyama Taikan’s Paintings of Mt. Fuji,” Ikeda argues that Yokoyama’s landscapes resonated with and reinforced Japanese fascism by proclaiming the country’s exceptional cultural identity. Like other fascist governments, Japan’s was characterized by the belief that the country had lost its traditions and “authentic spirit” in the process of modernization. Japanese fascism sought to recreate a national community of people united by the country’s cultural inheritance. Yokoyama drew on the iconicity of Mt. Fuji, a recurring motif in art and literature for hundreds of years, to evoke Japan’s heritage and drum up patriotic support for the government’s efforts to restore Japan to glory.

Ikeda’s exploration of the intersections between fascism and gender in “Uemura Shōen’s Bijin-ga” is particularly compelling. Unlike other scholars who tend to read Uemura’s paintings as anti-war and the artist herself as proto-feminist, Ikeda argues that Uemura’s paintings bolstered the war effort by treating Japanese women as a repository of traditional values, such as self-sacrifice and restraint. For example, the subject of her 1944 painting Lady Kusunoki is a legendary fourteenth-century woman revered for urging her husband and son to fight to the death for the emperor. Ikeda argues that in the context of the Second World War, during which Japanese literature and popular media extolled the honor of women who were willing to sacrifice their sons for the war effort, Uemura’s painting was a highly politicized form of moral education for women.

While each of the case studies is insightful, well researched, and persuasive, the question of artistic agency and intention is not always satisfactorily resolved. In some cases, it is not clear if Ikeda is arguing that the artists were consciously complicit in the spread of fascism. For instance, while Yokoyama’s efforts to raise money for the military and his pro-war writings strongly indicate his support for Japan’s imperialist ideology, Uemura’s personal motivations are more difficult to establish. It would not have weakened Ikeda’s argument to acknowledge the possibility that the artists’ intentions were opposed to those of the state; in either case, their works could act as agents of fascism.

Overall, The Politics of Painting is an important contribution to the literature about wartime art. Ikeda’s skillful analyses of seemingly innocuous artworks reveal the subtle ways that visual culture mediated fascism in Japan before and during the Second World War. Her argument offers a framework for thinking about the ways that ostensibly apolitical artworks participate, either directly or indirectly, in political discourses.