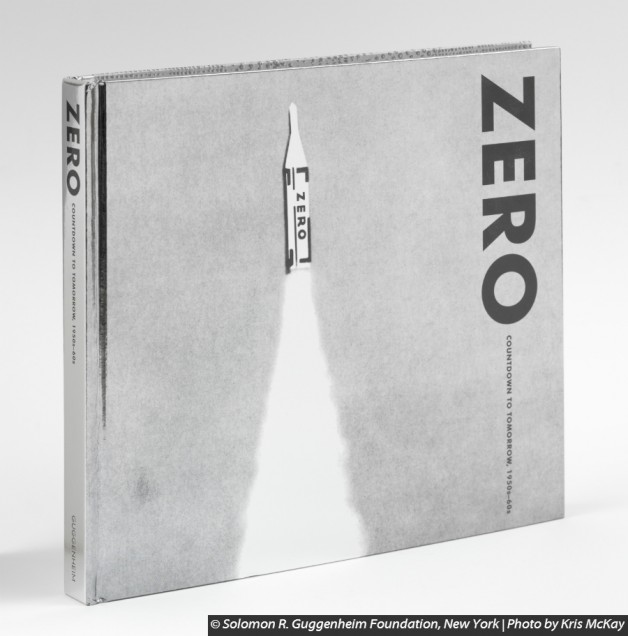 In the fall of 2014, the Guggenheim Museum in New York presented the exhibition ZERO: Countdown to Tomorrow, 1950s – 60s, the German Group Zero’s first large scale historical survey in the United States. One of many artist groups to emerge during the immediate postwar period, Group Zero sought to break with past traditions and create a new beginning for art through an investigation of alternative methods and materials. Its core members included Otto Piene, Heinz Mack, and Günther Uecker, along with thirty-seven other artists that the exhibition curator, Valerie Hillings, calls the “ZERO network.” Differentiated from the German Group Zero through its capitalization, the ZERO grouping comprised artists scattered throughout the globe: in ten countries and over four continents. These artists not only shared similar tendencies in their artwork, but also made direct contact with the Group Zero in Germany. While in the past few years there have been a number of exhibitions aimed at historicizing Group Zero – at the Boston Cyberarts Gallery (2015), the Neuberger Museum of Art (2014), and Sperone Westwater in New York (2008), to name a few – this exhibition repositions the Group Zero artists. By highlighting key artworks and Group Zero’s exhibitions and publications, Hillings demonstrates how the Group Zero practitioners were involved in a global network, placing them among artists engaged in similar art-making practices that collectively expressed a forward-looking vision.

Featuring five scholarly essays, translations of artists’ writings, as well as an extensive bibliography, the accompanying exhibition catalogue constitutes the only publication that contributes to the historicizing of Group Zero on a multinational scale. It adds significantly to the growing scholarship on artist groups working internationally from the late 1950s to mid-1960s. Moreover, this publication presents archival research on Group Zero, executed by Valerie Hillings, and provides exciting new research on the interdisciplinarity of the group’s undertakings.

In the first and most substantial essay entitled “Countdown to a New Beginning: The Multinational ZERO Network, 1950s-60s,” Hillings emphasizes connectivity – rather than cohesion – of the transnational exchange between artists. Through her description of live events and performances, as well as the publications produced by network artists including Zero, Azimuth, Nul, she highlights the channels of communication created by the ZERO network. She also argues that the ZERO network was cross generational and discusses influential figures such as Yves Klein and Lucio Fontana alongside artists of the Zero generation, which included Piero Manzoni, Hank Peeters, Almir Mavignier and Jesús Rafael Soto, among others. Overall, Hillings’ essay offers a fresh perspective on our understanding of the far-reaching trends of this historical moment.

Essays by art historians Margriet Schavemaker and Johan Pas evaluate Group Zero’s performances and publications, respectively. Schavemaker argues that Group Zero’s tactical use of mass media in the documentation of performances needs to be considered in relation to the canon of performance art. Pas addresses how the network’s embrace of connectivity and internationalism was featured in its various publications, which were generated, above all, to showcase their work and disseminate their ideas. Together, these brief essays provide convincing examples of Group Zero’s investigation of alternative mediums such as performance and artist’s magazines, and neatly support Hillings’ assessment of the multimedia quality of the artwork produced by the larger ZERO network.

The final two essays offer close investigations of specific artworks by Group Zero artists and contribute to our understanding of the ways in which these artworks functioned within larger art historical narratives. Dirk Pörschmann examines Heinz Mack’s Sahara Project (1958-1963), wherein the artist installed  reflective sculptures – or “stations” as he called them – at various intervals and in various locations. According to Mack, these pieces express the utopian optimism of the Group Zero artists. In the concluding essay, Daniel Birnbaum, Director of the Modern Museet, Stockholm, reflects on Group Zero’s Lichtraum (1964), an installation/environment constructed for Documenta in 1964, which represents Zero’s innovative approach to creating experiential encounters for viewers. Birnbaum argues that the Zero artists’ exploration of light and movement should be read in relation to the work of contemporary artists influenced by Zero, like Olafur Eliasson.

Overall, the critical essays in ZERO: Countdown to Tomorrow, 1950s – 60s address the group’s international reach and its integration of diverse media and forms. Further, they point to areas of scholarship that still need to be covered. The ultimate success of this catalogue is not only in its unique identification of the connectivity among the many artists and groups working in the ZERO network in the 1950s and 60s, but in the way that it suggests new avenues of scholarly inquiry for art historians.