Specific projects within the Global Governance for Sustainable Development program include: 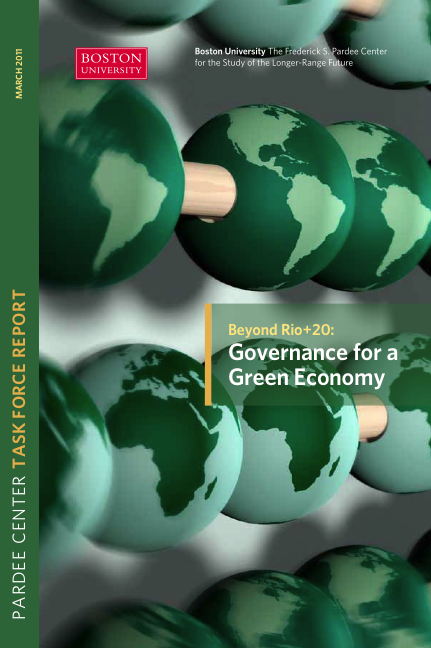 The Frederick S. Pardee Center for the Study of the Longer-Range Future convened a Task Force on “Governance for a Green Economy” in preparation for the forthcoming 2012 United Nations Conference on Sustainable Development (Rio+20). The project convened a meeting of invited experts who were asked to reflect upon and discuss the following question: If the world were to construct a truly “Green Economy” over the next 20–40 years, what sort of global governance institutions and mechanisms would be needed to manage it? A select group of experts was asked to turn their ideas into short “think pieces,” which were published as a Pardee Center Task Force Report. The  report was presented to the Rio+20 preparatory process as an input into its deliberations and was widely distributed at the UN and other intergovernmental fora.

The Frederick S. Pardee Center for the Study of the Longer-Range Future, in cooperation with the Goethe-Institut Boston and the Institute for Advanced Study in the Humanities Essen (KWI), organized a symposium on Transatlantic Perceptions of Climate Change: The Role of Arts and Media on October 18–19, 2010. The symposium examined the shaping of perceptions of climate change within Europe and the United States, and asked: What is the role of the media and the arts in determining this perception and enabling an appropriate response to climate change?

Inspired by the symposium, Pardee Fellow Dr. Miquel Muñoz and visiting fellow Dr. Bernd Sommer wrote an Issues in Brief paper titled Perceptions of Climate Change: The Role of Art and the Media.

The Frederick S. Pardee Center for the Study of the Longer-Range Future at Boston University has been actively promoting ideas for the Rio+20 conference since before it was formally announced. This includes hosting events at the United Nations, seminars and workshops at the Pardee House, preparing publications and working papers, and policy advice.

Accountability and Implementation for Sustainable Development 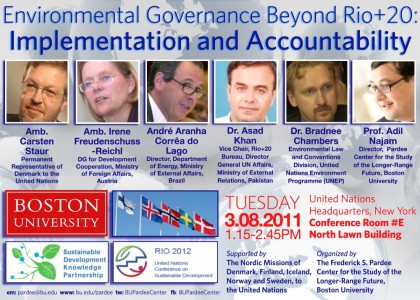 As part of Rio+20, the Frederick S. Pardee Center for the Study of the Longer-Range Future at Boston University, with support from the missions to the United Nations of the Nordic countries Denmark, Finland, Iceland, Norway, and Sweden, co-hosted a special, high-level brainstorming session on “Accountability and Implementation: The Keys to Sustainable Development” at the United Nations in New York on March 8, 2011, as a side-event at the second PrepCom meeting for the forthcoming 2012 Rio+20 conference (see another report of the event here). This event drew on previous work by the Pardee Center, including a publication, a workshop, and a seminar.

The Frederick S. Pardee Center for the Study of the Longer-Range Future at Boston University is an accredited observer of the United Nations Framework Convention on Climate Change (UNFCCC) process, as well as of the International Renewable Energy Agency (IRENA). Pardee Center members Prof. Adil Najam and Dr. Miquel Muñoz also serve in the Intergovernmental Panel on Climate Change (IPCC) as Coordinating Lead Author for AR5 and Expert Reviewer for SRREN, respectively. As an observer organization, the Pardee Center contributes to such processes through the contribution of ideas, the analysis of results, and the participation of delegates. The Pardee Center has sent delegations to landmark summits such as the 2009 UN Climate Change Conference in Copenhagen and the 2010 UN Climate Change Conference in Cancún.

New Paper: “Engaging Communities Through the Arts: A Proposed Framework and Model in Public Health Initiatives”

New Paper: “Engaging Communities Through the Arts: A Proposed Framework and Model in Public Health Initiatives”