The IMF’s New View on Financial Globalization: A Critical Assessment 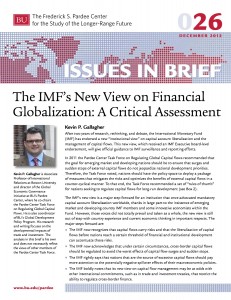 In December 2012, the International Monetary Fund (IMF) issued a new “institutional view” on capital account liberalization and the management of capital flows between countries.  In this Issues in Brief, Kevin P. Gallagher, one of the co-chairs of the Pardee Center Task Force on Regulating Global Capital Flows for Long-Run Development, offers his assessment of the IMF’s new position.

The IMF’s “institutional view” historically tempers the IMF’s advocacy of capital account liberalization and even endorses the regulation of cross-border finance in some circumstances.   What is more, the IMF points out that many trade and investment treaties do not provide the appropriate level of policy space to regulate cross-border finance when needed.

This is truly landmark, given that the IMF attempted to legally mandate worldwide capital account liberalization in the 1990s.  The turnaround is largely a function of the persistence of emerging market and developing country members of the Fund, in addition to some innovative economists on the IMF staff.  Unfortunately however, those voices did not fully prevail.

The IMF view still urges capital account liberalization as a long-run goal for all nations, only sanctions regulating cross-border finance under limited circumstances, and puts too much of the burden for regulation on emerging market countries, rather than the industrialized world that is often the source of this finance.  The brief reiterates the “rules of thumb” put forward by the Pardee Center Task Force in 2011 that should be considered when devising capital account regulations applicable to developing countries.

Kevin P. Gallagher is Associate Professor of International Relations at Boston University and director of the Global Economic Governance Initiative at BU’s Pardee Center, where he co-chairs the Pardee Center Task Force on Regulating Global Capital Flows. He is also coordinator of BU’s Global Development Policy Program and a Pardee Center Faculty Fellows. His research and writing focuses on the developmental impacts of trade and investment.