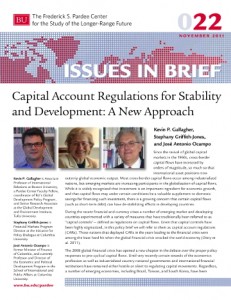 In the wake of the financial crisis numerous emerging market and developing countries have been deploying what have traditionally been referred to as ‘capital controls’ to curb excessive speculation on their currencies and domestic assets.  In response to those efforts, French President Nicolas Sarkozy called on the International Monetary Fund to develop a set of guidelines for the use of capital controls.  The goal is for the President to present such guidelines at the G-20 Summit in Cannes this year.  The IMF has published a preliminary set of guidelines to that end.  This policy brief provides a critical review of those guidelines and offers an alternative protocol for a development friendly-approach to capital account regulation.

In this policy brief, the co-conveners of the Pardee Center Task Force on Managing Capital Flows for Long-Run Development argue that capital account regulations (CARs) should be viewed as an essential tool in the macroeconomic policy toolkit. Based on discussions that occurred at the Task Force meeting in September 2011, the authors present an alternative set of guidelines for how and when CARs should be employed, and call for international financial institutions and international trade agreements to ensure that policy space remains available to allow developing countries to employ CARs when deemed necessary for financial stability and economic development.

A detailed report of the discussions and recommendations stemming from the Task Force meeting will be published by the Pardee Center in 2012.  The Task Force was convened by Boston University’s Pardee Center in collaboration with the Initiative for Policy Dialogue at Columbia University, and the Global Development and Environment Institute at Tufts University.

Stephany Griffith-Jones is Financial Markets Program Director at the Initiative for Policy Dialogue at Columbia University.

José Antonio Ocampo is former Minister of Finance of Colombia, and currently Professor and Director of the Economic and Political Development Program in the School of International and Public Affairs at Columbia University.