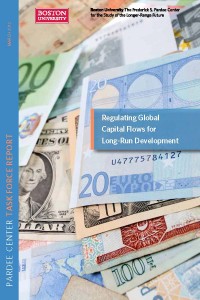 This report is the product of the Pardee Center Task Force on Regulating Global Capital Flows for Long-Run Development convened in September 2011 on behalf of the Pardee Center’s Global Economic Governance Initiative led by Kevin P. Gallagher, Associate Professor of International Relations at Boston University.  Gallagher co-chaired the Task Force along with Stephany Griffith-Jones and José Antonio Ocampo of the Initiative for Policy Dialogue (IPD) at Columbia University.

With contributions from a dozen prominent scholars and practitioners in the field of global finance and development, the report is intended to contribute expert knowledge to an important and very timely debate concerning whether and how nations can use what have been traditionally referred to as capital controls (classified in the report as ‘capital account regulations’ or CARs) to prevent and mitigate financial crises caused by short-term speculative capital flows in developing countries.

Based on discussions among members at the September 2011 meeting, the report posits that there is a clear rationale for capital account regulations in the wake of the 2008 financial crisis, that the design and monitoring of such regulations is essential for their effectiveness, and that a limited amount of global and regional cooperation would be useful to ensure that CARs can form an effective part of the macroeconomic policy toolkit. The protocol for deploying capital account regulations in developing countries that is put forth here stands in stark contrast to a set of guidelines for the use of capital controls endorsed by the board of the International Monetary Fund (IMF) in March 2011. However the Task Force’s recommendations are more in sync with the set of “coherent conclusions” on capital account regulations endorsed by the G-20 in November 2011. Our hope is that this Pardee Center Task Force Report will help inform the discussions and decisions of policymakers and the IMF as they move forward on this issue under the rubric of the G-20 recommendations.

The Task Force was co-sponsored by the BU Pardee Center, the Initiative for Policy Dialogue at Columbia University, and the Global Development and Environment Institute at Tufts University, and it met at Boston University in September 2011.

The Task Force Co-Chairs authored an Issues In Brief on this subject in November 2011 published by the Pardee Center.

A video of task Force Members presenting the report is available here.