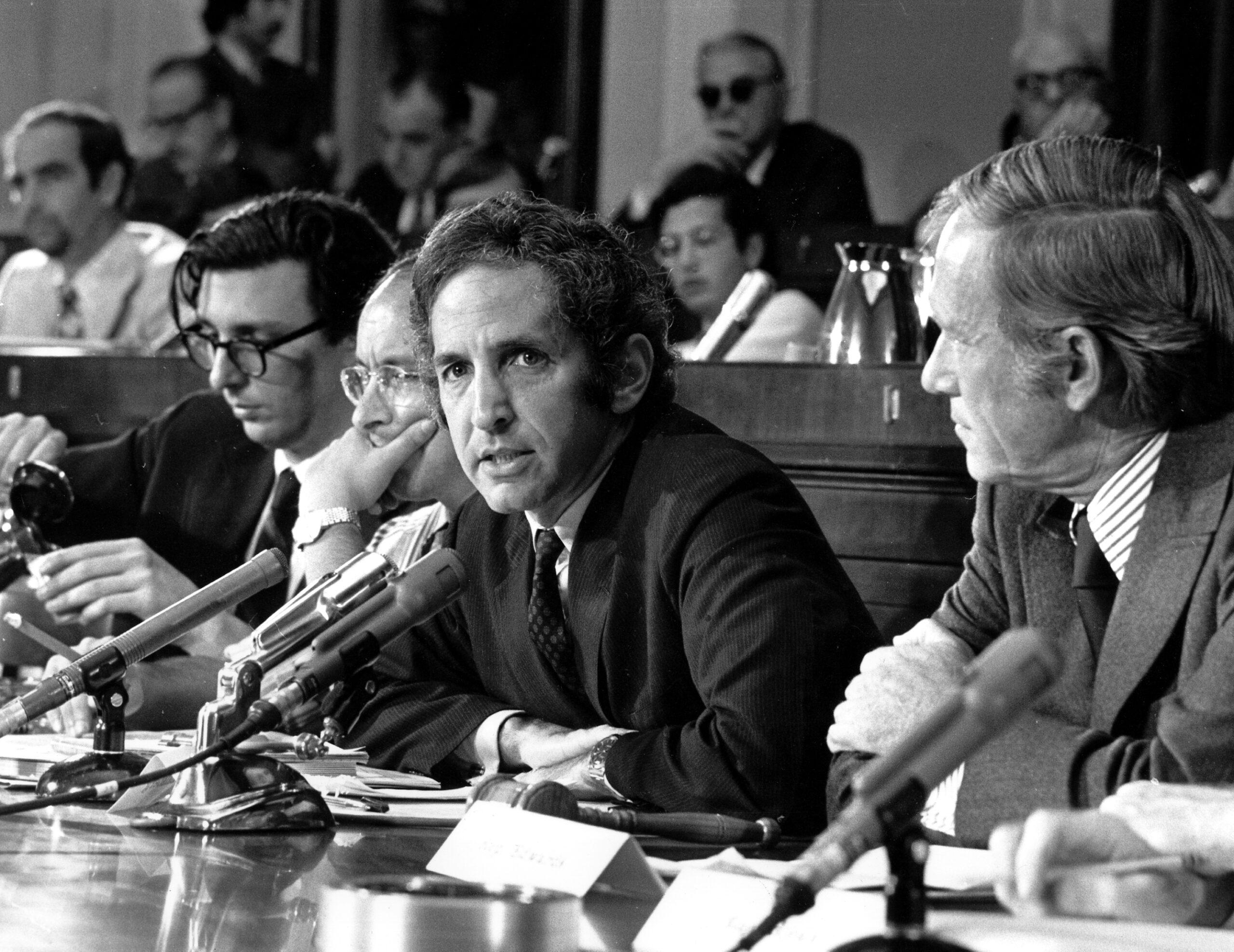 Daniel Ellsberg, the former Defense Department researcher who leaked top-secret Pentagon papers to the press, reports at the Capitol on July 28, 1971 to an unofficial House panel investigating the significance of the Vietnam War documents. (AP Photo)

For his final paper in Boston University School of Law Lecturer Robert M. Thomas’ Whistleblower Law & Practice class, Andrew Tran (’22) decided to research one of the most famous whistleblowers in history: Daniel Ellsberg, who, in 1971, gave reporters thousands of copies of top-secret documents detailing America’s involvement in the Vietnam War.

Tran and Thomas conducted a Zoom video call with Ellsberg—whom President Nixon’s national security advisor once called “the most dangerous man in America”—in November. Tran also reviewed White House tapes from the Richard Nixon Presidential Library and Museum and interviewed other legal scholars. The resulting paper traces the history of the Espionage Act of 1917, which Ellsberg was charged with violating (charges were dismissed in 1973 after the judge revealed the government sought to bribe him in the case). The paper also argues—as proposed recently in a bill by US Representative Tulsi Gabbard—for changes to the law that would allow a whistleblower to present their motive or intent as a form of defense.

Thomas, co-founder of the Whistleblower Law Collaborative LLC, a Boston-based law firm, has covered whistleblowing in the context of healthcare fraud and abuse in a course he has taught for more than a decade at BU Law. But last fall was the first time the school offered a more general whistleblower law course. Thomas says he came up with the idea because some of the scandals of the Trump Administration—including Trump’s phone call with Ukrainian President Volodymyr Zelensky, which led to the first impeachment trial—were revealed by whistleblowers.

“I thought it would be a crime not to teach that topic in this particular time frame,” Thomas explains.

Other students wrote papers on more recent whistleblowers. But Tran knew right away he would seek out Ellsberg, whom he had previously interviewed as a high school student in Orange County, California, for a short documentary on the Pentagon Papers. And Ellsberg isn’t Tran’s only encounter with a historic figure from the Vietnam era: as an undergraduate at Yale University, Tran took a seminar with Washington Post journalist Bob Woodward, who, among other major scoops, revealed the Watergate scandal (with the help of an anonymous whistleblower). Tran later helped Woodward write the script for his MasterClass on investigative journalism.

Tran and Thomas bonded over their shared personal interest in Ellsberg’s actions in the context of the Vietnam War, which they discovered in a conversation after their first class session. Tran’s grandfather had been the secretary of agriculture for the government of South Vietnam and had faced his own whistleblowing dilemma when American researchers brought him documentation of the harmful effects of Agent Orange exposure. Thomas wrote several undergraduate research papers on the Vietnam War, including one on the 1964 Gulf of Tonkin Resolution, which Congress passed to authorize the use of force in Vietnam and was based on misleading information—as subsequently revealed by Ellsberg.

“I was raised with the mythology of American greatness,” Thomas says. “And everything that was on the news [during the era of the Vietnam War and the civil rights movement] was challenging that mythology. So Andrew and I both came to the question of what really happened in Vietnam from deep levels of interest.”

They both say they learned a lot from Ellsberg about the so far unsuccessful efforts to make Espionage Act prosecutions fairer for defendants (such prosecutions increased under Presidents Obama and Trump). The problem, according to Tran’s paper, is that the law—passed by the 65th Congress in 1917—was meant to target spies but has also been used to punish and intimidate people who have sought to disclose classified information in the public’s interest.

“The 65th Congress could not have anticipated that… the Act would eventually and inevitably be blind to the difference between whistleblowers and spies,” Tran wrote in his paper.

After taking Thomas’ class last fall, Tran is now working as an extern at Thomas’ Whistleblower Law Collaborative, which focuses on federal and state False Claims Act and other whistleblower cases. So far, he has worked on drafting responses to a defendant’s motion to dismiss and revising briefs.

Thomas accepts BU Law students as externs throughout the year.

“It’s an obvious fit for us,” he says. “They’re familiar with the content, and I’ve already had a sneak peek at their talent level.”

“Bob would organize office hour sessions where we could just sit and talk about our careers, our lives, or anything else we wanted to discuss,” he says of the course last fall.

Up next for Tran is a summer associate position at Shearman & Sterling in New York. After that, he plans to spend a semester in Washington, DC. interning for NPR legal affairs correspondent Nina Totenberg. Thomas’ course touched on several of his interests, including journalism and media and First Amendment law.

“I had learned about whistleblowing from the historical perspective, but I had no idea what it was like from the legal perspective,” Tran says. “It was really worth my while to learn what happens when you decide to blow the whistle, the barriers you have to go through, and the potential rewards.”