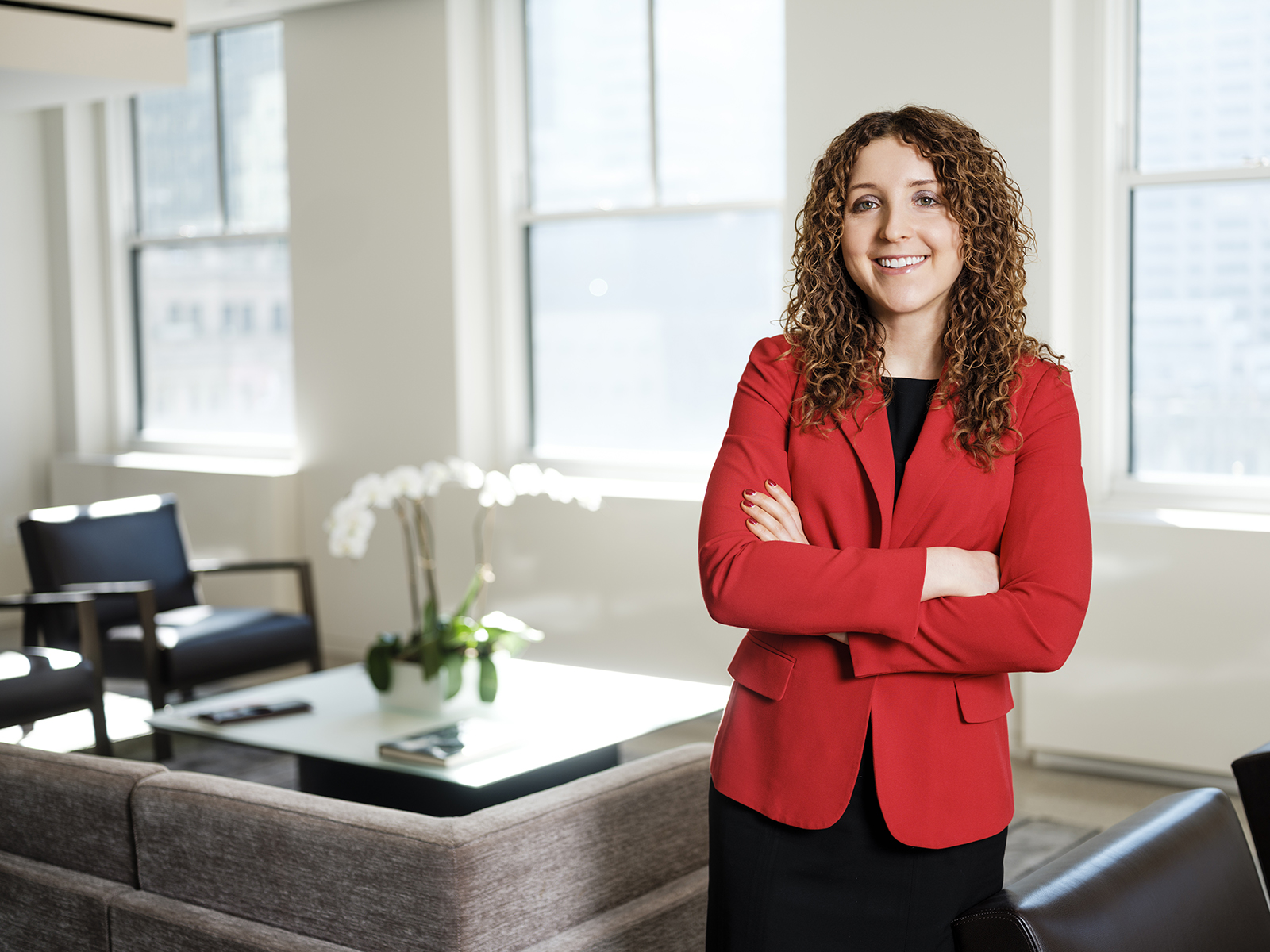 As a lawyer with impaired hearing, Anat Maytal (’09) has spent her life advocating for herself. Now, she spends her days doing the same for others.

“I’m not surprised that I picked a profession where I’m allowed to argue for a living, because my entire life I’ve had to be an advocate for myself,” says Maytal (’09), who lost much of her hearing after contracting viral meningitis as an infant. Arguing and negotiating are skills that come naturally to her, she says, and spending her childhood fighting negative stereotypes honed those talents.

Maytal is an associate in the Manhattan office of BakerHostetler, one of the country’s largest law firms, where she focuses on commercial litigation and employment and labor law. She joined the firm in 2010, when it was staffing up for its role as court-appointed counsel to Irving Picard (’66), the trustee overseeing the liquidation of Bernie Madoff’s investment firm.

The liquidation, which aims to recover money from those who profited from Madoff’s Ponzi scheme and return it to defrauded investors, is a large part of Maytal’s caseload. Early on, she helped with investigations—determining how much each investor gained or lost—and drafted complaints. She’s since been heavily involved in the discovery process, in motion practice, and in mediations. She’s drafted settlement agreements and appeared in court in the United States and the Cayman Islands. While Madoff’s scheme itself was despicable, she says, unraveling it has provided an incredible learning experience.

Picard says Maytal is a valuable member of the liquidation team. “She’s meticulous. She’s got a tireless work ethic,” he says. “She does excellent research. She writes very persuasively. She’s poised and professional—really a first-rate lawyer.”

When Maytal decided to become a lawyer, she didn’t imagine working for a big firm. “I thought I was going to be an assistant DA. I thought I was going to be the next Jack McCoy,” she says, referring to the hard-hitting district attorney on the television drama Law & Order. When choosing electives as a BU Law student, she says, “I always picked something criminal related—juvenile delinquency, a course on federal sentencing. I did the [Criminal Law Clinical Program], whatever I could get my hands on.”

But 2009 was a tough year to graduate with dreams of working for a New York DA’s office. “All five boroughs were facing budget cuts,” she says. “The Brooklyn DA’s office turned away applicants because they didn’t have the funds to pay their potential salaries.”

Maytal—a native of Queens, New York—instead took a job at a plaintiff-side class-action law firm in Manhattan. After a year, she moved to BakerHostetler and was surprised by how much she enjoyed the commercial and financial cases she tackled there. “I quickly realized this is the type of challenge I was looking for,” she says.

BakerHostetler also allows unlimited pro bono hours, and Maytal has taken full advantage—working with the Equal Justice Initiative of Montgomery, Ala., to help a death-row inmate appeal his sentence, representing low-income women in divorce and child-custody disputes, and guiding transgender people through the legal name-change process. She also coordinates her firm’s partnership with the New York City Law Department, which she says “is the entity that gets sued any time something happens in the city—a garbage truck hits your car, or a tree falls on you in the park.”

When I was in college, the idea of being a lawyer was in the back of my mind, but I didn’t have any representation of lawyers who were deaf or hard of hearing.

In 2016, the American Bar Association named Maytal one of its top 40 young lawyers, recognizing her work with the Deaf and Hard of Hearing Bar Association (DHHBA), which she cofounded in 2014. A nonprofit, the DHHBA helps legal professionals with hearing disabilities connect with and support one another.

“When I was in college, the idea of being a lawyer was in the back of my mind,” Maytal says, “but I didn’t have any representation of lawyers who were deaf or hard of hearing.” To discover whether and how people with hearing disabilities could practice law, she contacted nonprofit organizations and dug through online message boards. She eventually met attorneys with hearing disabilities, but the process could have been easier— and today it is. The DHHBA has a website, Facebook pages, and a listserv where students and legal professionals with hearing disabilities can find resources and make personal connections.

The DHHBA received nationwide media coverage in 2016 when Maytal organized a group swearing-in ceremony to admit some of its members to the Bar of the United States Supreme Court. While the court gladly provided sign language interpreters for the deaf attorneys in the group, Maytal says, it took some negotiating to arrange the real-time captioning she and other hard-of-hearing lawyers rely on. Ultimately, the court agreed to create a restricted Wi-Fi network that allowed Maytal and her colleagues to access the official court reporter’s transcription of the proceeding on their personal tablets and smartphones.

“The Supreme Court had never allowed these devices into the courtroom before, so I think that’s why the ceremony got a lot of attention,” Maytal says. “After the swearing-in, we got so much feedback. We had attorneys reaching out to us, saying, ‘I never knew such an organization existed.’ We had students saying, ‘I didn’t even know this was an option for me.’”

Maytal sometimes attracts similar attention when she uses assistive devices in the courtroom. Older attorneys with age-related hearing loss have approached her in court, she says, to ask about the technologies.

Maytal wears a hearing aid in her left ear and five years ago received a cochlear implant that dramatically improved the hearing in her right ear. Her hearing remains limited, however, so she uses a variety of techniques and technologies to navigate the law firm and the courtroom.

“In my office, I have a captioned phone that I often use to fill in the gaps in the conversation,” she says. “I do try to schedule more in-person meetings instead of relying all the time on the phone, which actually has proven to be beneficial, as it helps to build stronger relationships with my colleagues and clients.”

In the courtroom, she provides judges and witnesses an FM microphone that broadcasts directly to her hearing aid. In federal court, the court reporters are connected to a wireless system—similar to the one she used at the Supreme Court—that lets her read the transcription on her computer screen. “State court is a bit more challenging because they have very small budgets and don’t have the same kind of sophisticated court-reporting system,” she says. “There, I rely more on my FM microphone system and working with the court and opposing counsel to make sure I can hear them.”

At the beginning of her law career, Maytal was hesitant to use her assistive devices in court. She didn’t like drawing attention to herself, and she feared people would jump to unfair conclusions about her abilities. “But I realized,” she says, “that in order to be a better advocate for others, I have to be my strongest advocate. So I pushed through.”