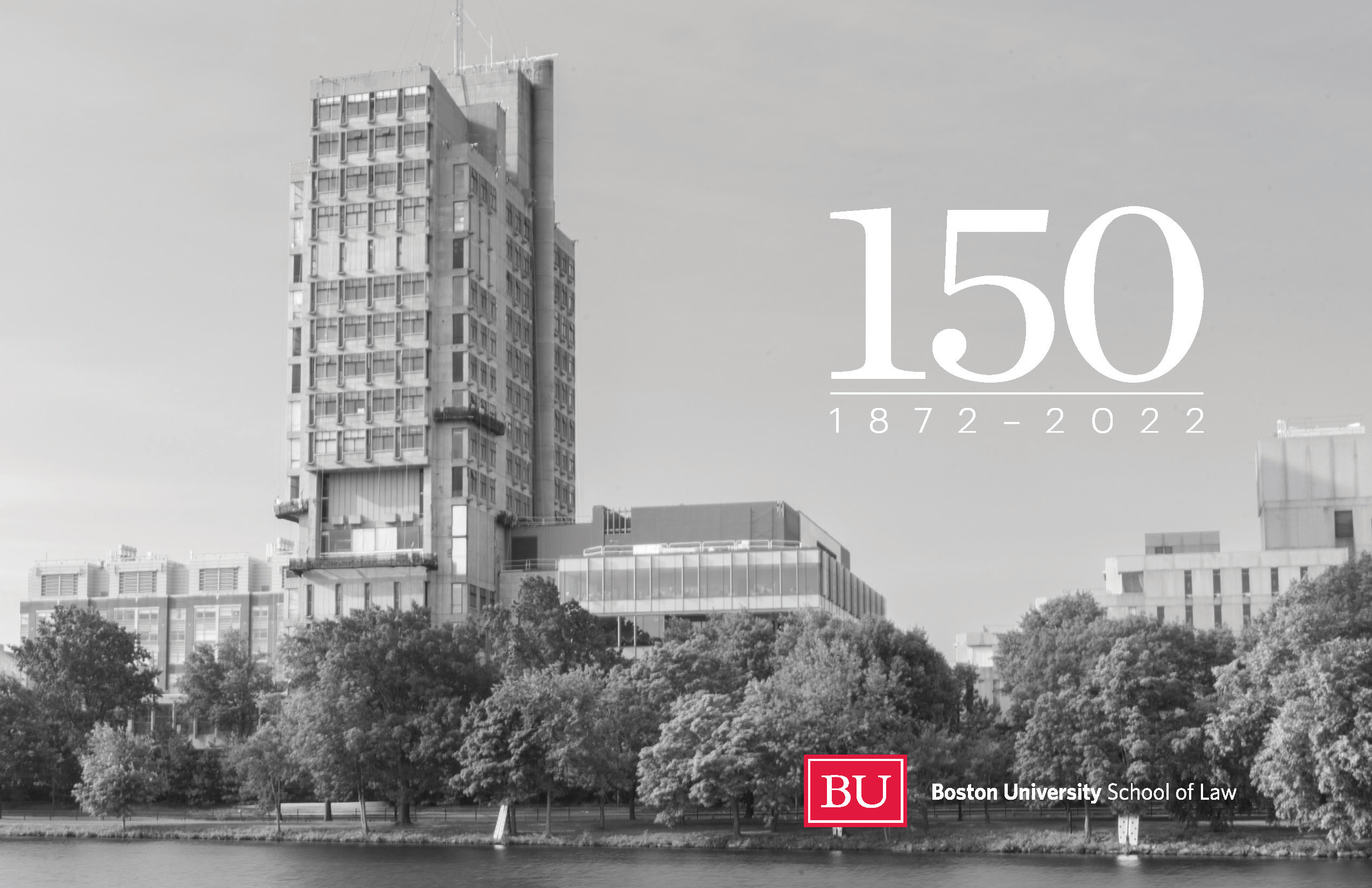 In the fall of 2022, Boston University School of Law will celebrate the 150th anniversary of its founding. This milestone will be celebrated throughout the 2022-23 academic year, with special events and other opportunities to connect, as well as the release of a commemorative book. We invite all members of the Boston University School of Law community—past and present—to celebrate this significant achievement with us, as you are all part of our rich history.

On Saturday, October 1, we will kick off BU Law’s sesquicentennial celebration with our 150th Anniversary Gala at BU’s George Sherman Union right next door to the law complex. The gala will be an opportunity for our alumni, students, faculty, staff, and friends to come together to celebrate the school’s impressive 150-year legacy of impact on law and society. Tickets to the gala are $150 and will go on sale in July.

Noted sociopolitical comedian and filmmaker is the featured guest for our sesquicentennial celebration.

W. Kamau Bell is a stand-up comedian and the host and executive producer of the Emmy Award–winning CNN series United Shades of America with W. Kamau Bell, which follows Bell as he explores communities across America to understand the unique challenges they face. The docu-series has considered topics ranging from the future of coal country to the water crisis in Flint, Michigan, to the experience of immigrants, refugees, and asylum seekers in the United States.

Bell’s four-part documentary series We Need to Talk About Cosby premiered at the Sundance Film Festival in January and is now streaming on Showtime. His latest stand-up comedy special, Private School Negro, is available on Netflix.

W. Kamau Bell is the ACLU Celebrity Ambassador for Racial Justice and serves on the advisory boards of Right to Be (formerly Hollaback!) and Donors Choose.

Through his signature sociopolitical comedic lens, Bell will offer reflections on BU Law’s 150-year history, its founding commitment to advancing equity and justice, and how students, faculty, and alumni may extend its impact over the next 150 years.

Rikki Klieman (’75) Will Serve as Master of Ceremonies

CBS legal analyst Rikki Klieman (’75) will emcee the evening’s festivities. Named one of the top five woman attorneys in the US by Time magazine, Klieman rose to prominence when she joined Court TV to anchor its coverage of the OJ Simpson trial. In addition to CBS and Court TV, Klieman has provided legal analysis for NBC, the Daily Beast, and E! Network, and she has played the role of lawyer or judge on shows like Blue Bloods, Sharks, and Law & Order.

East Coast Soul’s Daptone Ensemble will provide the evening’s musical entertainment. Featuring Boston-area artists Jon Gramling and Monica Espinoza, among others, the Daptone Ensemble performs the best classic and contemporary music across all genres with grit, funk, and their own soulful style.

BU Law’s Reunion Weekend will be held in conjunction with the University’s Alumni Weekend 2022, featuring a variety of other events and activities across the campus and throughout the city for BU alumni.

Did you know…That Boston University School of Law created the three-year program of courses now standard in legal education? Or that Class of 1883 alum Wilford H. Smith’s litigation paved the way for increased voting rights for Black Americans? Or that Bradford Morse (LLM’49) led the United Nations Development Programme for 12 years?

As the 150th anniversary of BU Law’s founding draws near, we are hard at work on a commemorative book—forthcoming in fall 2022—that will feature 150 profiles of people, places, and events that have shaped the school and the world. We look forward to sharing this work with you as we celebrate our community’s history and set a course for the next 150 years of excellence in legal education at BU Law.