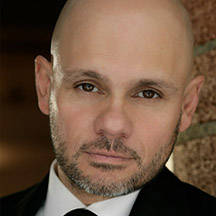 Hailed by the Tampa Bay Times as the “one to watch,” Colombian tenor David Guzman is known for his exquisite tone and impeccable musicianship.  He has been praised for his “impressive tenor, singing with force and ease throughout his range, with ringing tone at full voice, thoughtful in quieter moments.” (Houston Chronicle).

Dr. Guzman most recent performances include Haydn’s The Creation and Orff’s Carmina Burana with Hudson Valley Singers in New York City,  the title role of Offenbachs’ Orpheus in the Underworld in a return engagement with Western Plains Opera, Alfredo in La Traviata with Sarasota Opera, the tenor soloist in Carmina Burana with both the Minot Symphony Association and the Hartford Symphony. Other performances include the Duke in Rigoletto with Opera Tampa, Rafael of Foglia/Martinez’s To Cross the Face of the Moon with Arizona Opera, as well as performances with Lyric Opera of San Diego, Lyric Opera of Chicago, Houston Grand Opera and at the Theatre du Chatelet in Paris.