There is a saying in events management, “If the event goes well, the client is congratulated. If the event goes wrong, blame the event planner.” This saying holds true when cities bid, plan and execute a spotlight event, such as the 2016 Democratic National Convention (DNC). The 2016 DNC was held in Philadelphia, Pennsylvania July 25th-30th with approximately 50,000 stakeholders who traveled to the city. These stakeholders were comprised of 6,000 delegates with families or constituents, 20,000 media and 24,000 guest, VIPs, dignitaries, donors and “Friends of the Party.”

What exactly is a spotlight event?

Cities are enticed to host such events because of the direct and indirect economic potential they bring. They also serve as a way for the city to reposition or rebrand its image within the country as a whole. Hosting a spotlight event such as a national political convention is a major feather in a city’s tourism cap.

With spotlight events, all segments of the tourism industry benefit from the offerings presented to the lodging, culinary, retail, and transportation sectors. During the recent DNC in Philadelphia, both hotel occupancy and hotel revenue increased by 10.3% and $16.3 million respectively as compared to the same period in 2015. RevPAR (Revenue Per Available Room) was 6.6% ahead it of what it was during the same time the prior year. It is predicted that the city generated approximately $200M from the DNC, pending a final report which will be released in late fall of 2016.

The Philadelphia 2016 DNC Host Committee and the Democratic National Convention Committee (DNCC), the two independent yet collaborative entities, worked together to ensure that diversity and inclusion were the primary themes of the event, and that hospitality was fully incorporated into the themes execution. A specific initiative called the Philly Ambassador Program was a substantial element in carrying out these themes.

The Philadelphia DNC Host Committee, a nonprofit organization, was responsible for raising funds and offering the city’s amenities. These funds help support and sustain the following: [1]

The Host Committee was comprised of leaders with varying backgrounds including professionals of the lodging, events, and restaurant industries. The committee assembled 10,000 volunteers to assist with all the needs before, during, and after the convention. A select 60 volunteers were selected to into the Philly Ambassador Program; which provided additional “concierge-like” services to visiting delegates. The selection process of these ambassadors was based on the volunteer’s knowledge of Philadelphia and the surrounding area, hospitality experience and the spirit to serve. The Host Committee used this best practice as a result of their previous experience during the 2000 RNC and then crafted four initiatives to ensure smooth hospitality and a welcoming ambiance:

Initiative #1. The “Donkey’s Around Town” was an installation of 57 fiberglass donkeys, each painted by a local artist, to represent a participating Convention delegation. They were placed in publicly accessible locations across the city and were also used to create a warm reception for delegates at their respective host hotels.

Initiative #2. The Pennsylvania State assembly passed a bill known as The Fiscal Code which allowed bars holding convention-related events to apply for special permits to stay open later than usual. This gesture acknowledged that the hospitality industry was a significant part of the Convention activities.

Initiative #3. Uber hosted a hospitality tent at the designated pick up and drop off areas at the Wells Fargo Center, the primary venue for the televised portion of the DNC. The tent included charging stations, Wi-Fi, bottled water, and light refreshments. During the last day of the convention, on Thursday, Uber provided ponchos and arranged for staff to escort riders from their Uber to the tent with umbrellas.

Initiative #4. The positive outreach from the Philly Ambassadors were supplemented by the equally positive welcome and friendliness of the local police. During the 2000 Republican National Convention, Philadelphia suffered scrutiny after the police arrested nearly 400 protesters resulting in numerous lawsuits. It is not unusual for activists to use a spotlight event to “spotlight” their own causes. However, for the 2016 DNC, Philadelphia designated specific, safe spaces for protesters and provided sensitivity training to both city police and all volunteers. 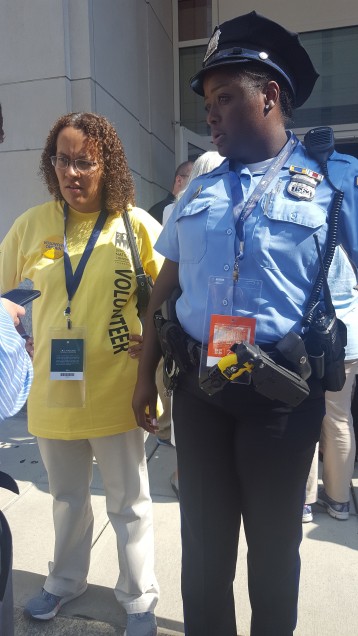 Diversity and Inclusion Planning Used with a Spotlight Event

The Democratic National Committee is the principal governing organization of the United States Democratic Party. In regards to this spotlight event, the Committee is therefore “the client” and worked closely with the local Host Committee in logistics planning and execution. The mission of the DNC is to present the Party’s nominee for President (Secretary Hilary Clinton) and share the Party’s platform to the delegates and the media during the Convention. This year the platform included civil rights, women’s rights, LGBT rights, rights of people with disabilities, and the protection of voting rights, placing diversity, inclusion and equality as the central theme.

This theme was also translated into the event itself. Inside the Wells Fargo Center were designated spaces for prayer, nursing, ADA services, recovery and wellness, a quiet room, and a first for the Convention, all-gender restrooms. The attention that was given to diversity and inclusion was paramount and notable.

Inclusion planning also considered guests with special needs via “convention troubleshooting” preparations. Delegates and attendees with special needs were provided with designated areas, and scheduled timelines were orchestrated to ensure that everyone was accommodated. For example, protesters inside the arena who supported Bernie Sanders were just as welcomed as Hillary Clinton supporters. In fact, unlike other political officials, Bernie Sanders was present at the DNC the entire week.

Outside of the Wells Fargo Center, protesters were given bottled water, EMT’s were stationed for health emergencies, and the city police was requested to not wear riot gear. This set an overall tone of a non-confrontational and inclusive environment.

Unfortunately, if something goes terribly wrong during a spotlight event, the city itself can be remembered with lasting negative images. As previously mentioned, Philadelphia was still remembered for the large number of protester arrest during the 2000 RNC. Chicago is still reminded of the images of the riot-plagued 1968 DNC convention, let alone  Miami for the 1972 DNC in terms of a sheer fiasco, or even the 1868 DNC held in New York City whose slogan was “This is a white man’s country, Let a white man rule”. The Convention has come a long way since these times as this change has been recorded and duly noted.

Therefore, with all of the bidding, planning and logistical needs of a spotlight event, the event overwhelmingly helps put a city on the map in terms of travel, tourism, and business environment. Further success is most often found when personalized hospitality is provided to all stakeholders. Even more, when themes like the 2016 DNC’s diversity and inclusion are genuinely felt throughout all aspects of the event, the city, organizing entities, and event are elevated into long-lasting positive spotlight moment.

Erinn Tucker, Ph.D. is an Assistant Professor in the School Tourism and Hospitality Management at Temple University. She has 20 years of corporate and academic experience. Her teaching and research is in the areas of event management and student engagement. She holds a bachelor’s degree in business administration from Florida A&M University, a master’s degree in sport administration from Florida State University and a Master’s in Business Administration (MBA) from Winthrop University and Ph.D. in Hospitality Administration from Oklahoma State University. Dr. Tucker served as a Philadelphia Host Volunteer Ambassador and was also on the Trouble Shooting Team during the 2016 Democratic National Convention. Email: erinn.tucker@temple.edu or Twitter @erinntucker

Leora Halpern Lanz is President of LHL Communications and a full time lecturer at Boston University’s School of Hospitality Administration. A graduate of Cornell University with a Masters from Boston University, Leora served for 15 years as Global Director of Marketing for HVS, one of the leading hospitality consultancies, 10 years as Director of Public Relations and Advertising for the ITT Sheraton Hotels of New York, and 5 years as the Director of Public Relations for the Greater Boston Convention & Visitors Bureau. During her Sheraton tenure, she actively facilitated the public relations, hospitality and logistical details at the 1992 DNC headquarter hotel, the Sheraton New York. Email: leora@lhlcommunications.com or lhlanz@bu.edu Twitter @LeoraLanz2.

Juan Lesmes is a rising senior at Boston University’s School of Hospitality Administration (SHA). His studies and areas of interest include hospitality media relations and integrated marketing communications. Juan’s previous experience includes work at public relations firm DataMedia Communications Group and at digital marketing platform Let’s Get Weddy in London. He is currently working with LHL Communications and The Ritz London. Beyond his studies at SHA, he serves as co-founder and marketing coordinator of Boston University’s International Society. After graduation, Juan intends to continue his studies in hospitality marketing and communications.