PKF Consulting USA (PKFC) and PKF Hospitality Research (PKF-HR) are respected sources for sound decision-making in the hospitality and real estate industries. We apply our skills to discover the unique aspects of an opportunity for our clients, and to develop practical solutions that can be initiated efficiently, successfully, and profitably. Core areas of expertise include applied research, market studies, real estate appraisals, asset management, financial benchmarking, and econometric forecasting.

Performance and forecast data used in this article are sourced from PKFC’s Boston Trends in the Hotel Industry® and PKF-HR’s Hotel Horizons® September-November 2014 Edition. Boston Trends® compiles performance data from approximately 100 hotels in the Greater Boston area, published in a monthly report used by hoteliers, management companies, owners, and other associations as a benchmarking resource and an operational aid. Hotel Horizons® is a quarterly econometric hotel forecasting publication that projects five years of supply, demand, occupancy, ADR, and RevPAR for 55 lodging markets in the U.S. A variety of economic, demographic, and other benchmarking statistics are also presented for more accurate forecasting, and allowing a deeper understanding of market conditions for the reader.

The city of Boston features many demand generators that attract leisure, corporate, and group travel. A city with rich American history, wide array of businesses, and strong convention center programming, Boston’s lodging market is a popular destination for both transient and group travel.

The greater Boston lodging market is relatively small by comparison to other primary U.S. markets, with approximately 51,000 hotel rooms across six submarkets: Downtown/Airport, Woburn/Tewksbury Northwest, Southshore, Cambridge/Waltham, Dedham/Marlborough, and Andover/Danvers Northeast. Below is a breakdown of each submarket.

According to PKF-HR’s Hotel Horizons® report, among the 55 U.S. markets forecasted by PKF-HR, the Boston lodging market is forecast to rank #11 in occupancy, #5 in average daily rate (ADR), and #5 in RevPAR for year-end 2014. Looking at compound average annual growth (CAAG) from 2009 to 2013, the Boston market ranked #37 in demand growth (a lower ranking due to the market’s strong occupancy levels), #9 in ADR growth, and #12 in RevPAR growth.

Greater Boston’s strong lodging performance can be attributed to its multitude of demand generators, a thriving economic base, and limited hotel development. Since 2010, Boston’s occupancy level has been greater than the national average by 10 to 11 percentage points. Boston’s CAAG ADR growth from 2009 to 2013 was 4.4 percent, ranking #9 among the Top 25 U.S. Markets, which averaged 3.4 percent for the same period.

Due to strong occupancy levels, increasing ADRs, and minimal supply increases, RevPAR for the Boston market has experienced positive performance over the past several years. In 2013, RevPAR grew by 5.5 percent, with growth weighted by ADR. ADR growth has been higher than that of occupancy growth since 2011, as the Boston lodging market began recapturing demand quickly following the end of the recession, thus allowing hotels to increase their rates faster than other markets with an established base of demand.

Of the six submarkets, the Andover/Danvers Northeast submarket experienced the highest percent increase in RevPAR of 7.3 percent in 2013. The Woburn/Tewksbury and Dedham/Marlborough submarkets also achieved high RevPAR growth of 6.0 and 5.9 percent, respectively.

Route 128, Route 495 North, and Route 495 South comprise the Boston Suburbs within PKFC’s Boston Trends®. These submarkets experienced a 4.3 percent increase in occupancy YTD through July 2014 compared to the same period in 2013, while the Boston Core hotels achieved a 0.6 percent increase. This is evidence of the compression created that is benefitting the lower-priced suburban submarkets. Additionally, from the guest standpoint, most properties in the suburbs are a bargain compared to the hotel rates in the Boston Core. The YTD increase in both occupancy and rate led to an average RevPAR increase of 10.1 percent for the Boston suburbs submarket through July. 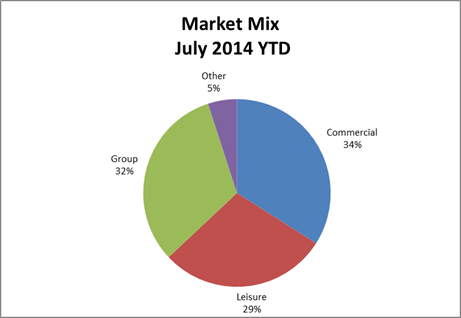 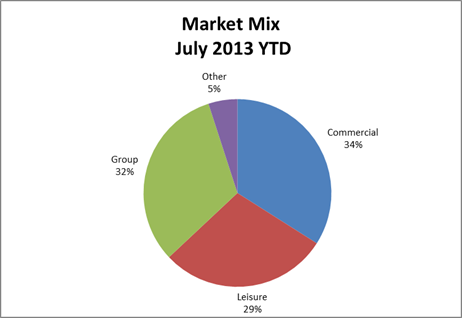 The city of Boston is home to two convention centers, the Boston Convention and Exhibition Center (BCEC) in the Seaport District, and the John B. Hynes Veterans Memorial Convention Center (Hynes) in the Back Bay neighborhood. Unique to Boston, both convention centers were awarded gold standard certifications by the International Association of Conference Centers (IACC). The Massachusetts Convention Center Authority (MCCA) operates both the BCEC and Hynes, which have 516,000 and 193,000 square feet, respectively.

After a down-year in 2013, total citywide conventions, defined as 2,000 roomnights on peak or greater, are forecast to increase 54.6 percent in 2014. After two years of forecast slight decreases, in 2017 total citywides are expected to reach 456,000 roomnights, a 15.4 percent increase from 2016F. The following table presents the actual and projected citywide convention demand between 2004 and 2013 and projections for 2014 through 2018. 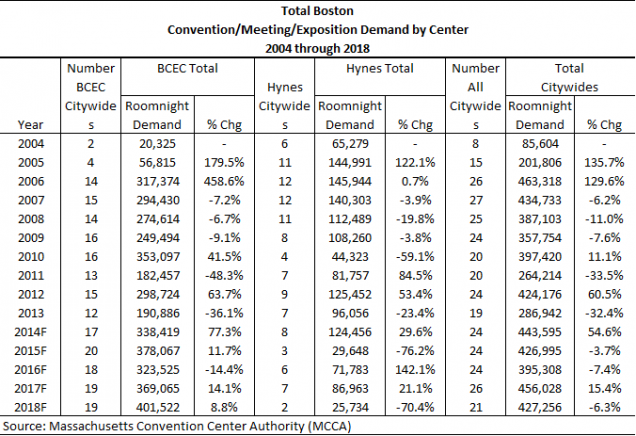 While Boston has historically been among the nation’s top destinations for meeting and conventions, there are certain challenges that must be addressed to improve the convention center’s competitive positioning. According to a strategic development plan by Sasaki Associates, there are concerns regarding space at the BCEC and the Seaport District’s lack of a critical mass of hotel rooms, which results in excessive transportation costs for large events. The study also points to the lack of “mid-priced” hotel rooms in the greater Boston market. The expansion goal would move Boston from eighth among the top ten meeting/convention destinations in the nation to a position among the top five.

In July 2014, Governor Deval Patrick signed legislation that permits the MCCA to move forward with their BCEC expansion plan without increasing existing fees or taxes. The $1B plan calls for a 1.3MM square foot expansion that incorporates a second ballroom and additional exhibition and meeting space.

Near the BCEC, construction of an aloft and an element hotel is underway, with a combination of 510 total rooms, both scheduled to open Q1 2016. Additionally, a 1,200- to 1,500-room headquarters hotel is planned to be built cooperatively by the MCCA and Massachusetts Port Authority, across the street from the BCEC. Request for qualifications of the developers were submitted in April, and a developer is expected to be chosen by the end of this year.  According to the MCCA, the BCEC expansion and the hotel developments are expected to generate $716 million annually in economic impact.

The Boston area is expected to see new development of a hotel and casino. Wynn Resorts recently beat Mohegan Sun for the single Boston area casino license now to be located in Everett, proposing a development geared toward attracting higher-end visitors and from outside New England, to be located in Everett. These casino developments aim to be the source for the economic development and revitalization of these neighborhoods, though traffic and area housing are still items for discussion. The greater Boston casino license is estimated to generate $700M annually in gambling revenue and create a substantial number of jobs for nearby citizens. 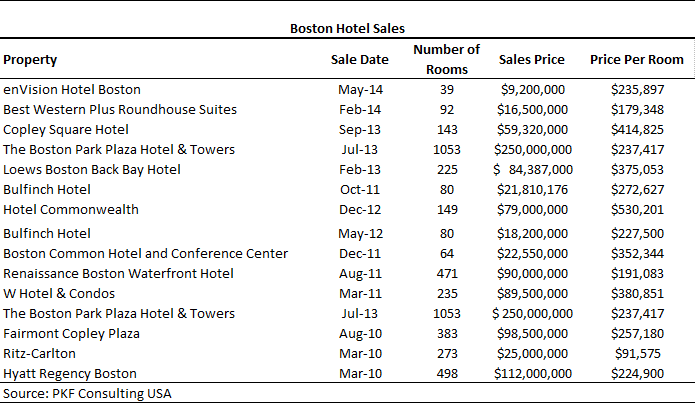 Boston has seen a healthy level of hotel transactions over the last few years. Between March 2010 and May 2014, fifteen Boston hotels sold between $91,575 and $530,201 per key. These have been predominantly full-service assets, due to the current lodging cycle in which select-service hotels are more feasible to build and full-service are often more cost-effective to buy. Hotel transactions are expected to continue into the next handful of quarters, as investors are encouraged by the strong historical and projected performance of the Boston market, remaining projected upside, availability of equity, the loosening debt market for acquisitions of existing properties, and the interest in solid assets in gateway markets like Boston. The following table presents hotels within the Boston that have transacted since March 2010.

The Boston lodging market is expected to continue to perform strongly relative to the rest of the nation. On average, Boston hotels are forecast to see a 9.9 percent increase in RevPAR in 2013, greater than the 5.5 percent increase in RevPAR in 2013. Occupancy is projected to increase through 2015 achieving record high levels, before adjusting to a more stabilized level as new supply is absorbed. RevPAR is forecast to increase by a 5.8 percent CAAG through 2018, driven predominantly by increases in ADR.

The greater Boston lodging market has flourished in the recent past. For 2014, hotel occupancies are expected to finish at the highest levels they have been in several years. Average daily rate growth has experienced positive growth since 2010 and ADR is projected to surpass $200 by 2016 for upper- and lower-priced hotels combined.  This positive growth in both demand and ADR is expected to continue and lead to an increase in supply in the years to come. ■

About the data
Performance and forecast data used in this article are sourced from PKFC’s Boston Trends in the Hotel Industry® and PKF-HR’s Hotel Horizons® September-November 2014 Edition. Boston Trends® compiles performance data from approximately 100 hotels in the Greater Boston area, published in a monthly report used by hoteliers, management companies, owners, and other associations as a benchmarking resource and an operational aid. Hotel Horizons® is a quarterly econometric hotel forecasting publication that projects five years of supply, demand, occupancy, ADR, and RevPAR for 55 lodging markets in the U.S.

Andrea Foster is Vice President; Practice Leader, New England; and the National Director of Spa Consulting for PKF Consulting USA, LLC (PKFC), A CBRE Company.  She has nearly 20 years of experience within the lodging industry with a wide range of operations, marketing, business development, financial, and consulting expertise.  Ms. Foster was also with PKFC from 2002 to 2006 in the firm’s Los Angeles office.  She now heads up the Boston office of PKFC.She can be reached at andrea.foster@pkfc.com, or (617)488-7290. Jenna Finkelstein, Consultant, also contributed to the preparation of this article.