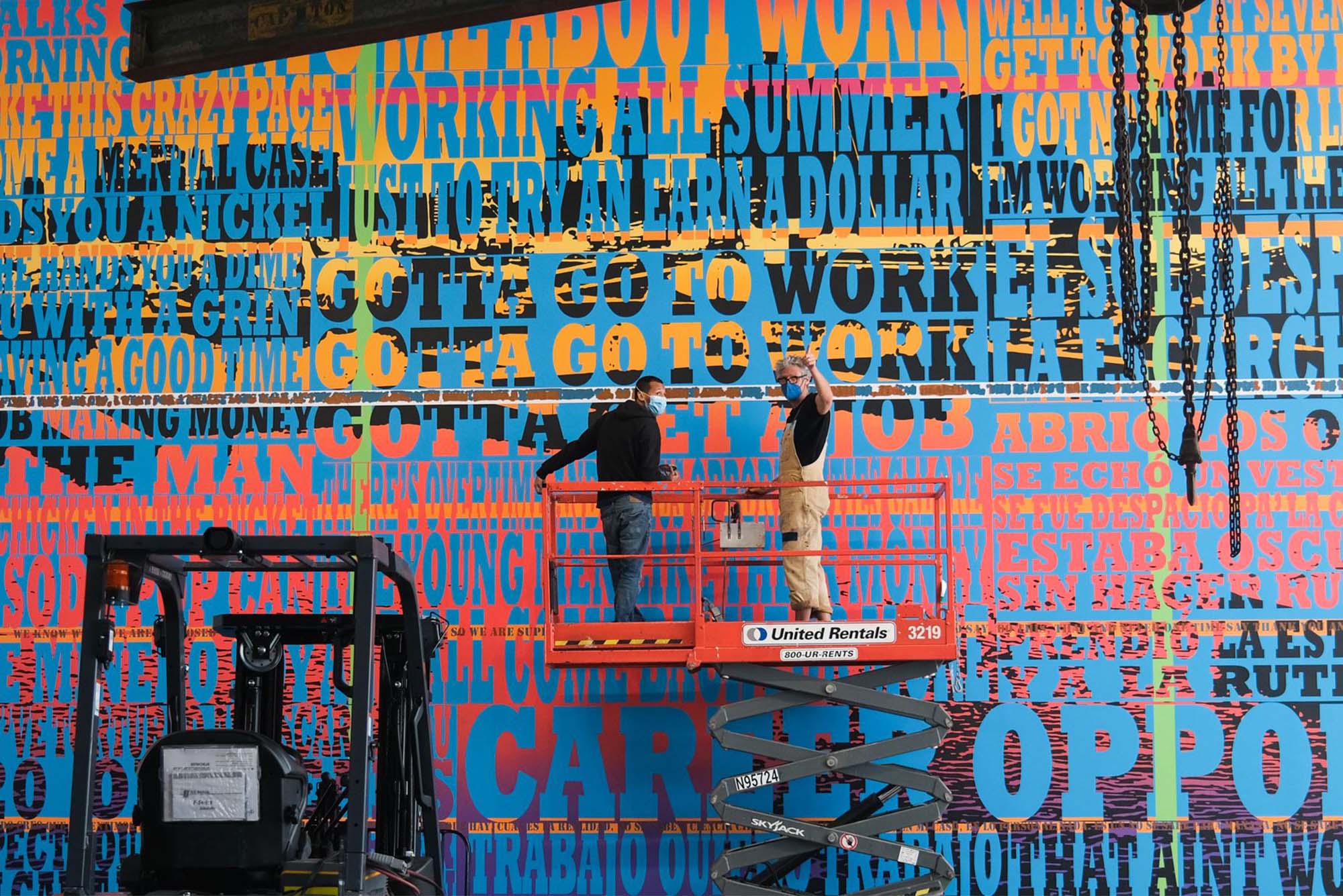 Words on Labor, Writ Large at the ICA Watershed

I NEED A GODDAMN JOB

AND THEN THEY EXPECT YOU TO PICK A CAREER

WORKING ALL SUMMER JUST TO TRY TO EARN A DOLLAR

The words, taken from song lyrics and worker interviews, pile up into found poetry. They call out man’s relation to his labor, the worker’s relation to the boss, the fraught balancing of self-respect and the need to earn a paycheck.

That the words are painted on the walls of the ICA Watershed, a renovated World War II–era copper pipe and sheet metal shop on the East Boston docks, adds another layer of meaning. You want symbolism? Chains hang from an old winch mounted on a steel girder nearby.

“It being East Boston and the Watershed, there’s just so much room to do that. The ideas kept spilling out,” Wardwell says on a Zoom call from Siena, Italy, where he is running a summer art program for 25 Brandeis students.

Wardwell’s work, on display through September 5, is the only new commission among large pieces from six different artists that make up this year’s Watershed group exhibition Revival: Materials and Monumental Forms. They grapple with labor and sacrifice, sustainability and reuse, the way the world economy grinds down some and lifts up others. Wardwell’s piece in particular plays off carefully retained echoes of the site’s World War II–era industrial past.

“Every artist you bring in here is really struck by the building, the cinder block walls, the kind of marks snaking across it, these railroad tracks that hauled material in and out, this long truss up top,” says Ruth Erickson, the ICA/Boston Mannion Family Curator, who organized the show with curatorial assistant Anni Pullagura.

“I was especially interested in this idea of reuse, repair, and the ways artists use existing materials and images to give birth to something new,” Erickson says, “especially as they reflect back on histories of labor.”

Lately, Wardwell has specialized in works incorporating large-font text, often song lyrics. In Gotta Go to Work, rock and folk fans will recognize words from songs by John Lennon, the Clash, Billy Bragg, and Woody Guthrie, about working class heroes, their hopes and fears and struggles.

Wardwell’s use of quotes is “punchy and provocative and really meets the moment,” Erickson says. Frontline worker rights and unionization struggles at employers like Amazon and Starbucks have become front-page news during the pandemic.

Inserted among the song lyrics are texts, taken from interviews with workers collected as part of the Cascading Lives project conducted by Wardwell’s Brandeis colleagues. Beginning in 2020, they’ve been collecting life stories of hospitality industry workers in Massachusetts and Georgia, stories of hard work, economic ups and downs, and how work (and sometimes the lack of it) has shaped those lives.

The words are stenciled and layered in acrylic over relevant background images simplified to near abstraction. Look closely at Gotta Go to Work and you’ll recognize Boston’s downtown skyscrapers across the water in the background of one wall, the working-class, immigrant-rich neighborhoods of Chelsea and Eastie on the other. It’s not an accident that some of the words are in Spanish.

“So you go from the large scale of the landscape to the point of commonality of the lyrics to the individual level of the interviews, talking about their day-to-day experience during COVID,” Wardwell says. “I wanted that complexity of different levels.”

Outside the Watershed, sailboats and powerboats dock where pipes and sheet metal fabricated in the building were once welded into warships, and the streets leading here to the space are chockablock with construction sites as the waterfront rapidly gentrifies. But a lot of neighborhood residents are still too busy trying to make a living to come to the ICA Watershed on a weekday afternoon even if they were so inclined.

On this and many other summer days, buses bring students from city neighborhoods to tour the exhibition. Maybe some of these young people will make the connection between Wardwell’s oversized words towering above them and their parents’ working lives.

An exhibition of large-scale installations by six international artists who reclaim and reuse industrial and everyday materials. Open 11 am- to 5 pm, Tuesday to Sunday, through September 5. Admission is free with a timed ticket to the ICA.

Words on Labor, Writ Large at the ICA Watershed

Words on Labor, Writ Large at the ICA Watershed
0
share this