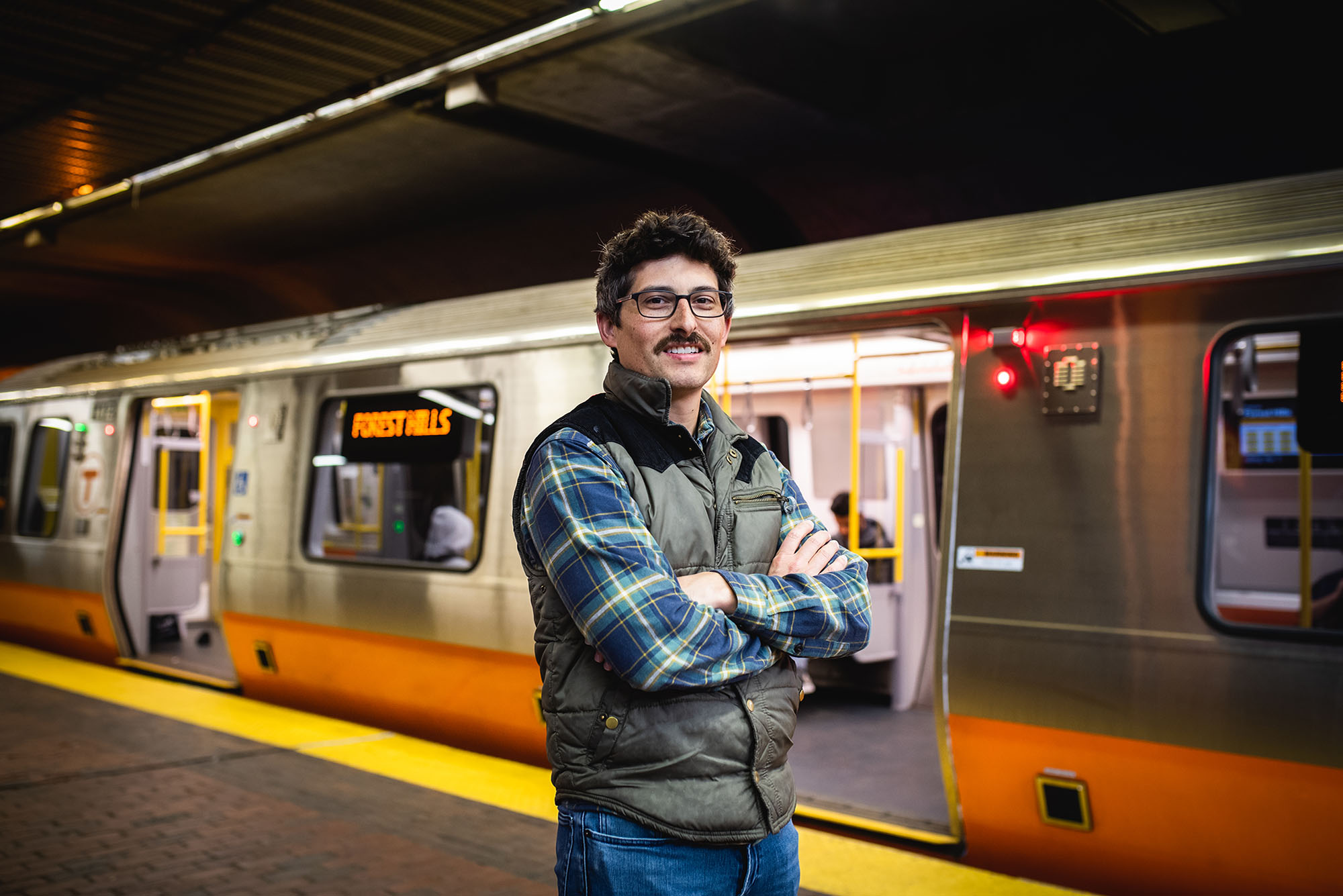 Josh Fairchild (LAW’13), board president of TransitMatters, says the MBTA’s recent Orange Line shutdown could have been prevented through strategic changes in service hours.

The MBTA Has Problems. This Alum’s Advocacy Group Has Answers

Josh Fairchild, a local commercial real estate lawyer and self-described “transit enthusiast,” was riding the Green Line to Coolidge Corner when he came across an episode of the podcast TransitMatters that was all about initiatives for the MBTA line he was on. Before leaving the train, he reached out to share some of his own research. Not long after securing a guest spot on the show, Fairchild (LAW’13) convinced cohosts Jeremy Mendelson and Marc Ebuña to expand their impact on Boston-area transit by forming a nonprofit.

Nearly eight years later, TransitMatters is a thriving advocacy group that relies on a local network of transit enthusiasts, experts, and practitioners to inform the public about MBTA news and initiatives. With Fairchild as president of the board of directors, the organization also champions policies and solutions—such as regional rail, fare reduction, and overnight bus services—that promote “convenient, effective, and equitable transportation for everyone.”

Following a flurry of negative headlines about the MBTA’s disorganized Orange Line shutdown and a scathing Federal Transit Administration report on the agency’s inability to maintain safety standards, Fairchild spoke with Bostonia about the state of the nation’s oldest public transit system.

Bostonia: The MBTA’s dysfunctionality isn’t really a surprise to most, but in your view, how did we get to the point where the FTA is getting involved?

Fairchild: When the Fiscal and Management Control Board came on [in 2015, to monitor the MBTA], there were some constraints that were put in place. In order to meet those constraints, the T did early retirements without hiring replacements, and they transferred money from the operating budget to the capital budget. The thing the FTA is pointing out is that the T has prioritized these capital projects at the expense of safety and regular maintenance, which exacerbates these safety issues that have gone on for decades. Part of the issue is that there’s a general manager who effectively works for the governor. You don’t see this when you look at, say, the BART out in California. The MBTA wouldn’t have some of these problems if the legislature would give us more money, but the general manager would never say that. He doesn’t say, “We’re transferring this money [from operating to capital], and therefore we’re endangering our ability to maintain our system, and we’re gonna be accelerating some issues.” He says, “We’re gonna get the job done.”

Bostonia: What are some findings from the FTA’s report that resonated?

Fairchild: [That] a lot of the T’s problem comes down to staffing issues. Even their HR is understaffed. They’ve retired a whole bunch of train and bus operators, and there’s not an effective mentorship system in place. And when you don’t have mentors, and you also don’t have good written protocol—I don’t want to say it’s the blind leading the blind, but it is, in some ways.

Fairchild: One reason for that is that the MBTA is a substance-free work environment [that performs drug tests, meaning operators wouldn’t be able to use marijuana at home]. Even though marijuana is now legal in Massachusetts, it’s still not allowed for operators. You don’t have that issue if you’re delivering for Amazon. Another issue is that they have a seniority system, which means that new drivers coming in make less money in the beginning, and only work around 30 hours a week. It’s almost a hazing thing, where those with the most seniority get to choose their shifts and which routes they want to drive. There are a lot of jobs where you can get treated a lot better right off the bat and get paid more right off the bat. So, there are a lot of structural issues with the way that they hire.

Bostonia: What happened in Washington, D.C., after the FTA issued a similar report? Did the conditions improve?

Fairchild: In the case of D.C., I don’t want to say it hasn’t worked out well from a service standpoint, but ultimately they had to cut the number of trains they run per hour and the frequency of their service—so that has been bad. They ended up having a mechanical issue on an entire fleet, and people had to wait 20 minutes between trains in some cases… The FTA’s oversight is helpful in pointing out the issues that we’ve all been concerned about, on the watchdog side and the advocate side, but their mission is not to help our region continue to grow and accelerate and thrive. Their sole mission is on the safety side; nobody’s gonna say that’s not important—it’s vital. But we have to figure out how to do both.

Bostonia: So, are we going to see more safety-related shutdowns, similar to the Orange Line, as a result of this report?

Fairchild: In some ways, but I think there were a lot of factors that made this happen when it happened. I think the MBTA knew that some of the strictures [outlined in the FTA report] were going to come, and so they probably were like, “Here’s an avenue to do something that makes us look proactive,” as far as getting ahead of some of the FDA directives. I think that they may be doing something similar with the Red Line as far as saying, “We need to be doing some drastic things to make up for a lot of deferred maintenance.” It’s not something that we encourage to happen again, but just reading the tea leaves here, I think that there is going to be an analogous shutdown on the Red Line in the future.

Bostonia: TransitMatters released a pretty strongly worded media statement when the Orange Line shut down last month. What could have been done differently?

Fairchild: One of the things that TransitMatters has said is: how about, instead of shutting the whole thing down, maybe close down after the evening rush, at 8:30 or 9 pm, and then open it up at 6 instead of 4 am? Then, you use the shuttle buses on the shoulder hours—that would be a lot less expensive, and if you did that for an extended period of time, you probably could get way more done.

Fairchild: We were founded with the idea that there wasn’t a lot of legibility, or vocabulary, within the public, the media, or elected officials to talk about what the T needs at a technical level. If the media doesn’t report technically on a transit agency, then you don’t have pressure coming from the public to say the right things or to ask politicians the right questions, because the only information is coming from the T itself. We work with transit agencies, publish white papers, educate elected [officials] on issues, and we have train trackers and slow zone trackers for the public to look at. All of that creates literacy around the issue. We also have members of TransitMatters and contacts inside of Keolis and the MBTA, so we’re able to find out what’s happening internally. We’re trying to get people to say, “This is what we want” rather than “This is what annoys me.” Essentially, we’re trying to be proactive, rather than reactive.

Bostonia: Have you noticed any change in people’s understanding?

Fairchild: We were incorporated in 2014 and, since then, what I’ve been gratified to see is a lot more literacy within the media. Same with elected officials; if you just look at the lieutenant governor election, you have [Salem Mayor] Kim Driscoll and [state Senator] Eric Lesser, both of whom advocate for some really important transit issues that weren’t really being discussed five to seven years ago. They’re saying this because their advisors and their public are saying, “Here’s some things that you should be reading or thinking about in transit.” So, it really feels like there’s an impact there. When that’s happening and the media is recording it, you create this ecosystem where the expectations are raised.

Bostonia: Your mission also mentions that all of your work ultimately has equity in mind. Where does that come in?

The very idea that we would overlook a system that provides access to people who can’t afford alternative methods of transportation is egregious. When you allow public transportation to deteriorate, then the people who rely on it most are the people who are hurt the most, and unfortunately, a lot of those people can’t afford alternatives. This is not to say that we need public transit because the point of it should be to serve [only] disadvantaged people; it’s that it’s for everyone, and something like that needs to be an amazing system.

The MBTA Has Problems. This Alum’s Advocacy Group Has Answers

There is 1 comment on The MBTA Has Problems. This Alum’s Advocacy Group Has Answers

The MBTA Has Problems. This Alum’s Advocacy Group Has Answers
1
share this