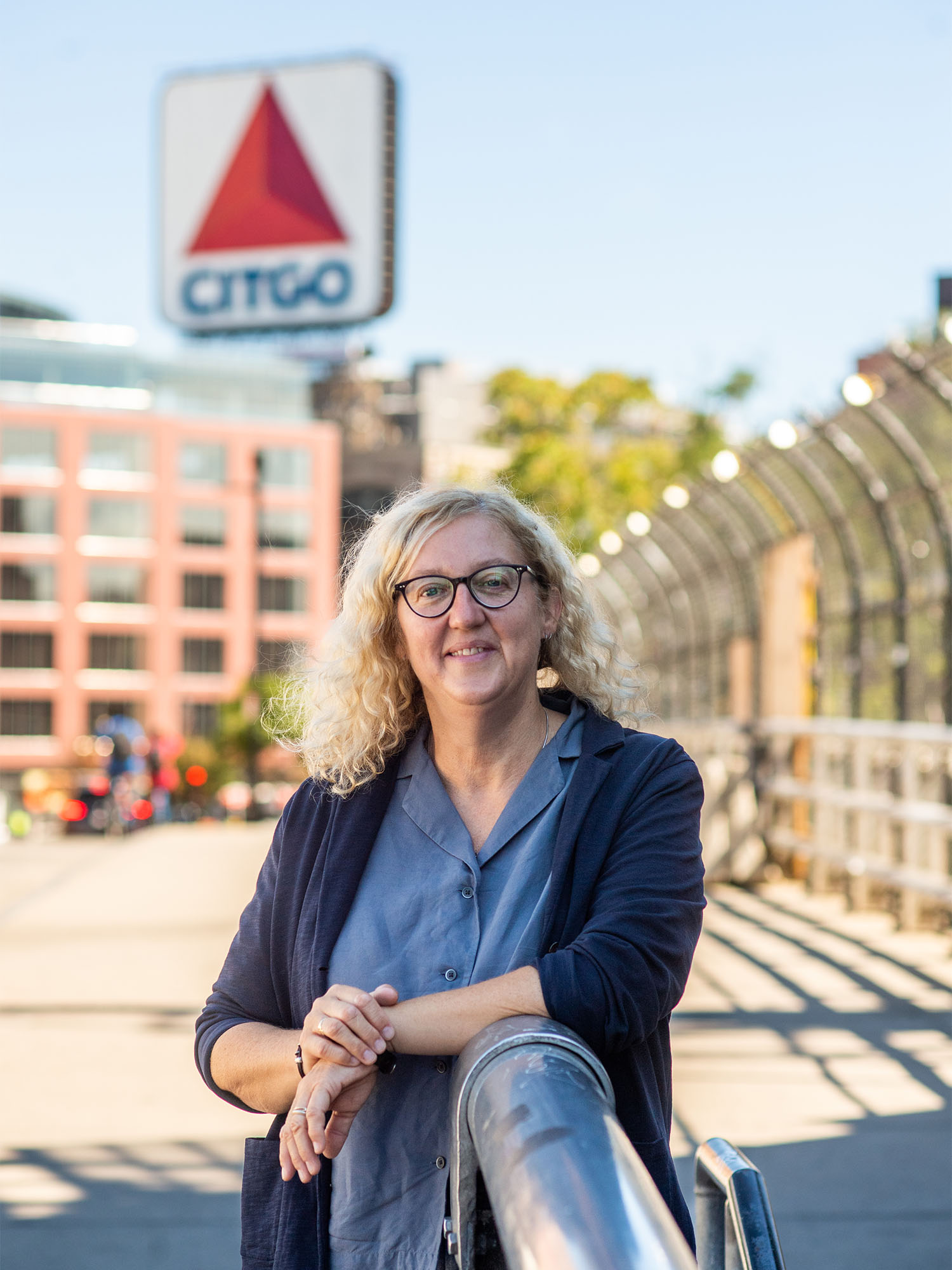 For New Initiative on Cities Leader, Urban Geography Is People

“Urban geography” may sound like it’s all about streets and parks and tall buildings. But for Loretta Lees, the new faculty director of Boston University’s Initiative on Cities (IoC), it means gentrification and homelessness, climate change and commuting, the way the built environment and the politics that shape it affect the lives of residents.

“The built landscape is obviously what you might call the wallpaper behind it, but the people that live in the city are the focus,” says Lees, a College of Arts & Sciences professor of sociology.

One thing she is especially interested in now is the idea of “the caring city, looking at what the city does to care for the people who live in it,” she says in her new office overlooking Bay State Road. “Lots of people talk about environmental sustainability, but less so about social stability. Enabling different groups of people with different incomes, different ethnicities, different ages. How they live in the city and how they’re cared for by the policymakers.”

Lees’ commitment to justice was inspired in part by her own experience of homelessness. She grew up in Manchester, England, but when her parents separated, she and her mother and two younger siblings had nowhere to live. They moved to her mother’s native Northern Ireland and spent a year at an aunt’s house in one of the poorer parts of Belfast, in the middle of the Troubles.

“That experience of basically sleeping on the floor for a year really helped when I was on the London Housing Panel dealing with temporary accommodations—that sense of not having the stability of a home,” she says. “It does impact you. You stop being in your own bubble. Academics can be very much in their own middle-class bubble, and if you’ve experienced stuff differently, it allows you to step outside that.”

For two years, Lees chaired the London Housing Panel, an initiative funded by the Mayor of London and the Trust for London charity to tap into different community groups for input on housing policy and practice in the city. She stepped down in March to take the BU post.

“My role as chair was to be independent. I had to be nonpartisan and nonpolitical, which can be tricky,” she says. She dealt with groups representing the elderly, the unhoused, LGBTQ+ residents, and many more, as well as local governments and housing officials.

“This past year we did a lot of work on temporary accommodations,” Lees says. “Of course there’s a tremendous housing crisis in London. Affordability is a massive issue. The collapse of council housing—what [Americans] call public housing, or projects—means there’s lots of people on waiting lists to get into public housing that will never get in.”

Soaring rents and property prices, lack of public housing (“social housing” in the UK), people evicted and made homeless because they can’t afford rising rents—all of these add up to a huge increase in demand for temporary housing, to the point that many people are being placed outside the city.

“Going back to the idea of the caring city,” she says, the Housing Panel held a series of roundtables with local governments, looking at how to deal with the situation and make it better for the people in temporary housing.

“If a family with two school-age children is put in a unit 10 miles from the school they were in, how are they going to get back to that school? Can they afford to travel back and forth? Can there be help in putting them into a different school? Can there be help in seeing they don’t get placed so far away? And the same for people who are working getting placed miles from where they work?”

Lees has long balanced that nonacademic work with her academic research and teaching. She had been a professor of human geography at the University of Leicester since 2013 before coming to Boston, and prior to that she spent 16 years at King’s College London, where she was a chair and director of the Cities Group. She earned a BA at Queen’s University, Belfast, and a PhD at the University of Edinburgh.

In 2017, she was recognized as the 17th most referenced author in urban geography worldwide, the only woman in the top 20. Her most recent book, Defensible Space on the Move (Wiley, 2022), examines the policy mobility of urban housing redesign that purports to inhibit criminal behavior from the United States to the United Kingdom. She published two papers last year on the effects of Airbnbs on cities.

The Initiative on Cities describes itself “as a hub for urban related research and teaching across the University, engaging urban leaders, policymakers, academics, and students from around the world to work toward sustainable, just, and inclusive urban transformation.” Its best-known efforts include the annual Menino Survey of Mayors and its City Leadership Summits. As faculty director, Lees will work with IoC codirector Katharine Lusk.

As a global urbanist, Lees brings a wealth of new collaborations and perspectives to BU, Lusk says: “We’re excited to build out more global research partnerships, bringing BU’s talent together with her international network.”

Regarding Boston, Lees is quick to note both its strengths and its challenges, with public transportation prominent among the latter.

“Boston is this hotbed of talent and technology, and it’s got an insane amount of universities in a very small space,” she says. “What does that mean for the future of Boston? In terms of tapping into that technology development and talent, Boston’s way ahead. But if you don’t have the wider infrastructure, some of those people will leave or won’t be able to afford to live here or won’t want to commute. Particularly since COVID, people realize how horrendous commuting is, but they don’t want to be working at home all the time either.

“There are complex questions for Boston, but I think this new mayor is spot on,” Lees says of Michelle Wu. “She looks like she has a real grasp.” She has already participated in a couple of Zoom discussions about rent stabilization with Wu’s staff, and she plans to continue to be involved in public policy discussions alongside her academic work. The IoC post is perfect for her, she says, because she can do both.

Still, a transatlantic move is complicated. Lees has one daughter in college in the UK; her younger daughter is starting her last year of high school there and will stay with Lees’ sister until she graduates. Lees’ partner is a native New Yorker and has been going back and forth between the two countries.

For the time being, Lees has moved into a new apartment building in the Fenway. “In London I live in an old Victorian terraced house. I’ve never lived in anything new built, and so out of pure curiosity, I wanted to live in a completely new building, and I wanted to be right in the middle of the busyness, but also be able to walk to work.”

The COVID lockdown had an unexpected effect for her as an urban geographer. “All I did was walk, walk, walk all over London,” she says. “It was really interesting to recognize that I’d lived in the same neighborhood for 20 years and there were whole parts of it I’d never been to. Even if it was a tiny little bit of it under a particular bridge or whatever. But it gets you thinking about how much of a city you miss if you’re not just wandering around.”

During the pandemic, she started running, too, at night, down old rail lines with a “head torch”—that’s a headlamp in Boston—and ended up featured on a BBC news report about different ways people were dealing with lockdown. (A minor injury has interrupted her running temporarily.)

“That’s all been very interesting, bringing me back to when I was younger and actually exploring cities,” she says. “I will be exploring here in Boston on foot and being quite nosy about different bits of the city that perhaps people never go into.”

For New Initiative on Cities Leader, Urban Geography Is People

For New Initiative on Cities Leader, Urban Geography Is People
0
share this