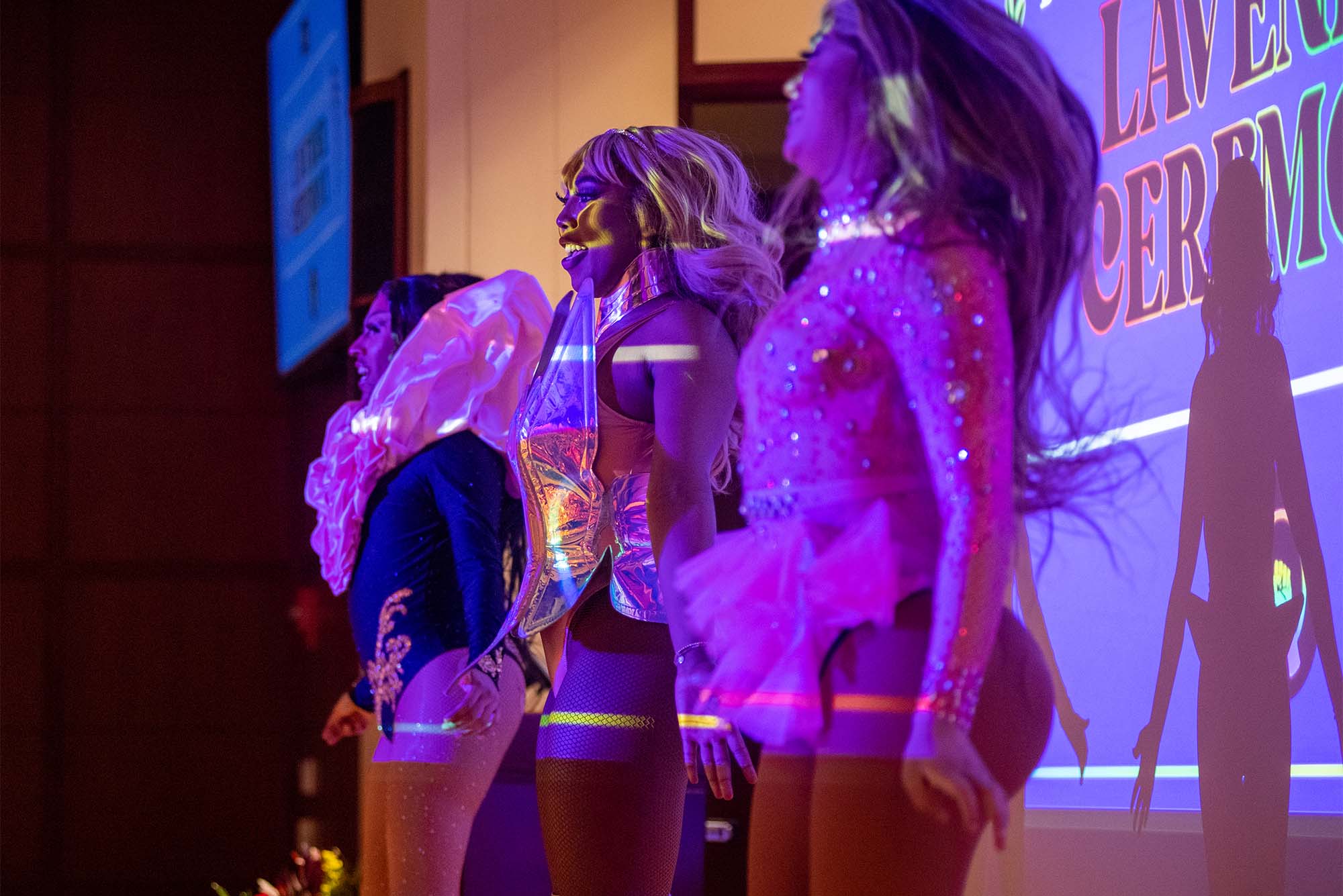 The Lavender Ceremony kicked off with a drag performance by Linda Marie Póssa (who also served as the event emcee), Candace Persuasian, and Chanel the Angel, who pulled graduates up on stage to dance to songs like the Pussycat Dolls’ “When I Grow Up” and Beyoncé’s “End of Time.”

BU’s first-ever Lavender Ceremony was both a cultural celebration and a commemoration of the University’s LGBTQ+ graduating seniors. Organized by the Queer Activist Collective (known as Q) and the LGBTQIA+ Faculty & Staff Community Network, Saturday night’s reception included inspiring speeches, a reading of the graduates’ names, and two raucous drag performances.

Created in 1995 by Ronnie Sanlo, a lesbian who was barred from her children’s graduations because of her sexual orientation, lavender ceremonies are now held annually at more than 200 college campuses nationwide as a way to support LGBTQ+ students. BU’s inaugural event drew more than 175 students, faculty, staff, and family members, many donning rainbow masks.

“I hope that this year sets a precedent for future generations of queer students at BU to make noise, to feel empowered, to create their own queer affinity spaces, and to advocate for change within their academic programs, so that LGBTQ+ voices are not only acknowledged but centered,” event cochair Evan Gilbert (CAS’22) said in his opening remarks. “We overcame tremendous obstacles to be where we are right now, and we deserve to take space and celebrate this momentous occasion together.”

“The plethora of knowledge and resources I gained at Q events, in particular, helped me take active steps towards queer joy, love, and euphoria,” student cochair Evan Gilbert (CAS’22) said.

The color lavender has a compelling backstory, dating back to two persecuted groups in Nazi-era Germany: gay men, who were forced to wear a pink triangle in concentration camps, and lesbians, who were assigned a black triangle marking them as political prisoners. LGBTQ+ activists combined the two colors to create a new symbol representing pride and community, according to the Human Rights Campaign.

Gilbert said he was determined to hold a lavender ceremony for the Class of 2022 after reflecting on how hard Q had worked to continue student programming through the pandemic. This summer he began working closely with Cristian Morales (ENG’16,’22), ARROWS (Advance, Recruit, Retain, and Organize Women in STEM) program administrator, who had originally raised the idea of holding a lavender ceremony. Efforts to launch one stalled during the pandemic, when many events had to be held virtually.

The evening kicked off with a drag performance by Linda Marie Póssa (who also was the event emcee), Candace Persuasian, and Chanel the Angel, who pulled graduates up on stage to dance to songs like the Pussycat Dolls’ “When I Grow Up” and Beyoncé’s “End of Time.” Midway through the ceremony, Póssa read the graduates’ names as they stood while attendees applauded them.

“I want to acknowledge that we would not be where we are today without the generations of queer and trans activists who dedicated their time and often their safety to the cause of queer liberation,” said Christa Rose (CAS’22), Q’s president.

“I genuinely arrived at FYSOP believing I was a cishet girl whose future included attending frat parties—every part of that sentence turned out to be false,” Gilbert said to laughter and cheers. He quickly received a crash course on queer culture, but at the same time “struggled with imposter syndrome, gender dysphoria, and experienced an all-out identity crisis my sophomore year… I would not have made it through that bleak time without my community here,” he said. “The plethora of knowledge and resources I gained at Q events, in particular, helped me take active steps towards queer joy, love, and euphoria.”

In an impassioned speech, Rose listed some of Q’s achievements over the last four years: a successful petition that persuaded BU housing to change its policy and allow incoming first-year students to live in gender-neutral housing, the founding of the Transgender and Gender Non-Conforming (TGNC) Advocacy Committee, educating faculty on how to make their classrooms a safer and more inclusive environment, June’s annual BU pride celebration, and a collaboration with the LGBTQIA+ Faculty & Staff Community Network to help students find mentors.

“I want to acknowledge that we would not be where we are today without the generations of queer and trans activists who dedicated their time and often their safety to the cause of queer liberation,” Rose said, specifically mentioning the protestors over several decades: at the Stonewall Riots, the Gay Liberation Front, the Gay Latino Alliance, the Lesbian Avengers, and the Combahee River Collective.

Chantel James, a Human Resources program manager and chair of BU’s LGBTQIA+ Faculty & Staff Community Network, was cochair of Saturday’s event, and she compared the four-year journey of the 2022 graduating seniors to those of butterflies, who start their journeys as caterpillars. “As a butterfly expects, and has to, they must fly to their new lives and the world,” she said. “I hope you never forget who you are and how you got there, and if you ever feel lost, know that BU’s LGBTQ faculty and staff will be there for you.” The crowd also listened to recorded remarks from Vincent Stephens, CAS associate dean for diversity and inclusion.

After the ceremony, Ryan Griffin (CAS’22) said that being a member of the queer community is an important part of his identity and that Saturday night’s ceremony was a way to connect BU to history and the national community. “It’s important that I get to celebrate with the people I’ve made my home with and celebrate our collective accomplishments as a community,” Griffin said.

Amanda Geist (CAS’22) said they attended the ceremony “to feel seen and celebrate the journey of who I am and who got me here,” pointing to Becks Loo (CAS’22), who helped Geist come to terms with their identity. In the fall, Geist will enroll in a graduate program in human rights at Columbia.

Loo, who is trans and has a job lined up as an administrator for the Transgender Emergency Fund, said he is grateful for the Queer Activist Collective’s community and help during these formative years. “BU isn’t perfect, but I’m grateful I found places to transition and grow,” he said.

Editor’s note: After this story was published we learned that the School of Theology held a lavender ceremony for its graduates in 2019.