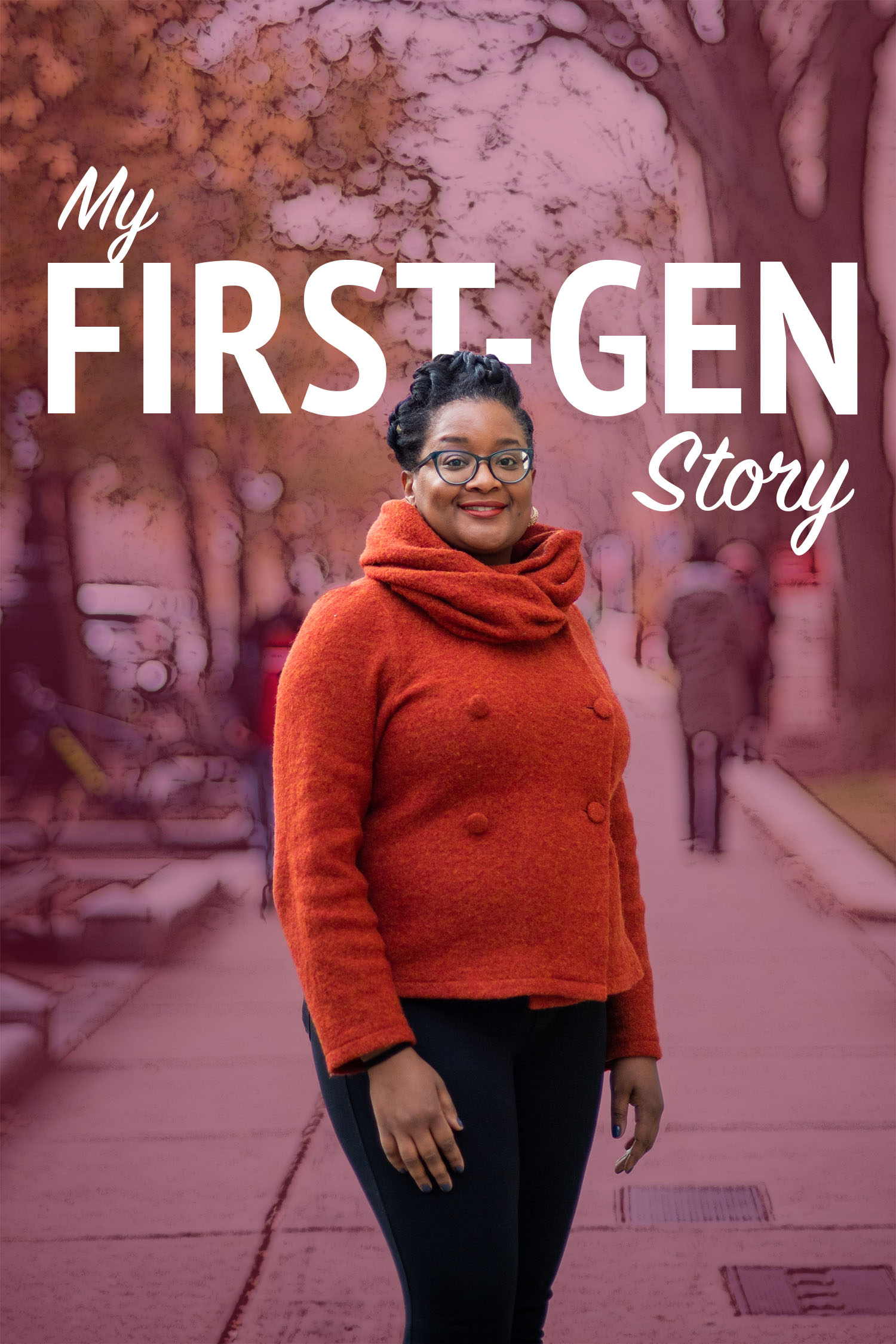 Her professional society, her sorority, and a supportive postdoc mentor helped her stick to her plan to become a professor of chemistry

In our occasional series My First-Gen Story, students, faculty, staff, and alumni share, in their own words, what it’s like to be a first-generation college student. In our latest installment, we hear from Malika Jeffries-EL, a College of Arts & Sciences associate professor of chemistry and Graduate School of Arts & Sciences associate dean. She also has a joint appointment in the College of Engineering.

My father urged us all to go to college, but he was very honest. He said, “There’s no money in this house for college.” I am the 10th of 14 children. My mother had three children and my father had children from two previous marriages. By the time I was going to college, I had seven siblings who were college age. So it was like, you’d better either be smart enough or play basketball well enough for someone to give you a scholarship.

I grew up in Brooklyn—in Brownsville, in the ’90s—and I wanted up and out of the hood. I always knew I was smart. I grasped things very quickly. Neither of my parents went to college. My mother was a seamstress, my father was in real estate, in property management. He coached a neighborhood basketball league on the side, and he knew that was a pathway to college. I played viola in the all-city orchestra and I played basketball. I was trying to cover all the bases. Some of the basketball coaches said, ‘You’re a good basketball player, but you’re smart. You could get an academic scholarship.’

My mother nurtured my academic side. She stuck me into every academic program she could find. She’d drop me off at the library—it had a children’s reading room—with a sandwich. At one point I was trying to read my way through the entire Encyclopedia Britannica. I was always that inquisitive kid. When I was around 12, I did an advanced science program for girls, and that was when I first heard about chemistry. They gave us a periodic table and I went home with it, and I was like, I’m going to be a chemist.

I went to Brooklyn Technical High School, which is an exam school. That was a big pivot point. It was study, study, study. I was also working at Au Bon Pain, about 20 hours a week during the [school] year and 45 to 50 hours a week in the summer. I told my mother, “Here’s what’s going to happen. I’m going to get a college degree. I’m going to get a great job. And I’m coming back and we’re leaving here.”

Wellesley embodied what I thought college was—grassy knolls and reading books on the grass in a little sweatshirt and buildings covered in ivy and just having these high-level intellectual discussions. I got an amazing scholarship from the school. There were a lot of wealthy kids. When you come into a space like this as a low-income student, you think, okay, maybe I’ll blend. You get a couple of the right accessories—a nice bag, a nice jacket. You play the part, and you’re still paying it off years from now on your Visa. I started going down that path and then I said, this is not sustainable.

But I quickly found my people. Academically, I felt pretty good, but I had to work on my study habits. My organic chemistry professor, Jean Fuller-Stanley, pulled me aside and said, ‘You’re really bright, but I’m going to need you to put in a little more effort.’ She was like my academic mother. She holds me accountable to this day.

My father wanted a doctor in the family. So I thought, okay, I’ve got to go to medical school, even though my first love was chemistry and I had no interest in med school. I went to Jean Fuller-Stanley with an existential crisis. We were doing dissections in biology. I said, “I don’t want to do this. I’m ruined.” And she said, “I never understood why you were premed. Why don’t you just stay with chemistry and you can be a PhD in chemistry.’ And she’s like, “PhDs also go by doctor.”

I was a sophomore when my mother died. She was only 42. She had a blood clot that was totally misdiagnosed—and then it moved. That was rough. I didn’t take time off from school because I thought if I stopped, I might never start again. It was very hard. My grades took a dip.

I got into Texas A&M and the University of Michigan for graduate school, but I couldn’t get my brain around going that far from family. So I went to George Washington University. I had family in D.C., including my sister Jameelah, who I was closest to in age. The family support helped, but it got to be challenging because she was diagnosed with cancer while I was in graduate school. We persevered, and thankfully, she pulled through.

The third year in my program I was upstairs teaching when someone came in and stole my backpack. Another graduate student had left the door to the lab unlocked. They drained my bank account, stole all my money—it was probably about $1,500—and my identity and ruined my credit. I relied on credit. My sister scraped together some money to help me. She said, “We’ll get through this.” I started thinking about leaving GW, but other people convinced me not to.

I was dealing with a lot. My mentor and I didn’t have a good relationship. He was a new professor and he didn’t really have experience mentoring students. And I’m certainly headstrong. He never said anything nice about my work. He told me I wasn’t cut out to do PhD work, and he kept me from publishing. He eventually apologized after I’d started my postdoc, and we’re good now.

As a first-gen person, one of the things I learned about is the importance of networking. I lost sight of that a little bit in graduate school because I was so busy doing the work. It’s so important—not just with professors and students in your program, but with other students, so you get different perspectives and have people to sustain you.

The last year of my graduate program at GW, I got really involved with my professional society—the American Chemical Society—and that changed my life. I got a travel grant to go to their annual conference, in San Francisco. It was the first time I ever got to go to a conference. I met a bunch of people who were doing great things. As a first-gen student, often you don’t know what you don’t know. I didn’t know the importance of professional organizations or the variety of career options that existed. I met people who worked in industry, in government. These women just had it going on, and I was just like, wait a minute, I need to affiliate with this group.

I sat down at a table with some older women, and they’re like, “Well, who are you, what are you getting your degree in, and what are you going to do next?” And I’m like, “Well, I don’t know.” And they said, “Well, there are a lot of options. You should go to this workshop and there’s this webinar and that seminar.”

I’m also in a sorority—Alpha Kappa Alpha. Kamala Harris is in that sorority. I joined when I was at Wellesley. I got paired up with an older member who was a chemist, Dorothy Phillips, who worked in Boston. And then when I was at my first American Chemical Society conference, I ran into her again. When you’re young, you don’t always realize that if somebody puts an older person in your life, figure out what they know. She helped me get on a committee so I could get money to keep coming to the meeting every year.

I met so many wonderful people at that first conference, and it was at a time when I was getting drained emotionally at my home institution. My professional organization is my village. They nurtured and supported me. They said, “You’re so close, just finish at GW, and move on.” And so I did what they said: I finished and I moved on.

I was really lucky because I had a good postdoc experience at Carnegie Mellon University. My mentor, Rick McCullough—he’s now president of Florida State University—was amazing. He revitalized me after what had happened at GW. My professors at Wellesley had convinced me that I should get my PhD and be a professor. I had a great experience at Wellesley, but after being at GW, I was like, I don’t know about this professor thing. I just thought academia was so toxic. But being at Carnegie Mellon, I thought maybe being a professor could be okay, as long as I don’t go to a toxic place.

BU is massive, it’s easy for students to get lost here. When I was teaching, I’d tell my first-gen students, “I’m first-gen; if you have questions, if you need help, come to my office.” One of my messages is: when you get up the next rung, look around and help the next person. My mother bred that into me. She said, “Sometimes you need the help, and sometimes you are the help.”

If you have a student, faculty, or staff member to suggest we talk to, email Sara Rimer at srimer@bu.edu.

There are 8 comments on My First-Gen Story: Malika Jeffries-EL