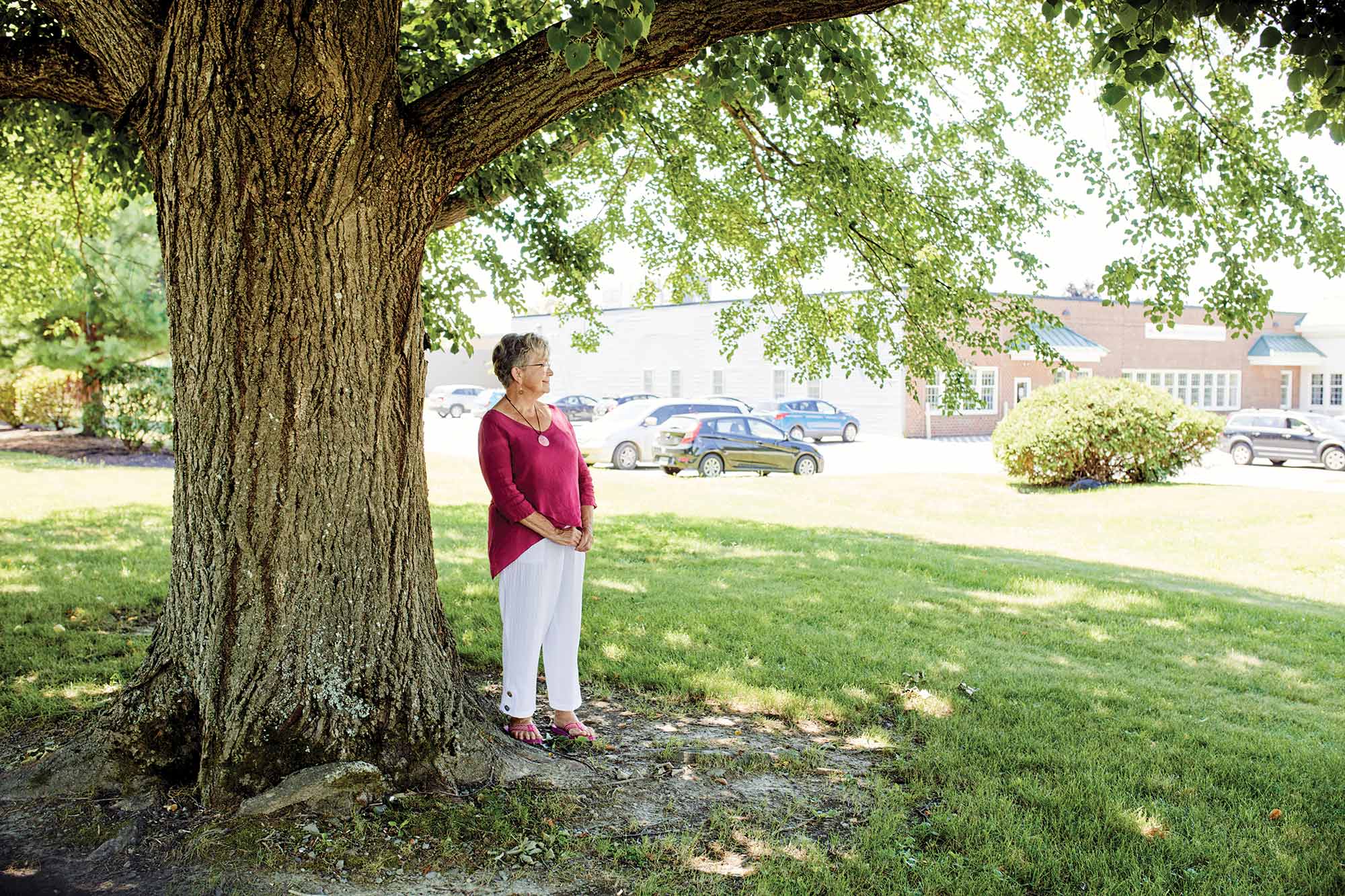 Brooks has overseen OHI, a nonprofit that provides housing and services to people with intellectual disabilities, autism, and mental illness, for 41 years. Photo by Michael D. Wilson

Bonnie-Jean Brooks is not easily intimidated. When faced with a difficult task—whether it’s wrangling money from the Maine state legislature or preventing a COVID outbreak in the group homes she operates—she dives in with her personal and professional motto “Everything is possible.”

“There is so much that human beings can do and can discover about themselves. The limits of human potential are boundless,” says Brooks (Sargent’63), president and chief executive officer at OHI, a nonprofit providing housing and services to people with intellectual disabilities, autism, and mental illness in Down East and northern Maine.

With a blend of optimism and pragmatism, Brooks has led OHI for its entire 41-year history. The organization was created in 1979, when Maine began transitioning people with intellectual disabilities and mental illness out of large institutions and into community-based care. The new nonprofit—known then as Opportunity Housing, Inc.—planned to open two 6-person group homes for people then widely believed to be dangerous and incapable of being deinstitutionalized.

Brooks, who had years of prior experience directing physical education programs in schools and treatment centers, has since grown OHI into an organization serving more than 600 people a year across six counties—operating 32 group homes and a range of rehabilitation and support programs. The organization’s work has transformed the lives of many, including a woman Brooks first encountered sedated and restrained in a psychiatric hospital who later married, owned a home, and held a job in her community.

A native of tiny Stockton Springs, Brooks left Maine for the first time to study physical education at Sargent. “The day my mother took me to college and dropped me off on the sidewalk of Charlesgate Hall was quite an awakening,” she says.

When guidance counselors suggested Sargent’s science courses might be too difficult and recommended a transfer to the College of Basic Studies, Brooks refused. “I said, ‘No, no, I’m going to stick it out at Sargent. If I don’t make it, I’ll go home.’” She went on to become the first person in her family to earn a college degree.

After graduation, Brooks worked briefly in Maine teaching biology, health sciences, and physical education at rural Winslow High School, where she also coached soccer, basketball, field hockey, swimming, cheerleading, gymnastics, and lacrosse. In 1965, she and her then-husband boarded a Greyhound bus for a move to California. Brooks decided to look for a teaching job there and met with the physical education supervisor for Los Angeles’ public schools.

The only available positions were in South Central L.A., a neighborhood still reeling from the recent Watts Rebellion. Brooks accepted a job at Charles Drew Junior High School, which had more than 1,000 students. “On my first day, the cafeteria was burning,” she says. Undaunted, she stayed to teach and was soon promoted to department head and was then asked to pilot an elementary school physical education program. She loved working in L.A.’s elementary schools and organized hikes and camping trips in the Angeles National Forest for her students.

“The kids in Watts trusted me because I built a relationship with them,” she says. “I think the whole world is about relationships.”

Brooks and her young family moved frequently over the next decade, and she held jobs teaching and directing recreation programs in schools, daycares, and other facilities in New Jersey and Maine. When she accepted the leadership role at OHI, she felt it was important to “meet people on their ground,” so she moved into the Bangor Mental Health Institute (now the Dorothea Dix Psychiatric Center) to live alongside the people she’d soon be transitioning to group homes. Living in her apartment there allowed her to witness patients’ trauma firsthand: she saw people eating out of garbage cans and being hosed down after using the bathroom. “You can’t develop trust with a person until you can understand their trauma history,” she says.

You can’t develop trust with a person until you can understand their trauma history.

Under Brooks’ leadership, OHI has grown steadily in size and reputation, often taking over floundering programs from other agencies. Always willing to meet the needs of its communities, OHI agreed to take over a food pantry in Brewer, Maine, several years ago when local churches could no longer support it.

Because Medicaid payments make up the bulk of OHI’s budget, funding is always Brooks’ biggest challenge. She fills funding gaps by seeking grants and offering training programs to generate revenue—and by being as frugal as possible. Staffing is another challenge, as caring for people with multiple needs is hard work at relatively low pay. To boost retention, Brooks offers recognition, incentives, and flexibility. She also communicates directly with her more than 350 staff members as often as possible: “They need to know who’s at the helm. They need to know it’s someone who’s going to listen to them,” she says.

Communication has been especially important during the COVID-19 crisis. As Maine eased its restrictions this summer, Brooks urged her staff to remain vigilant about social distancing outside of work, reminding them of their important obligations to the vulnerable people they serve.

Brooks sees supporting people with disabilities as a duty and a privilege. Watching people grow and learn is inspiring, she says. “It enriches you, and strengthens you, and teaches you life lessons.” Despite many phone and Zoom calls, the social distancing required in recent months has caused devastating setbacks for OHI clients just beginning to build friendships and community ties. Brooks is heartbroken for them and anxious for the day when in-person progress can resume.

This article was originally published in Inside Sargent.