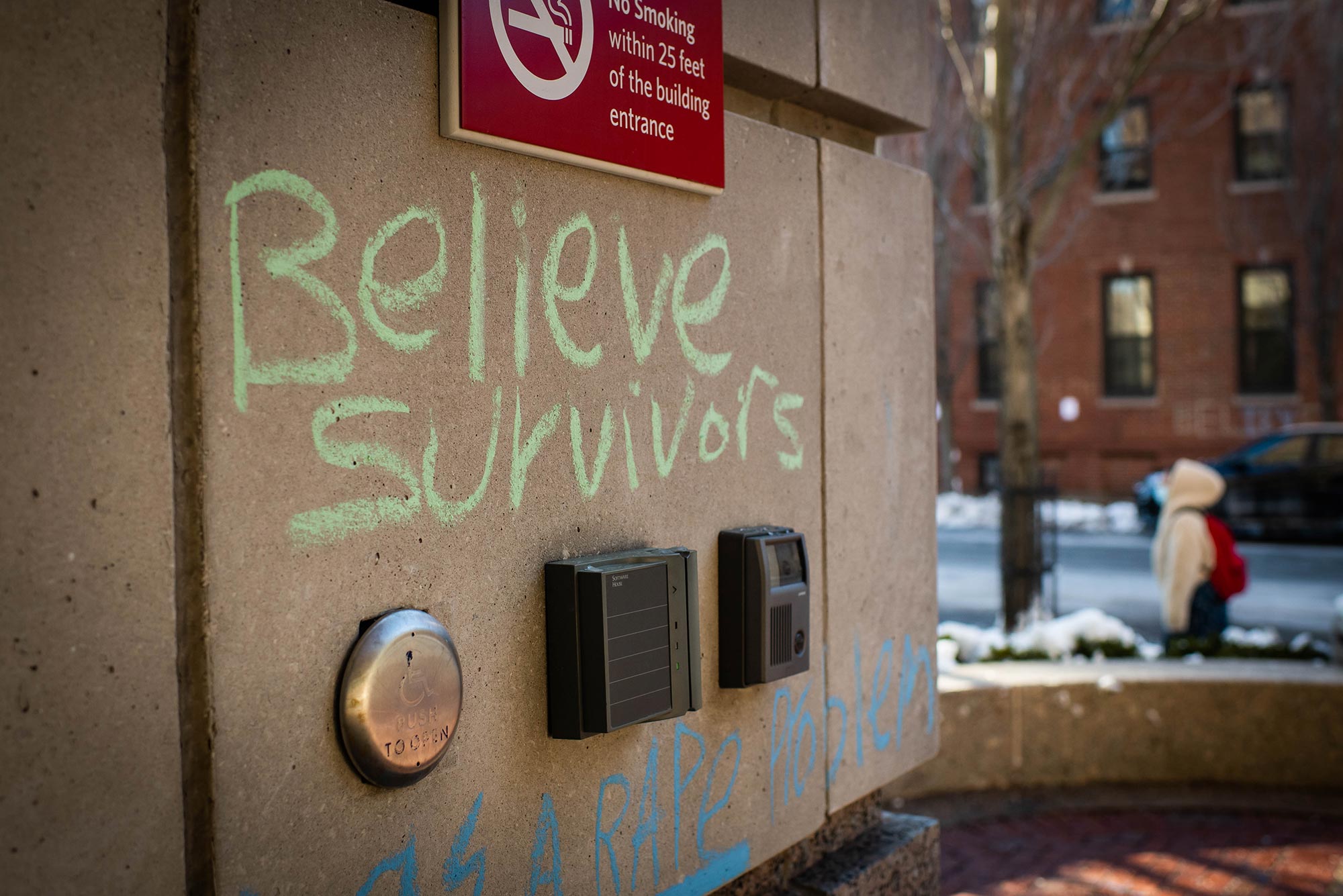 On Monday, buildings, statues, and sidewalks around the Charles River Campus were peppered with signs and messages, written in chalk, by protesting students.

Administration responds, says it’s prepared to investigate cases where there is “sufficient information”

Just as the Super Bowl was ending Sunday night, with snow falling across Boston, hundreds of BU students were gathering outdoors across campus—for a reason that had nothing to do with football. They came together for a protest, organized by the student group Campus Survivors, demanding the administration respond to students’ sexual assault accusations with more force and clarity, protesting how the University handles cases, and calling for more help for survivors of sexual assault.

The Daily Free Press reported that an estimated 600 students spread across campus carrying posters. And by Monday, their presence and actions could be seen all around the Charles River Campus, as buildings, statues, and sidewalks were peppered with signs and messages written in chalk, with statements like “BU is complicit” and “Our University has a sexual assault problem.”

“It was a very powerful night, having many BU students come together on Super Bowl Sunday, late at night in the middle of a snowstorm,” Savannah Majarwitz (CAS’22), cochair of Student Government’s Mental Health Committee (MHC), said Tuesday. “It says a lot about the resilience of the BU community, that there is overwhelming support for change. And it speaks volumes that BU still hasn’t said anything.”

That last point changed on Tuesday.

After the protest, students were incensed that they had not received any response from University administrators. They flooded the inboxes of President Robert A. Brown and other officials and took to social media to voice their anger.

On Tuesday afternoon, Brown started to send individual letters to the more than 280 students who emailed him. In his note, shared with BU Today, he stressed that the University finds any form of sexual assault or harassment “reprehensible” and that it strongly condemns this behavior. “Every case that is brought to our attention is fully investigated in accord with federal and state law and regulations, including Title IX, and our own established procedures,” he wrote, citing the BU Sexual Assault Response & Prevention Center (SARP) as a resource and the University’s mandatory web-based sexual misconduct prevention training. He thanked the students for sharing victims’ accounts by email, describing them as deeply disturbing.

“In those few cases where we are able to determine the likely identity of the alleged perpetrator, the University’s Title IX Coordinator or Dean of Students Office has initiated appropriate follow-up,” he said. “We are prepared to investigate any of the other cases, whether they involve faculty or other students, if the complainants or reporters provide us with sufficient information to do so.”

In addition to Brown, Kenneth Elmore (Wheelock’87), associate provost and dean of students, also wrote to the students, assuring them that their stories matter. “A word to all, especially the survivors in these stories: we are working to create a learning environment where students can decide the ways that work for them to bring criminal charges; to report these incidents for investigation to the University; and for individual, confidential care,” Elmore said.

The University has taken several recent steps to combat the issue. With the onset of the COVID-19 pandemic, it increased SARP’s telehealth offerings and adapted both BU’s bystander intervention training and graduate student training to be available online. It also joined the National Academies Action Collaborative, a group of 40-plus universities and research institutions, organized by the National Academies of Sciences, Engineering, and Medicine, that work to spotlight and eliminate sexual harassment in research labs, classrooms, and the administrative suite.

Last November, the University’s Equal Opportunity Office organized two listening sessions for the BU community about the school’s sexual misconduct policies. The second listening session specifically focused on a report, asked for by the provost and written by faculty members, containing concrete actions that the University could take to create a BU culture that is free from harassment. The BU community was asked for its feedback and the provost is now using these ideas to create evidence-based strategies to prevent sexual misconduct.

Sunday’s protest was organized by Prisha Sujin Kumar (CAS’22), cofounder of Campus Survivors, a group dedicated to supporting survivors of sexual assault and working to erase the stigma that many survivors feel in talking about being sexually assaulted. Sujin Kumar published her second open letter to University administrators last month, criticizing them for what she described as a lack of empathy and their “indifference” when punishing organizations with repeat accusations of assault and harassment.

Sujin Kumar says while her first open letter was in response to the outpouring of survivor stories, the second one was more out of anger. “I saw that there had been nothing done in the past six months, since various students had come forward with statements of their assaults, and I wanted to discuss how the problem actually got worse,” she says. “BU organizations were harboring predators and departments were protecting their own, and I had had enough. Feedback [from other students] both times was overwhelming.”

Both the University’s lack of response and the student feedback made her decide to form a list of five demands, which student groups and leaders then disseminated across social media channels as well as to administrators, calling for a public statement acknowledging sexual assault and sexual harassment at BU; implementing a zero-tolerance policy for all faculty; implementing a zero-tolerance policy for all student organizations; an anonymous reporting and strike system; and expanding resources for SARP. Sujin Kumar says these demands were designed to be tangible results that BU could enact quickly. More than 100 BU student groups and organizations have since joined the Campus Survivors movement.

A nationwide problem on college campuses

Sujin Kumar and three other BU students launched the Campus Survivors Instagram page last May. The page has become a virtual safe space for survivors from BU as well as other schools across the country (from Northeastern University to the University of Oklahoma to the University of Pittsburgh) to anonymously share their stories, many of them graphic in nature, and to feel supported. Since its start, 98 accounts of sexual assaults occurring at BU have been posted on the page. They range from a victim who says they were incapacitated at a party to one being sexually harassed by a professor. The page has since grown to more than 2,700 followers and 180 posts, and it also shares a list of resources, including organizations that can offer assistance and guidance on how to report the crime.

“What makes this problem not unique to BU is that campus rape is an epidemic on almost every college across the country,” Sujin Kumar says. According to the most recent Campus Climate Survey of Sexual Assault and Misconduct, published in 2019, one-third of BU students said they experienced some level of sexual harassment in school and one-third of undergraduate women reported some type of nonconsensual sexual contact. More than 20 percent of BU undergraduate women said they were victims of incidents involving physical force or the inability to consent to or stop what was happening.

While BU surveys its students about such matters, not all colleges have had a similar system in place. On January 12, Massachusetts Governor Charlie Baker signed a new bill requiring that local colleges send out a sexual misconduct climate survey to its students, asking questions about the prevalence of incidents on campus and finding out how familiar students are with school policies and resources.

Amarri Harrison (CAS’22) is one of the students who had shared anonymously her sexual assault experience (unwanted communication and touching from a professor) on the Campus Survivors page, but was willing to speak with BU Today about it and about subsequent dealings with Judicial Affairs. She says she is furious after the experience, and that her concerns were not heard. Still, she encourages others to report and share their stories, if they feel comfortable doing so. “If it’s something you want to say and want to get off your chest, you can do it without the fear of retaliation on the page,” she says.

Sujin Kumar describes Sunday’s protest as “unreal,” and says that students do not plan to stop until the administration takes accountability “for its failure to protect survivors and takes tangible, active steps to create a safer and healthier environment for its students. One single statement is not going to be the end of this, and we are preparing for sit-ins, phone banking, marches, and town halls.

“This is only the beginning.”