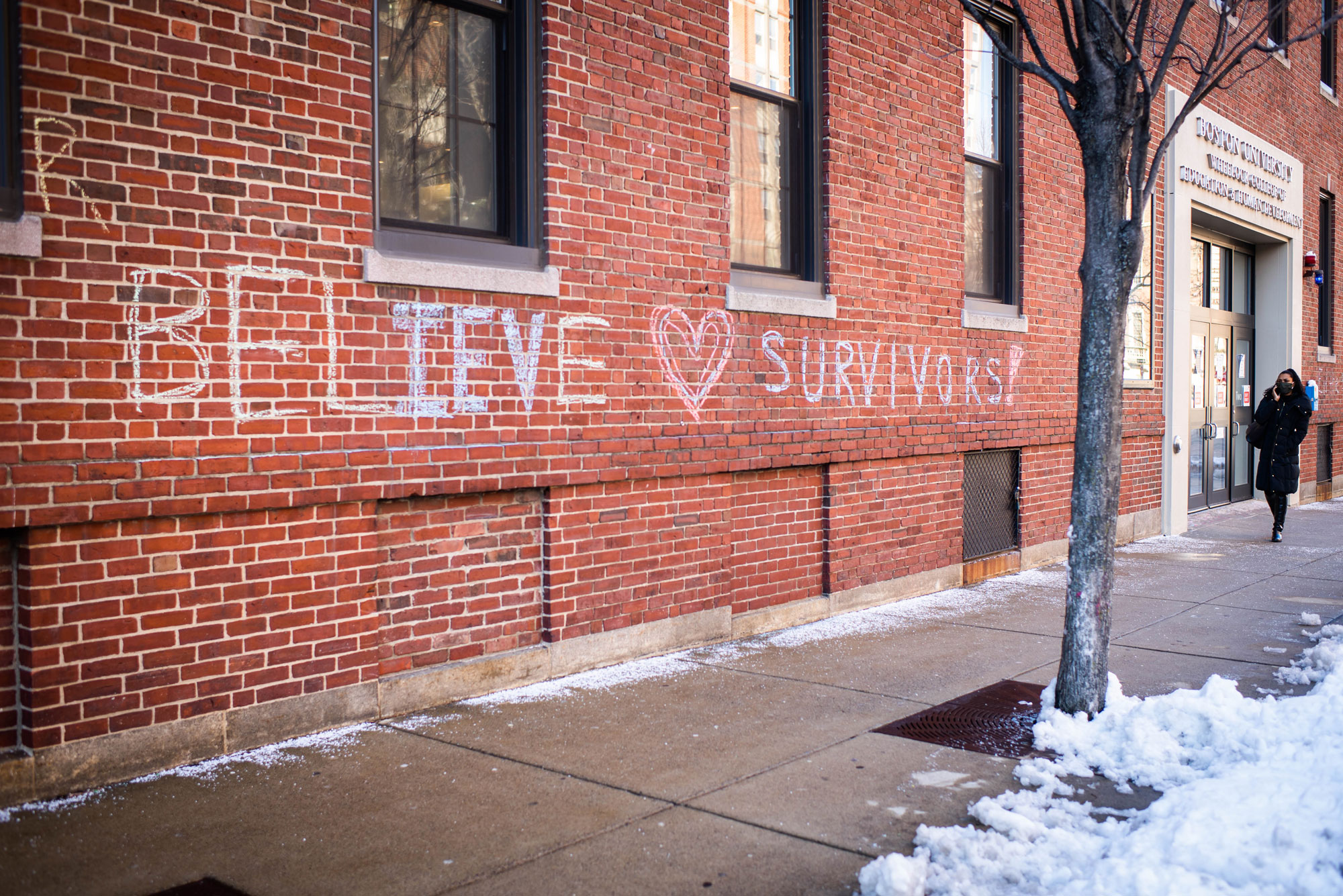 A protest earlier this month was held to raise awareness of campus sexual assaults and make five demands of the University administration. Hundreds of students marched and covered buildings, statues, and sidewalks with signs and messages like “BU is complicit” and “Our University has a sexual assault problem.”

Boston University students gathered virtually Tuesday night to discuss how the administration is handling sexual assault cases and what steps the campus community needs to take to better support survivors. Titled #BUHasAProblem, the event was organized and moderated by the College of Arts & Sciences Student Government, and it came two weeks after more than 600 students fanned out across the Charles River Campus, with posters and chalk, on February 7 to raise awareness of campus sexual assaults and make five demands of the administration.

Student organizers extended an invitation to President Robert A. Brown, Jean Morrison, University provost, and Kenneth Elmore (Wheelock’87), dean of students and associate provost, to attend Tuesday night’s event, but they declined. In an email sent to the organizers and posted to the CAS Student Government Instagram page prior to the event, Elmore said he hoped that the administration could arrange a meeting with leaders in the near future “to discuss the issues and your demands. We believe there are opportunities for us to work together to find solutions and address your concerns.”

“The goal of the town hall was to take notes and learn directly from the BU community what they would like to see improved at BU with regard to sexual harassment and sexual assault,” student organizers wrote after the event in answer to questions from BU Today. “Additionally, we wanted to have a more democratic process on how we can protest with survivors’ mental, physical, and emotional health put first.”

The 90-minute-long Zoom meeting was attended by about 70 students and a representative from the Sexual Assault Response & Prevention Center (SARP). Attendees could choose to remain anonymous or change their name, and the mood was subdued and respectful throughout.

At the protest earlier in the month, hundreds of students marched and covered buildings, statues, and sidewalks with signs and messages like “BU is complicit” and “Our University has a sexual assault problem.” That event was planned by Campus Survivors, a student group dedicated to supporting survivors of sexual assault and working to erase the stigma that many survivors feel in talking about being sexually assaulted. The Campus Survivors Instagram account anonymously posts students’ accounts of dealings with rape and sexual assault, with some of the students placing blame on the University for not doing more to support survivors. More than 100 BU student groups and organizations have since joined the Campus Survivors movement.

This past weekend, the Boston Globe interviewed organizers about the February 7 protest and its aftermath. The article talked about how the problem is prevalent on virtually every college campus across the country. According to the most recent Campus Climate Survey of Sexual Assault and Misconduct, published in 2019, one-third of BU students said they experienced some level of sexual harassment in school and one-third of undergraduate women reported some type of nonconsensual sexual contact. More than 20 percent of BU undergraduate women said they were victims of incidents involving physical force or the inability to consent to, or stop, what was happening. These findings are similar to numbers reported at other participating schools, the Globe said.

Tuesday’s event revisited the five demands students had previously sent the BU administration, which student groups and leaders have since disseminated across social media channels: a public statement acknowledging sexual assault and sexual harassment at BU; implementing a zero-tolerance policy for all faculty; implementing a zero-tolerance policy for all student organizations; an anonymous reporting and strike system; and expanding resources for SARP. The creator of the demands, Campus Survivors cofounder Prisha Sujin Kumar (CAS’22), had told BU Today previously that these demands were designed to be tangible results that BU could enact quickly.

At Tuesday’s event, ideas for further demands came up, including a possibly required class on sexual assault, increasing the CCTV storage around campus in case it is needed for evidence, and pushing for more diversity among members of Judicial Affairs.

#BUHasAProblem organizers had previously made it clear that if the administration does not make substantial changes and meet these demands, the movement will continue. They asked attendees for opinions on how to do this while at the same time ensuring that survivors’ mental, emotional, and physical health is the priority.

One recommendation was that protesters use more supportive language around campus rather than signage with triggering words. That comment was in reference to the signs and posters that appeared during the February 7 protest. At the Tuesday event, organizers promised to use less provocative language in future posters.

Some attending the virtual event said they feared that the University doesn’t take sexual assault accusations seriously enough, and they asked how students could work together to get the University and the Dean of Students office to do just that.

The second half of the event moved to an open-forum format, inviting more general comments and questions. One person mentioned the idea of doing a sit-in protest at some point. Another suggested the SARP newsletter as a resource for those looking for more information. A third suggested a formal investigation of any student or faculty member who receives a certain number of anonymous complaints.

The question was also raised about how a sexual assault accusation is handled for club sports and student organizations.

There are 2 comments on Students Gather Virtually to Share, Discuss How BU Handles Sexual Assault