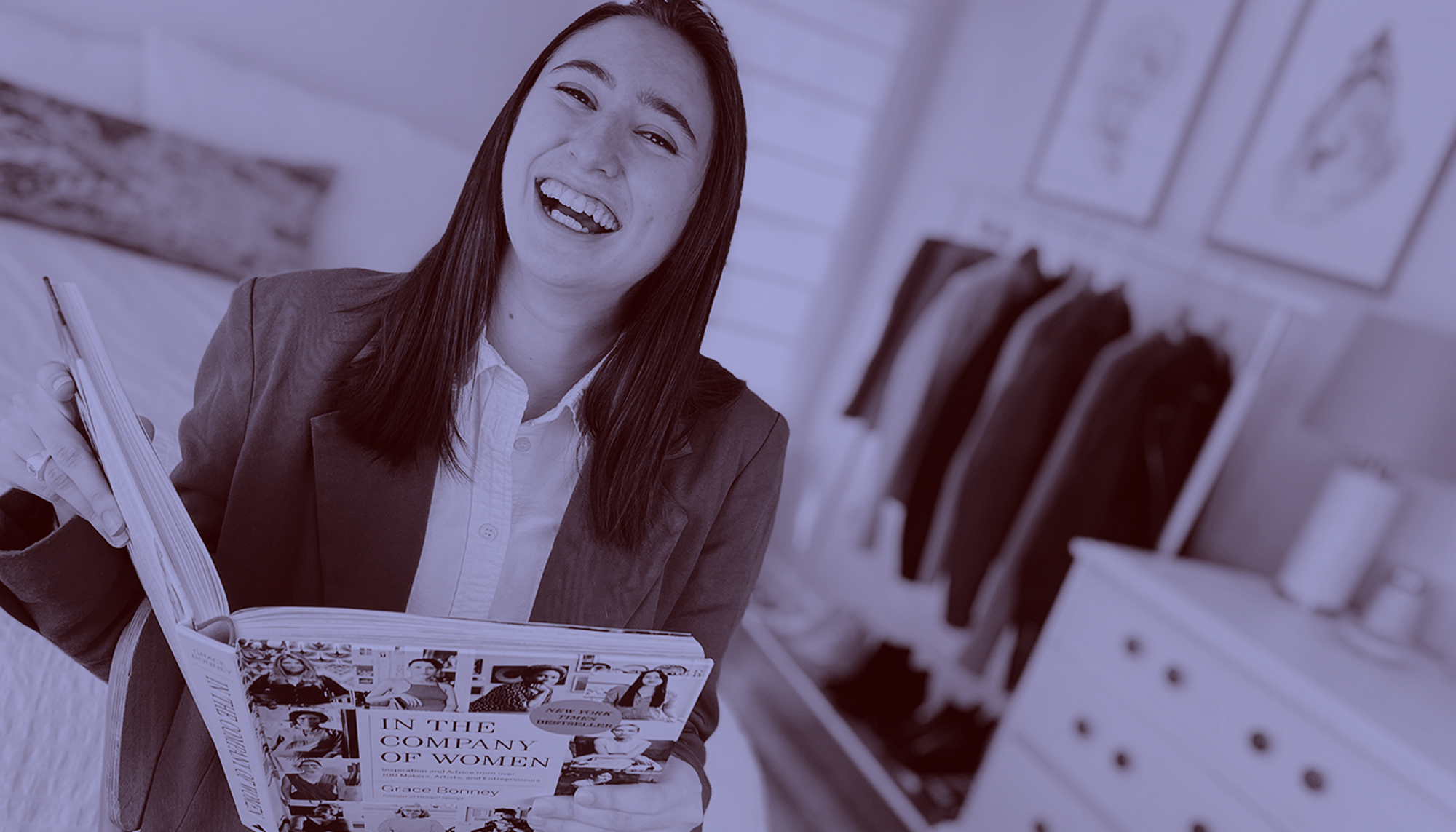 Suits with Pockets, and Now, a New Networking Community for Women

It’s an annoyance many women face as soon they get dressed: pockets that are often fake or so small they can barely hold a credit card. It annoyed Sarah Greisdorf so much that she came up with a solution.

Greisdorf (CAS’20) had no experience in the fashion industry; she was a computer science major at BU. But through University resources and programs like the BUild Lab, Innovate@BU’s summer accelerator, the BU Spark! fellowship program, and Spark’s Dolphin Tank + Demo Day, she fleshed out her idea of creating a woman’s suit with practical pockets. She named her company Holdette.

The work kept her busy during 2019, and the suit was nearing launch last year when it was halted, in large part by the coronavirus pandemic, which slowed down suppliers and the design prototype shop. Undaunted, Greisdorf came up with a plan B.

In April 2020, her Holdette team dreamed up Back Pocket, a virtual mentorship program for women in college and recently graduated. Today they are running workshops and starting local community groups. Topics up for discussion include updating your social media before applying for a job, building work relationships as well as friendships, and how to deal with disappointment if you don’t get a job you wanted.

The program took off, to the point that they have had more than 6,000 attendees at their workshops and close to 500 members in their Slack community; they have brought in execs from more than 25 companies to share career advice. Now, Greisdorf sees it as the company’s future. “We’ve had just such a positive reception to it that I think we are going to see where it goes,” she says. “We’re still trying to sell the suits, but we’re not really sure if we even want to produce apparel, because I just really feel like this community that we’re building for recent grads is where our team’s hearts lie.”

Greisdorf recently talked to Bostonia about how her business is shifting and what she enjoys most about working with other young women.

Bostonia: How did you get the idea for Holdette?

Sarah Greisdorf: I was taking a shower and thinking about my senior year in high school. That’s where I have all my best ideas. I realized that every time I left the house, I had to carry my phone, my keys, and my wallet in my hands, and none of my male friends had to do that since they had pockets. I decided I wanted to do something about it, and design women’s clothes that had pockets.

Did you have any previous jobs or experiences that influenced you as you started the company?

Two summers ago I worked for the city of Boston and helped to get the women’s employee resource group up and running, and I ran BostonHacks. I think it’s interesting we’re now focusing on community, because it has been a thread through all of these experiences I’ve had, way more than fashion ever was.

How hard was it to secure funding for Holdette?

We started a crowdfunding campaign that raised $28,500, $3,500 more than our goal. We did that in June 2020, and then later that summer we were one of the winners in the campus business plan competition, so that was another $12,000. Then we also entered a business accelerator, called Envision, for underrepresented founders. We got another $10,000 from them. So we have been really fortunate going through all of these programs.

We probably wouldn’t have started our community otherwise, because we couldn’t launch our product, everyone was going home, and everyone was lonely. We wanted to connect folks, and that’s how Back Pocket came about.

How many people are joining these virtual events?

It ranges from the low hundreds; our biggest event was last September and we had 3,500 RSVP. That was a networking event with speakers from Tesla, Facebook, and Google. We’ve been getting some pretty big names. We’re doing another “getting your first job postgraduation event” in April, and BuzzFeed and someone from the Ketchum agency are coming. I’ve been cold-DMing people on LinkedIn, explaining what we do and asking if they can come to speak. And so far people have been receptive.

These days, it’s when I see our community members realize that they have things in common or that they have these unique ways to support one another, I realize I helped bring them together.

I like watching people’s faces during our calls, when we talk about building relationships, for example. Someone says, “I’m sad because I’m always the first person to reach out with my friends,” and other people on the call say, “That’s what happens to me, too.’’ Having that recognition that you’re not alone, and the way that you’re interacting with people and navigating through this transition to adulthood, is bringing so many people peace at a time when everything feels up in the air.

What’s your advice for those looking to start their own business?

This pivot to community has taught me to think of a problem that exists. Finding this passion for community-building was the right thing for me to do, and I had to go on this whole suit journey to find it. But it helped me find the thing that I love to wake up and do.

Make sure you have that before you go commit that five years or whatever of your life to do something like this.

How many suits have you sold?

It’s funny, because although we’re putting [the suits] on the back burner, the reception has been so positive. People love the quality, say the pockets are perfect. They took so long to do because we did four iterations of it. It’s very satisfying because people who order one love it. And it’s so exciting to see people wear something that we created. We produced 180 suits and we’ve sold about half that.

Is there anything you would do differently?

You have to learn how to be a manager, which is totally different than being a leader. In college, I managed the BostonHacks team, which had 30 to 40 people on it, so I thought I knew how to do it, but then when I started to run [Holdette], I had no idea what I was doing. They’re different skills.

My Big Idea: Suits with Pockets, and Now, a New Networking Community for Women

My Big Idea: Suits with Pockets, and Now, a New Networking Community for Women
My Big Idea
0
share this