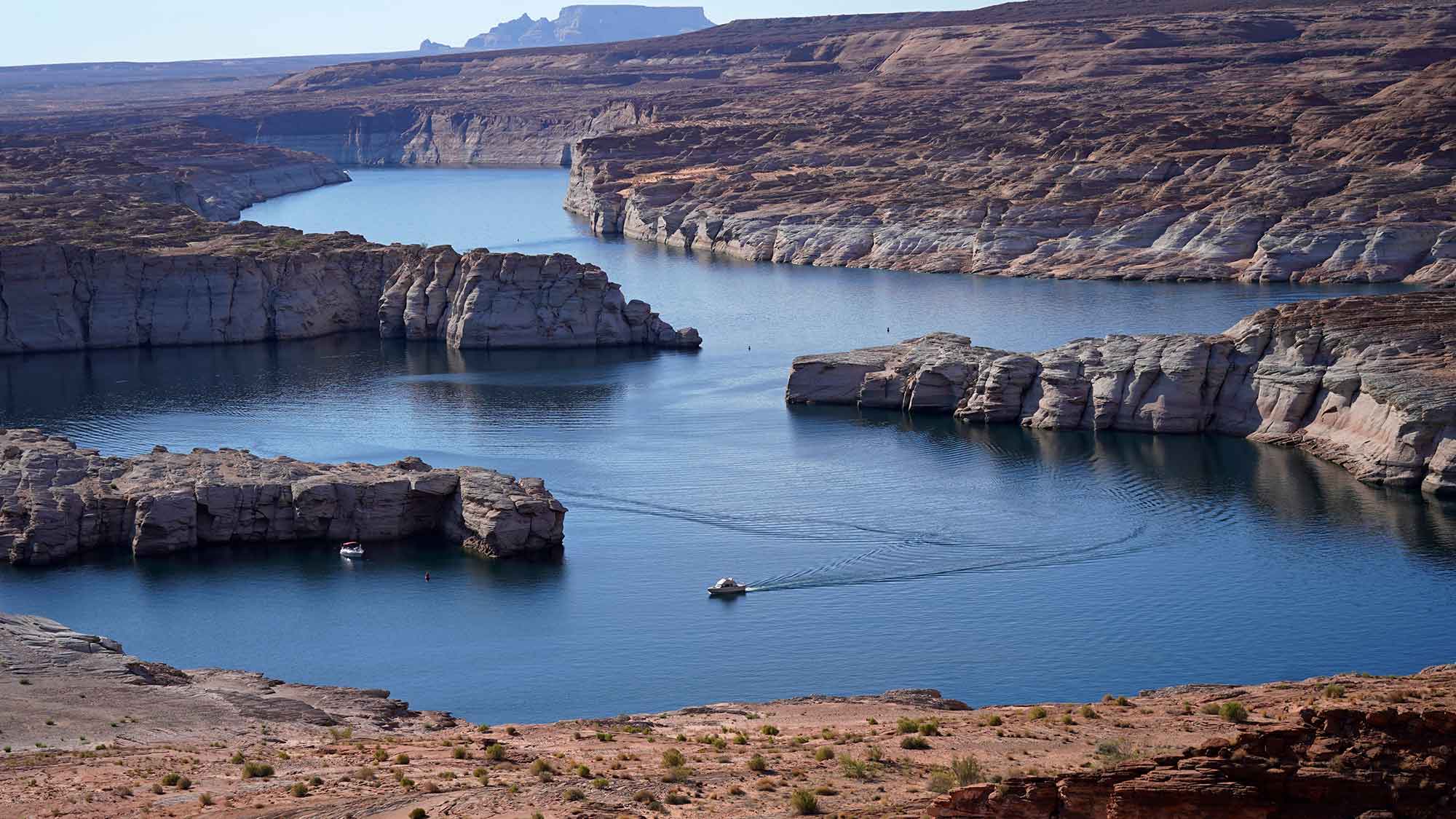 Water levels on Lake Powell near Page, Ariz., hit historic lows this summer from a climate change-fueled megadrought in the western United States. Other historic climate events, including wildfires and record-breaking temperatures, have been felt across the country this year. (AP Photo/Rick Bowmer)

“It is unequivocal…” begins the Sixth Assessment Report from the UN Intergovernmental Panel on Climate Change (IPCC). The report, released Monday, gives a stark outlook on the current state of Earth’s changing climate. The nearly 200 scientists who authored the report are clear about the fact that climate change is accelerating because of human activities and that we are without a doubt already experiencing widespread changes from rising global temperatures.

Just take this summer, for example: Massachusetts and eight other states experienced the hottest month of June on record, and regions around the United States and the world have seen a cascade of extreme weather events linked to climate change, including devastating wildfires, droughts, and flooding.

“This report unequivocally states that it doesn’t matter where you live on Earth, climate change is going to impact everyone,” says Abigail Sullivan, a BU College of Arts & Sciences assistant professor of earth and environment, who studies how ordinary people can do their part to help avoid the worst effects of the changing climate.

Although the climate crisis will impact everyone, it will affect different places in different ways. For the first time in the IPCC’s 33-year history, scientists broke down their findings by region to examine projections with an interactive world atlas that shows heat extremes, precipitation, sea level rise, and sea ice concentration for different areas.

“This is an opportunity more than ever for regional leaders around the world to look at the specific findings for their region, take those to their constituents, and enact policies to support decarbonization,” Sullivan says. This includes supporting clean energy, stopping the construction of new fossil fuel infrastructure, reducing consumption of energy, water, and plastic products, reshaping agriculture, and transitioning communities that currently rely on the fossil fuel industry.

“Like [in] so many [other] parts of the world, in the northeastern United States I worry about extreme heat events and sea level rise,” says Jeff Geddes, a BU College of Arts & Sciences assistant professor of earth and environment.

This is an opportunity more than ever for regional leaders around the world to look at the specific findings for their region, take those to their constituents, and enact policies to support decarbonization.

Geddes, who studies air quality and the effects of extreme heat, says the rise in temperatures has resulted in the deaths of hundreds of people per year in the northeastern United States. “I worry deeply about how Boston will manage the threat of sea level rise by the later parts of this century,” he says. Sea level rise along the mid-Atlantic coast is already outpacing the global average, resulting in more frequent flooding.

Carbon dioxide levels in the air are now at their highest point in the last two million years, the IPCC report says, and greenhouse gas emissions released into the atmosphere by burning fossil fuels like coal and gas, deforestation, and other human activities are the clear cause. The planet has already locked in 1 degree Celsius, or about 1.8 degrees Fahrenheit, of warming compared to preindustrial temperatures.

The report’s authors advise that there is still a window of opportunity to limit global warming to a total of 1.5 degrees Celsius above preindustrial temperatures, the goal set by the 2015 Paris Agreement. But that is only if there are deep reductions in all greenhouse gas emissions immediately. Otherwise, global surface temperature will continue to increase until at least the mid-century. And the same is true for ocean temperatures, which have warmed dramatically since the 1970s.

“We just lived through the hottest five-year period since trustworthy observations began,” Geddes says. “I think more and more folks are seeing this with their own eyes and experiencing many of the consequences [of climate change] firsthand…the takeaway for the general public should be that there is no need to wait for additional evidence before acting. Action is required now.”

Air quality trends are poised to move in the right direction over the next century, Geddes says, thanks to more and more countries adopting strict emission controls to reduce direct emissions of chemicals that cause the worst air pollution—such as nitrogen dioxide (NO2), which is a precursor to urban smog, and sulfur dioxide (SO2) which is a precursor to fine particulate matter in the atmosphere. However, hotter average temperatures tend to make air pollution worse for a variety of reasons. “Direct emissions of air pollutants will have to be reduced all the more in order to achieve the same air quality targets under a warming climate over the next century,” he says. Lower income neighborhoods and communities of color are also more likely to bear the burden of higher exposure to air pollution, past research has found.

Sullivan’s studies suggest that it’s not too late for humans to turn the tide in the right direction.

“The good news is that my research and others’ have shown that humans have solved daunting collective action problems around the world,” she says. Although there are few successful examples to draw from—because of the sheer scale of the transformation necessary to address climate change—her research about planning for drought in the western United States indicates that there is actually more support for bold transformational policies than most decision makers may realize.

“If decision makers and those in charge at local, regional, and national levels are willing to be more inclusive of who they are listening to and including in decision-making, we have a real opportunity to not only avert the worst impacts of climate change,” Sullivan says, “but to reshape society in meaningful ways.”