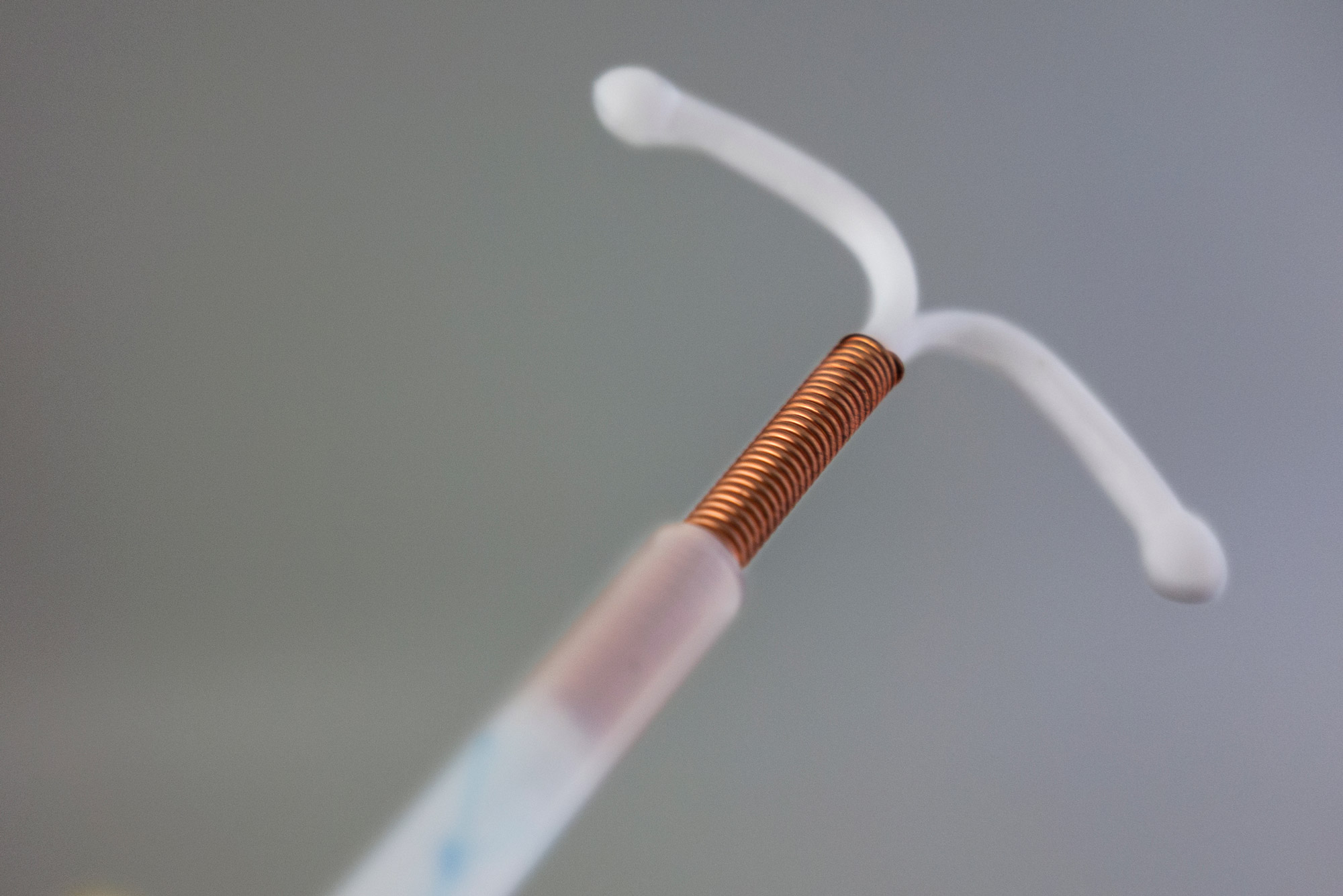 Even intrauterine devices like this one, containing only copper but no hormones, are considered by the US FDA to contain a drug—so they must undergo stricter regulations that are required of drug-device combination products. This designation has led to a very safe—but extremely  short—list of new-generation IUDs available in the US. Photo by Lalocracio/iStock

From the Dalkon Shield to Britney Spears’ IUD: Why Diverse Teams Need to Be Involved in Contraceptive Design

Catherine Klapperich is a Boston University College of Engineering professor of biomedical engineering, materials science and engineering, and mechanical engineering, and director of BU’s Precision Diagnostics Center. She recently was elected to the fellows of the American Association for the Advancement of Science (AAAS), in recognition of the advances she’s made in developing diagnostic tools for global and women’s health.

Why is the [birth control] situation so dire? Why do [people who can get pregnant] take the pill and accept higher risk of life-threatening blood clots than the rates that temporarily halted certain coronavirus vaccines from being administered during a global pandemic? And why are some intrauterine devices (IUDs)—which may be better options for some Americans—approved for use by people in other countries, but not available here in the US?

The answer to all these questions is that the reproductive health of people who can get pregnant is simply not a high enough priority in our society. We settle for good enough when we could have great.

Case in point: Britney Spears described how under her conservatorship, she was required to be fitted with an IUD and is prohibited from having it removed without her father’s permission or the permission of the court. Presumably, the goal is to stop Ms. Spears from becoming pregnant with additional children without the express authorization of her custodian—her father.

There are many discussions to have about Spears’ rights, disability rights, and forced reproductive control—the topic is an intersectional minefield. (An amazing discussion with a journalist who is an expert in the field and who has a disability was broadcast on Slate’s What Next podcast this week.)

My own thoughts on the subject would require me to use profanity in a story that I know could be read by my [research] program manager at the National Institutes of Health. When I resort to profanity, that usually means I am out of comfortable intellectual waters. But I can discuss with a fair amount of authority what the IUD itself is, its history in modern times, and how it has succeeded and failed as a medical device for people who want to avoid becoming pregnant. So, let’s start there.

Why the IUD fell out of favor

If you are my age (49) or older, you first learned about the IUD from horror stories told about the Dalkon Shield. The Dalkon Shield was an IUD invented in the early 1970s by a gynecologist, Hugh J. Davis, who was known as an “intellectually arrogant” person that didn’t take criticism well. So, it wasn’t a very inclusive design team—just one man. He later recruited another man, electrical engineer Irwin Lerner, to help him finalize and market the device.

The Dalkon Shield was rushed to market with insufficient clinical data, and the inventors published their premarket data without acknowledging their financial interests in the device. They sold the device design to the A.H. Robins Company, and Davis continued to act as a consultant and proponent of the device for many years.

At the time, birth control pills were popular, but the high levels of hormones in those pills was concerning to many. The side effects of the pill were and still are troublesome, and can sometimes be very serious. In the 1970s, the available pills contained nearly 100 times more progestin and 3 to 5 times as much estrogen as typical combination pills contain today. More importantly, the A.H. Robins Company, [which stood to see a profit from the Dalkon Shield’s adoption] did something new that we now take for granted: they marketed the ever-loving heck out of that device.

But they were marketing a device that had not been well-vetted from a clinical perspective. At that time, you could invent and patent a new medical device that was meant to be inserted inside a uterus and worn for years at a time with absolutely no federal oversight.

As a result, there were no regulations that limited or specified the set of materials to be used to construct the device. When A.H. Robins decided to use a new material for the string, the company was able to make that change without consulting any oversight body or performing additional testing to make sure that it was safe. It turns out that the filament they used for the string was made up of several smaller filaments, like a cable consisting of several smaller wires wrapped together. The little spaces in between the multifilament string were small enough to give bacteria from the vagina a pathway into the uterus.

These bacteria caused infections in people wearing the device that were later recognized as pelvic inflammatory disease. All told, the Dalkon Shield resulted in the injury of hundreds of thousands of women and the documented deaths of at least 18. The Dalkon Shield disaster triggered a new federal law to be enacted in 1976, which requires medical devices to be regulated by the US Food and Drug Administration (FDA). Prior to the law’s enactment, only drugs had been regulated.

From no FDA regulation to prohibitively strict regulation

As a result of the Dalkon Shield injuries, deaths, related lawsuits, and finally its recall, IUDs fell out of fashion in the US. Even though many other non-Dalkon devices existed, the market for IUDs was nonexistent. The FDA approved the first new-generation IUD in 1984, and that device was available in the US in 1988. Several more years passed before the current crop of modern IUDs began to come on the market between 2001 and 2016.

Today, if a device failure occurs, doctors and patients are encouraged to report the failure to the FDA. Meanwhile, IUD distributors and manufacturers are required to report issues. The FDA compiles a database of these failures and though the reporting system is largely voluntary, the FDA does investigate to see if they are part of a pattern.

That’s because IUDs are now considered Class III medical devices—the highest-risk category that also contains things like pacemakers and deep-brain stimulation devices—which require premarket approval before they can be sold in the US. Even IUD devices containing only copper—no hormones—are considered to contain a drug, so they must undergo stricter regulations that are required of drug-device combination products. The cost of obtaining Class III medical device approval from the FDA is too high to make selling in the US market attractive to many foreign manufacturers of IUDs. Most agree that this has led to a very safe—but short—list of new-generation IUDs available in the US. The downside of this enhanced regulation is that many devices that may be more appropriate for some people are approved in other countries, but are not available here.

The stain of the Dalkon Shield has faded a bit. Younger people are more likely to seek an IUD as a long-term, reversible form of birth control. However, the legacy of birth control—designed, developed, and marketed by people who cannot become pregnant—is still a part of medical care today. And all highly effective birth control methods have undesirable side effects. (Well, maybe not vasectomies, but that requires a monogamous relationship with someone with a good amount of self-knowledge and the foresight for maximum efficacy [in contraception]—a rare situation.)

Everyone else [with a uterus] must figure out what side effects and inconveniences we are willing to deal with to manage when we do and do not want to bear children, if at all.

One way to make better contraceptive choices a priority is to have people who can become pregnant directly involved with the design and development of contraceptive devices. Involved from the earliest stages. We need the viewpoints of these people as patients and as clinicians, designers, and engineers. And we all need to think just a little more about each other’s healthcare.

Simply, when the people who are the main users of a technology are not consulted in the design phase of that technology, the results for the end users are subpar and sometimes outright harmful.

Diverse teams can save lives.

As for Spears, it seems clear that her autonomy has been robbed without due process. Since you cannot remove an IUD on your own, she is effectively at the mercy of the state with respect to her ability to bear more children. Medical science may have given her a safer device than was available in the 1970s, but disability law has kept her rights in the 1920s.

From the Dalkon Shield to Britney Spears’ IUD: Why Diverse Teams Need to Be Involved in Contraceptive Design

There is 1 comment on From the Dalkon Shield to Britney Spears’ IUD: Why Diverse Teams Need to Be Involved in Contraceptive Design

From the Dalkon Shield to Britney Spears’ IUD: Why Diverse Teams Need to Be Involved in Contraceptive Design
1
share this