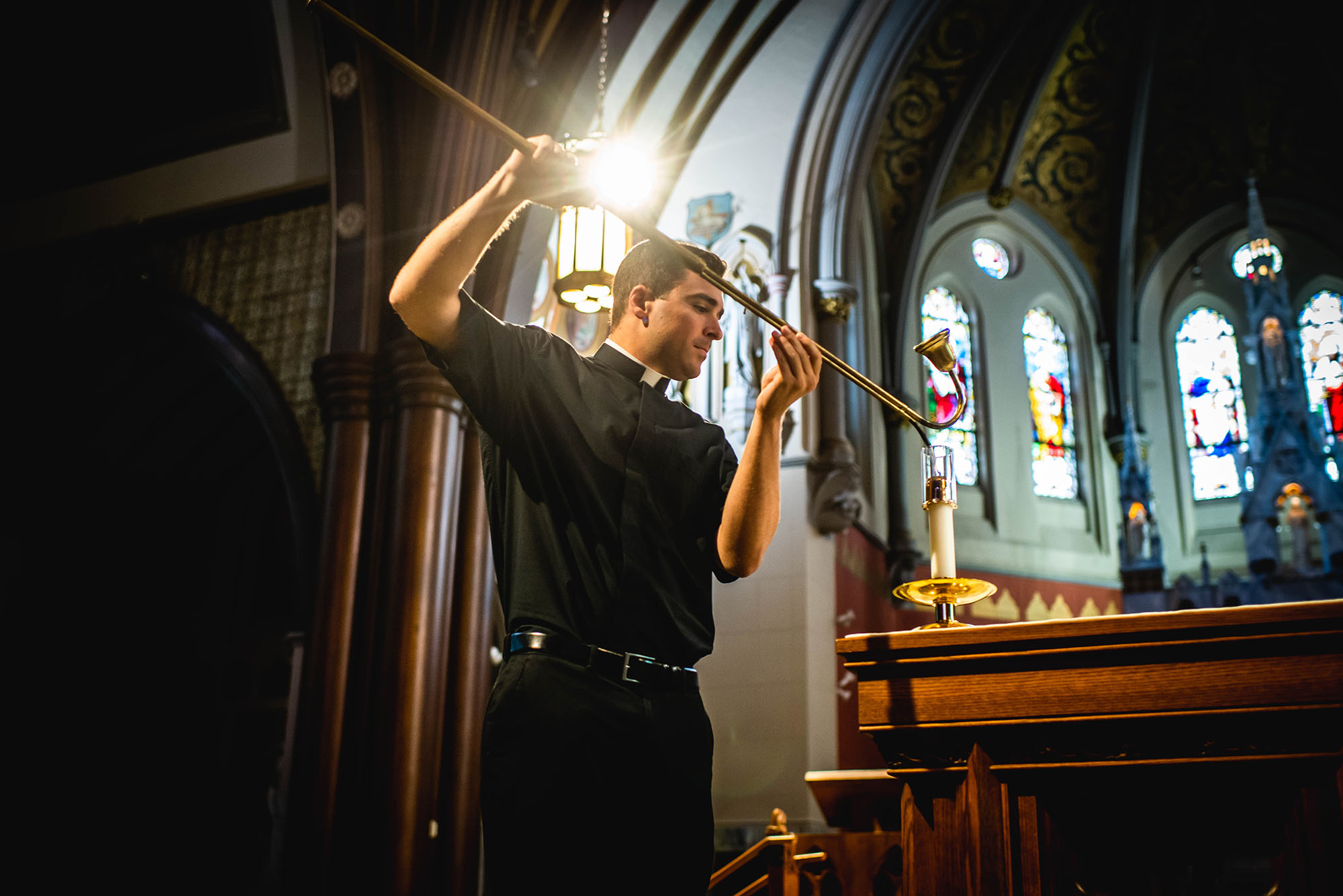 As a College of Communication student, the Rev. Robert LeBlanc (CGS’11, COM’13) was a journalism major with a passion for sports, pondering a career in print or broadcast. Now, his education helps him broadcast not games, but the word of God through homilies and social media posts.

Priest Shortage? Why a Surprising Number of BU Alums Are Entering the Catholic Priesthood

“Justice means always dealing with another person in charity, even if he or she has sinned against us,” the Rev. Robert LeBlanc preaches to the two dozen parishioners scattered in the pews at Brookline’s St. Mary of the Assumption Catholic church. Winding down their workweek in prayer on this summer Friday morning, some are contemporaries of their 30-year-old priest—two couples watch over baby strollers—while the gray hair or bent backs of others bespeak a more mature vintage.

LeBlanc (CGS’11, COM’13), clean-cut and with a quick, welcoming smile, has been ordained all of two months. He proceeds with the Mass, consecrating the bread and wine to become what Catholics believe to be the body and blood of Christ. At the end, he explains to the parishioners why a woman with a camera has been photographing him during the service: Bostonia is interviewing him for a story on the eye-catching number of alumni (at least five) who have journeyed from BU to Catholic ordination, or its brink, in the decade since 2011. Then he processes up the aisle and out the church door, chatting with his flock as they depart for their day.

One woman ribs him about the photographer: “I thought you were going into modeling.” It wouldn’t have been LeBlanc’s first radical career detour.

As a BU student, the journalism major scurried to classes along Comm Ave while pondering print or broadcast as the best postgrad outlet for his sports passion. Now, his College of Communication education helps him broadcast not games, but the word of God through homilies and social media posts. Along with LeBlanc and his fellow Terrier priests (one will be ordained next year), BU lays claim to an auxiliary bishop in Boston: the Most Rev. Robert Reed (COM’13) earned a master’s degree in television management, which he applies as president of CatholicTV.

The flow of clerics from the Charles River Campus is surprisingly robust when compared with the Jesuit institution across town: Boston College averages one seminarian a year, BC spokesperson Jack Dunn says. BU’s numbers are especially impressive for a secular ivory tower with a Methodist heritage, especially at a time when the priesthood is hardly a growth industry.

Since 1970, the US Catholic clergy has shrunk from 59,000 to fewer than 36,000, according to Georgetown’s Center for Applied Research in the Apostolate. This owes partly to the difficult demands of the job; few want to take on grueling hours in a profession with an enduring labor shortage and a requirement of celibacy.

“From a very young age, I wanted to get married, I wanted to have kids and be a father,” LeBlanc says. “My prayer became, Lord, if you want me to be a priest, please give me that desire. [Having a family] is a desire that I think every priest should have, even before the priesthood, because it means you want to give of yourself in service…. As I surrendered more and more to the Lord, I felt that He was calling me to give myself in another way…and to have many spiritual children.”

Another pitfall to ordination is the Church’s social teachings, which engender dissent even among Catholics. According to a 2015 Pew Research Center survey, more than half of American Catholics say cohabitation is not sinful, and almost 4 in 10 say the same about homosexuality. Three-quarters want the Church’s ban on artificial contraception lifted; almost 6 in 10 think the priesthood should be open to women. (Support for Church teachings is stronger among Catholics who regularly attend Mass, and on abortion, a majority of all Catholics agree with the Church’s condemnation.)

Finally, the Church’s moral authority took a hit when the global sexual abuse scandal was exposed—initially in 2001 by the Boston Phoenix on cover-ups in the Boston archdiocese, then the following year in a deeper, more documented series in the Boston Globe. Since then, the drip-drip-drip of revelations has continued—a 2018 Pennsylvania grand jury report on decades of child molesting, for example, and the 2019 defrocking for sexual abuse of former Washington, D.C., cardinal Theodore McCarrick, who this year became the highest-ranking American cleric criminally charged in the scandal, for allegedly abusing a teen in the 1970s.

Reed attributes the University’s clerical conveyor belt to the campus ministry program—“one of the largest at any of the colleges and universities in the commonwealth”—and to the “great priest chaplains and great campus ministers who have demonstrated in their own priesthood and ministry a joy to being Catholic and living a full Catholic life.”

That would mean the archdiocese is doing something right in choosing men and women for the Catholic chaplaincy, which has seen turnover at BU in the last decade, in contrast to the stability during the previous 10-year tenure of the Rev. Paul Helfrich.

“[Helfrich] was highly instrumental in my own discernment, both in the example of his holy and joyful priesthood and in being a source of encouragement,” recalls the Rev. Carlos Suarez (CGS’01, CAS’03). When Helfrich’s religious order reassigned him to Florida in 2009, the archdiocese appointed Sister Olga Yaqob as University chaplain. Yaqob, only the second woman to hold the position in BU’s history, became a campus icon, famous for her warm hugs for, well, everyone.

But she lasted just a year, leaving to start a new order of nuns in Boston, and was replaced by the Rev. John McLaughlin. Acknowledging that he was no hugger, he pronounced the center a “safe house for kids” to relax apart from religious observance and converted Yaqob’s office into a lounge to show he meant business. He was succeeded in 2013 by the Rev. David Barnes, who brought his German shorthaired pointer and social media savvy (he blogged and tweeted about his work). Barnes stayed longer than anyone since Helfrich, until the Rev. Kevin Staley-Joyce took over in 2020.

Many of these chaplains formed strong bonds with students who would go on to become brother clergy. “John McLaughlin first told me I should consider the priesthood” when he was a junior, LeBlanc says, which he did during two postgrad years working for the Boston University Catholic Center. The Rev. Michael Zimmerman (CAS’11, GRS’11), now assistant vocation director for the Boston archdiocese, says Yaqob was among those who taught him “that God loved us and had good plans for our lives, which inspired us to ask God what those plans were.”

Rev. John Gancarz (ENG’11,’13), assigned to Connecticut’s St. John Bosco Parish, was a teen when the Globe reported on what he calls “grievous and hypocritical” abuse by men called to care for the vulnerable. Gancarz nevertheless pursued ordination because he defines the Church as something transcending flawed clergy—the teachings and example of Christianity’s inspiration. “Other Catholics and I practice the faith not because of the moral integrity of the clergy but because of the holiness of Jesus Christ,” he says.

“When I was considering being a priest,” Gancarz adds, “I wanted to join the vast majority of good priests who seek to assist in healing and to contribute with faithful Catholics in making the safest environments within the Church and in society at large.”

Zimmerman says his generation “grew up in the midst of the abuse crisis and largely only came to faith after the fact, so at least for myself it wasn’t a major factor.” He believes the trauma of revelations may have dealt a harder blow to the laity, as it “bred a culture that looks down on the Church, which is deterrent to many investigating it more closely, not necessarily as priests [but] more so just as believers.”

By contrast, Zimmerman says, those contemplating priesthood are “more concerned, on a personal level, about being falsely accused of abuse and being removed from ministry. They wouldn’t be interested in becoming a Catholic priest if they didn’t see the Church as a tremendous force for good, despite the sins and failings of [Catholic] individuals and institutions.”

This commitment to the religious life has been made by some who had majored in science, including Zimmerman (chemistry), Gancarz (electrical engineering), and the Rev. Denis Nakkeeran (human physiology). Nakkeeran (Sargent’14), parochial vicar at Holy Name Parish in West Roxbury, Mass., says he’s often quizzed on how he reconciles science and faith. “It was absolutely not my original intention to enter ministry,” he says. “My original plan was to do the premed track.” He took the Medical College Admission Test before the Catholic Center’s “vibrant and loving” community led him to ponder the priesthood.

“Science seeks to learn the truth about how the universe works,” Nakkeeran says. “Faith, on the other hand, is knowledge of reality that is directly revealed to us by God. By definition, we cannot know these things with certainty, like we can with many scientific facts. These data of faith, nonetheless, are true because it is God who reveals them.”

Zimmerman sees an analogy between the two, as scientists posit some realities that haven’t been nailed down definitively—the dark matter assumed to fill the galaxy, for example—requiring a hop, if not a leap, of faith. “I sometimes tie in science in my preaching,” says Zimmerman, whose homilies can cover quantum mechanics, fundamental forces, and thermodynamics as easily as the Immaculate Conception.

That reasoning, of course, depends on belief that there is a God. But BU’s priests have ample predecessors along those lines in Catholic scientists, including monk-geneticist Gregor Mendel and canon-astronomer Nicolaus Copernicus, as well as the current leader of the Catholic Church. Pope Francis was a chemist before entering the seminary.

“Science depends on faith all the time,” says Zimmerman, “natural, not supernatural, albeit. And reason helps faith to grow in depth.”

Priest Shortage? Why a Surprising Number of BU Alums Are Entering the Catholic Priesthood

There are 13 comments on Priest Shortage? Why a Surprising Number of BU Alums Are Entering the Catholic Priesthood

Priest Shortage? Why a Surprising Number of BU Alums Are Entering the Catholic Priesthood
13
share this