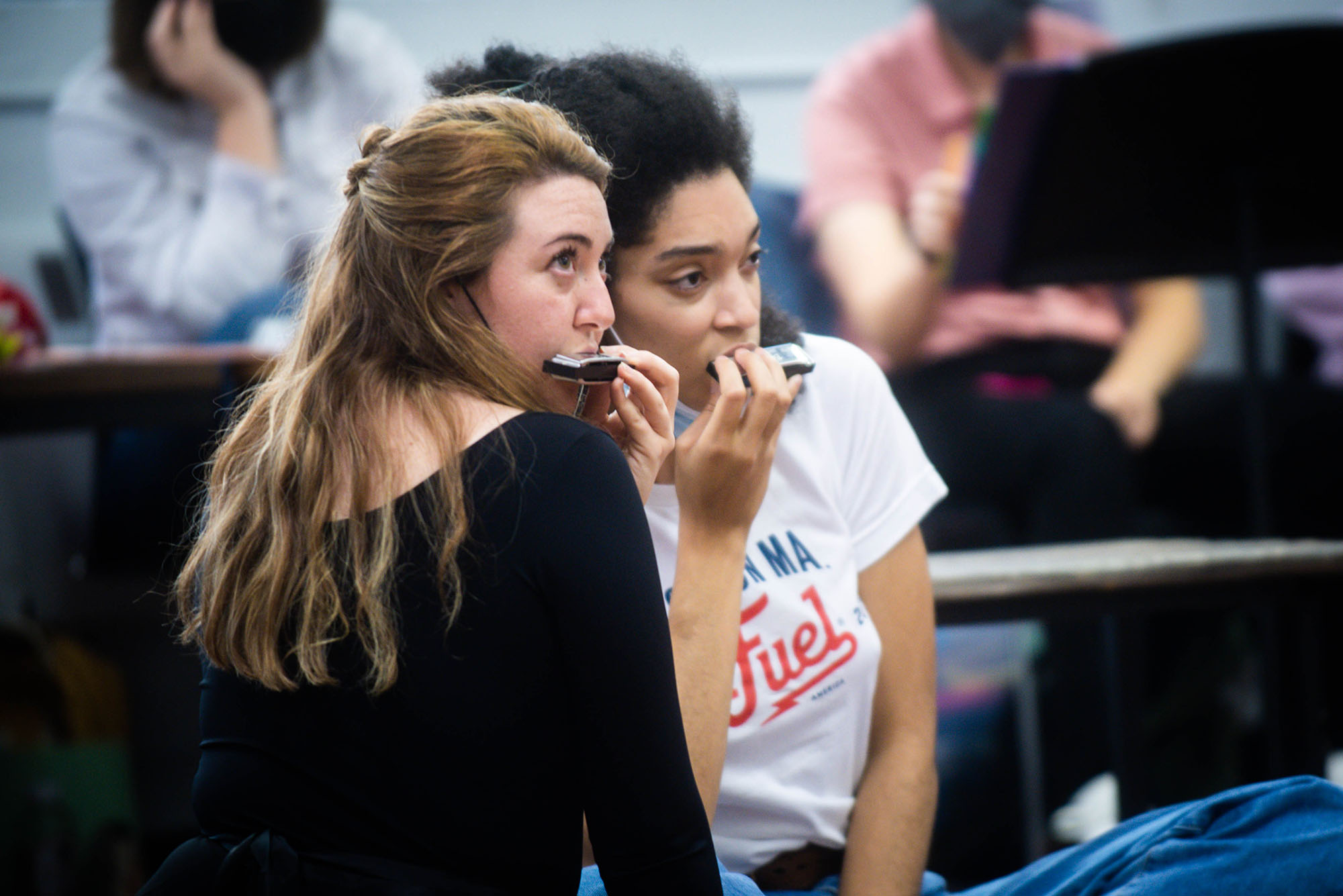 Danielle Pribyl (CFA’22) (left) and Alexis Peart (CFA’23) in a scene from Proving Up, a new opera by Missy Mazzoli (BUTI’98, CFA’02) about Nebraska homesteaders in the 1860s, part of the College of Fine Arts 25th annual Fringe Festival.

BU’s event, which takes its name from the long-established Edinburgh Fringe Festival, the world’s largest arts festival, presents new or rarely performed works to Boston audiences. This year’s repertoire includes two new operas, one written by a Boston University Tanglewood Institute and CFA alum, as well as a play that draws on the talents of CFA’s Schools of Theatre, of Music, and of Visual Arts.

The return to live theater is a welcome change from the past year-and-a-half of Zoom concerts and event streams, says Harvey Young, CFA dean and professor of theater and a College of Arts & Sciences professor of English. “Part of the magic of the theater is the ability to sit side-by-side with others and experience the whole range of emotions together,” Young says. “I am looking forward to hearing laughs and applause again without having to invite people to unmute themselves.”

This year’s festival starts today, October 15, and runs through November 6. Performances of all three Fringe shows will be held in BU’s Joan & Edgar Booth Theatre. Tickets are free for anyone with a BU ID, $15 for the general public.

What’s on first? The Infinite Energy of Ada Lovelace (October 15-17), a new 40-minute opera composed by Kamala Sankaram (music) and Rob Handel (libretto). The opera captures Ada Lovelace (the daughter of Romantic poet Lord Byron), often referred to as the world’s first computer programmer, as she assists on a friend’s mathematical project—a pursuit that was unheard of for high-stature women in the 19th century. The show director is Emily Ranii (CFA’13), Wheelock Family Theatre artistic director, and music director is Allison Voth, a CFA associate professor of music and opera.

The second production on the docket is Proving Up (October 22-24), an opera based on a short story by Swamplandia! author Karen Russell. The new piece is the work of composer Missy Mazzoli (BUTI’98, CFA’02) and frequent collaborator librettist Royce Vavrek. Proving Up is the story of the Zegners, a family of homesteaders trying to make it on the dry Nebraska plains in the 1860s. Their only problems? A dearth of windows, an inspector who may or may not exist—and oh yeah, ghosts.

“These operas by two living female composers each offer a compelling story that audiences will be moved by,” promises Proving Up conductor William Lumpkin, a CFA associate professor of music, opera, and BU Opera Institute artistic director. “Ada Lovelace was a scientist whose creativity exceeded the rest of the world’s expectations of her due to her gender, and the nonstop energy of the score propels the story forward. Proving Up begins as a uniquely American story about the struggles of a Nebraska farm family attempting to improve their lives, and the story unfolds with an unexpected and devastating turn of events.” Nathan Troup (CFA’04), a CFA lecturer in opera, is stage director of the piece.

Rounding out this year’s festival is Colossal (November 4-6), written by Andrew Hinderaker. The movement-heavy piece follows star college football player Mike (played by a disabled actor) in the wake of a tragic spinal cord injury, and it tackles themes of love, ability, masculinity, and how we use our bodies to communicate along the way.

Using our bodies to communicate is director Yo-EL Cassell’s favorite part of the play. “One of my personal favorite lines spoken by one of the characters is, ‘Your body is a vehicle for language,’” the CFA assistant professor of movement says. “As I reflect on what this line means in this moment of time, where the very act of moving through life can be filled with navigating corridors, there is nothing more essential than embracing our body as an instrument for identity, expression, and communication.”

Colossal is more than just a play, Cassell stresses. It’s a multidisciplinary experience—CFA’s School of Visual Arts and School of Music are both collaborating—that uses choreography to question how we perceive and reveal. It’s also worth arriving early for: Colossal features a preshow component that begins “the moment the theater doors open,” Cassell teases.

Both he and Lumpkin are excited about seeing students back on stage, in front of an in-person audience. Staging this year’s Fringe Festival, both say, represents coming together again after so much time apart.

“There is nothing more essential, more moving, and more truthful than seeing bodies in space—in person—interacting, conversing, connecting, and most importantly, figuring out how to move through an experience together,” Cassell says.

“It’s been a sheer joy to witness the infinite energy of the students who are collaborating on these projects,” Lumpkin says. “The excitement is palpable.”

All Fringe Festival performances are in the Joan & Edgar Booth Theatre, 820 Commonwealth Ave. Tickets for each performance are $15 (free for those with a valid BU ID). Find more information here.