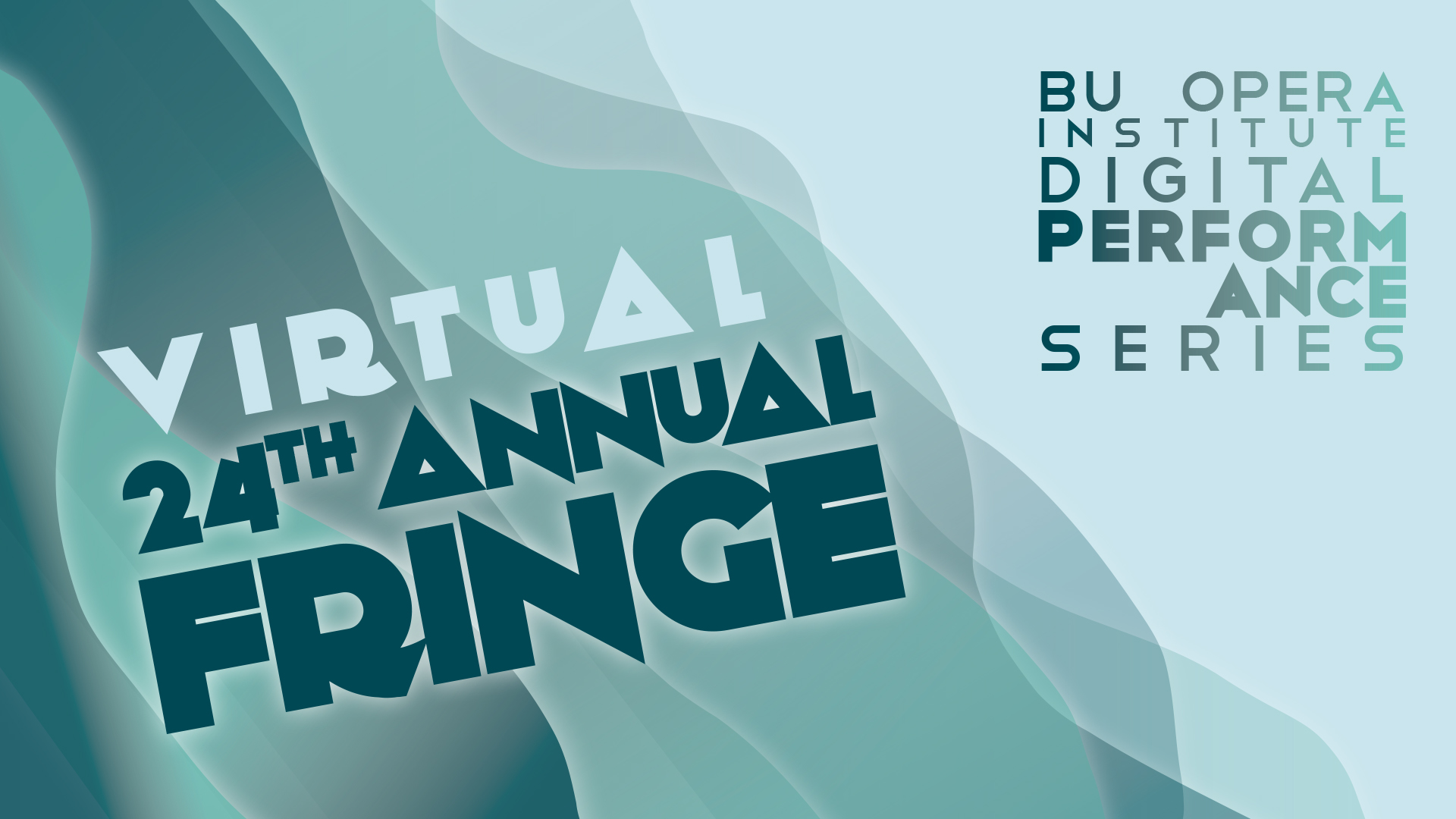 Artistic Director of BU Opera Institute William Lumpkin reflected on the ways the artists have adapted this year. “Our response to the pandemic has been one of artistic and technological exploration, utilizing the School of Theatre’s Studio One space to produce cinematic operatic creations in consort with the School of Music Production team along with our valued collaborative efforts with the School of Theatre in the area of lighting design.”

The Virtual Fringe, the 24th installment of the festival, will consist of three series, each released individually during the month of April. For Series 1 and 2, says Lumpkin, “we have focused on the individual as storyteller, allowing for each student to choose and develop their own ‘short story.’” Directors include Jim Petosa, Emily Ranii and Nathan Troup and featuring works by Jake Heggie, Libby Larsen, Gilda Lyons, Patrice Michaels, Ben Moore and Gian Carlo Menotti.

The third and final series is a unique project developed and curated by Allison Voth and directed by Emily Ranii. “This project celebrates the work and passionate tenacity of composers and poets in the midst of a world crisis: World War I and the 1918 Flu Pandemic,” says Voth. “Some survived; many did not. Works performed will include little known and rarely heard songs by composers Cecil Coles, Frederick Kelly, W. Denis Browne, Fernand Halphen and Rudi Stephan who most certainly would have gained fame and long-lasting recognition had they lived.”

“Watching our students embrace these projects has been a truly amazing experience,” says Lumpkin. “When something cherished is at the precipice of being lost, our artistic drive becomes unrestrained in its inexorable journey to collaborate, create and share. We thank you for joining the journey.”

The 24th annual Fringe is an entirely virtual audience experience, released online in three installments. Stream the performances at bu.edu/cfa/livemusic.

The third series features second-year Master of Music students who worked with Allison Voth and Emily Ranii on a series of songs based on poems from World War I and the 1918 Flu Pandemic.

The most important factor BU Opera Institute considered as plans for the Fringe Festival was the health and safety of students, faculty and staff. In addition to abiding by the Boston University COVID-19 Health and Safety Protocols (including face coverings, social distancing, symptom monitoring and testing), the team created dual rooms for safe coaching, allowing for a singer and the coach to be connected in two separate rooms with a non-latent audio and video connection. They also used “air-scrubbers,” and the rooms were aired out between each session. In an effort to preserve the critical aspect of the exploration and discovery during in-person staging rehearsals, face coverings were worn at all times.

For the final recording of each project, the stage director, pianist, lighting design team and performer were each located in separate remote locations with a non-latent audio and video connection. Cameras were also operated remotely, and the performer was alone in Studio ONE.  This was the only time singers performed unmasked.

“When something cherished is at the precipice of being lost, our artistic drive becomes unrestrained in its inexorable journey to collaborate, create and share,” says Lumpkin. “We thank you for joining us!”

The Opera Institute at CFA School of Music is an intensive, highly selective two-year performance based training program for emerging operatic artists. A professional faculty and renowned guest artists provide personal support and training in all areas pertinent to a career in opera, including voice, acting, languages, and movement styles. Additionally, the Opera Institute also selects undergraduate and graduate singers from the School of Music who demonstrate true operatic potential and have mastered an intermediate integration of acting, vocal, and movement skills for the Opera Theater, Opera Workshop, and Opera Project programs. Learn more at bu.edu/opera.