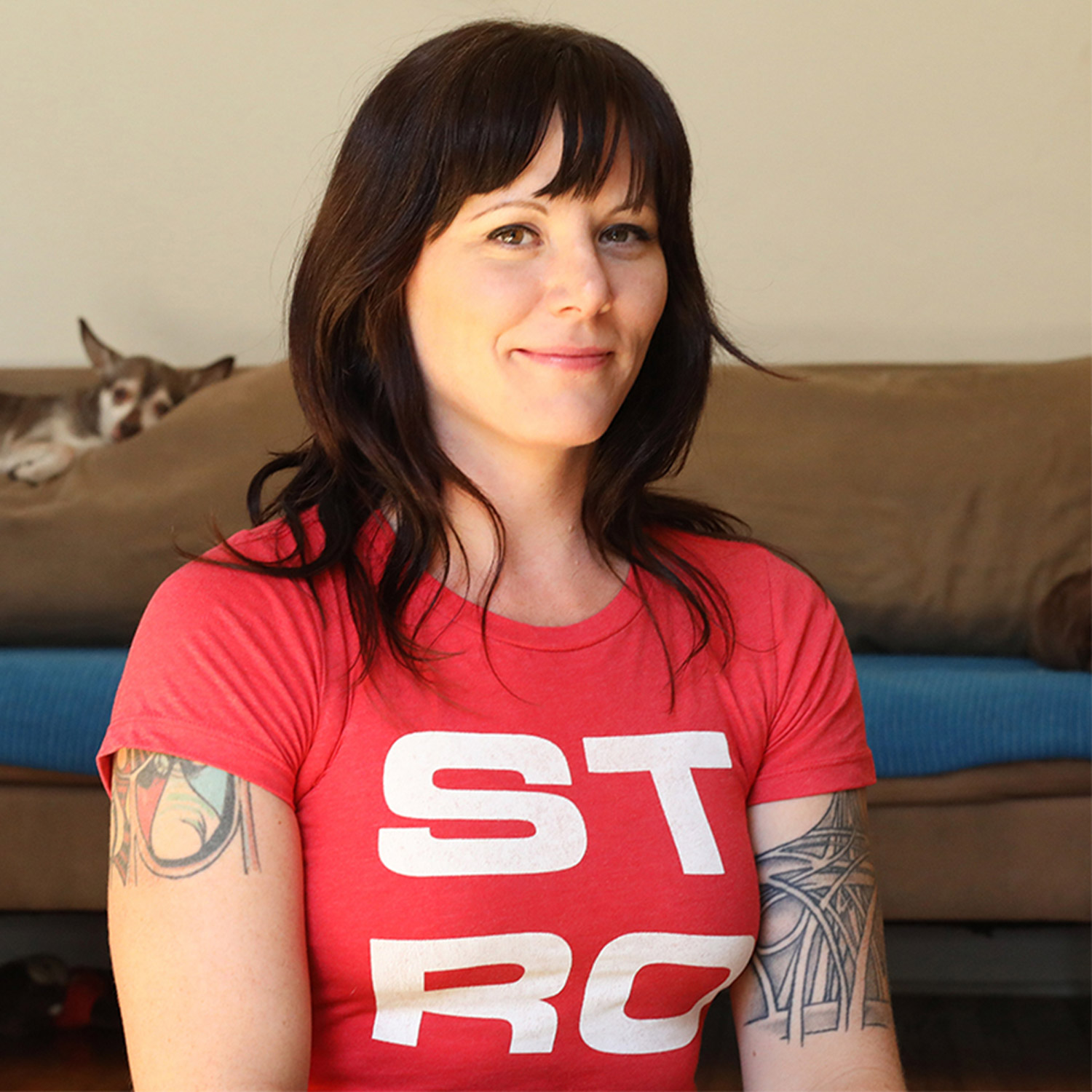 Micki Krimmel’s company, Superfit Hero, offers athletic apparel in a wide range of sizes—from XS to 5XL. Everything the company produces is ethically made in the United States, with certified factories that pay a living wage, says Krimmel (COM’99). Photo courtesy of Micki Krimmel

Micki Krimmel remembers how she felt the first time she dead-lifted 300 pounds: empowered. “It completely changed my relationship with my body,” she says.

Krimmel had taken up weightlifting as a way to train for roller derby in Los Angeles. She thought the sport would be a fun way to stay fit. But the intensity of roller derby quickly became central to her identity. “You’re putting 100 percent of yourself into this thing,” says Krimmel (COM’99), “and you’re doing it with other people who are doing the same. Practices are three hours long and you’re sweating your ass off, but within that there’s a complete connection that you can’t really create outside of a sport environment.

“You see women in a full contact sport being so badass and fearless, and it’s just amazing.”

She played nine seasons for the Angel City Derby Girls, retiring in 2016. “The roller derby community is superinclusive and very body-positive,” Krimmel says. “It was the first time I’d experienced such a profound connection to my body, and it created a sense of confidence that permeated throughout the rest of my life.”

Krimmel caught the entrepreneurial bug shortly after graduating from BU. She was one of the first employees of the start-up film production company Participant Media, where she worked closely with studio partners to create and manage interactive marketing campaigns for films like Al Gore’s documentary An Inconvenient Truth.

The work was the impetus for Krimmel to start her own company. In 2009, she created NeighborGoods, an online community that allows neighbors to share goods and services. Entrepreneur magazine named NeighborGoods one of the “Most Brilliant Companies of 2011.” Krimmel sold it in 2013.

For her next venture, she called on her experience in the intense world of roller derby.

“I knew my next company had to be about the intersection of fitness and feminism,” Krimmel says, “as a tool for empowerment, as opposed to trying to fit some unrealistic aesthetic ideal for the pleasure of other people.”

She had no background in the fashion industry, but she researched the market and figured out what product she could sell to help tell her story. She found a huge gap in the market for plus-size activewear. (According to a 2016 study in the International Journal of Fashion Design, Technology, and Education, the average size of an American woman is 16 to 18.)

“Fatphobia runs so deep in this industry that companies are willing to ignore the obvious—that they are missing out on sales from the majority of the population,” Krimmel says.

I knew my next company had to be about the intersection of fitness and feminism as a tool for empowerment, as opposed to trying to fit some unrealistic aesthetic ideal for the pleasure of other people.

She funded Superfit Hero in 2015 through a  Kickstarter campaign. The company offers a wide range of sizes—from XS to 5XL—and everything it produces is ethically made in the United States, with certified factories that pay a living wage, according to Krimmel.

“Fashion is one of the most regulated industries,” she says, “but there’s still a lot of sweatshops out there, including in the United States.”

A 2016 report on the fashion industry in Los Angeles by the Garment Worker Center, the UCLA Center for Labor Research and Education, and the UCLA Labor Occupational Safety and Health Program, found “conditions in the city’s garment workplaces are deeply unsafe and unhealthy for many of those who make what is stocked at popular clothing shops and department stores.”

“Basically,” says Krimmel, “they’ll set up shop in a garage and use undocumented workers and pay them below minimum wage, and no break schedule. So to make ethical production a priority as a small business and make sure that you’re working with certified factories was something that I’ve taken seriously from day one.”

The commitment has paid off. Superfit Hero has been profitable since the beginning, she says, reinvesting everything it makes into creating new products and growing the business. Sales have doubled every year; Superfit Hero did nearly $1 million in sales in 2019.

“My approach is to grow sustainably, based on customer reviews and referrals,” Krimmel says. “I would rather grow slowly with a community of people that support what we believe in than just do blast marketing to people who don’t necessarily share values.”

She celebrates her like-minded community on the Superfit Hero website by showcasing athletes who use the company’s products. One is US Olympic weightlifter Sarah Robles, who has her own collection of shorts, capris, and leggings. Robles was the 2016 Olympic bronze medalist and the 2017 International Weightlifting Federation world champion and is a 2020 Team USA Olympic hopeful.

Krimmel also sponsors sports teams that represent “the values and ideals of athleticism, empowerment, and inclusivity.” Here, roller derby has a place of pride, with nearly a dozen teams represented. After all,  she says, the venture wouldn’t exist if it weren’t for her decade of experience in the roller derby world.

“I wouldn’t have been the person to create it without that experience,” she says. “Inclusion and diversity are just so central to that community, and being surrounded by other people who share those values reinforced their importance.”