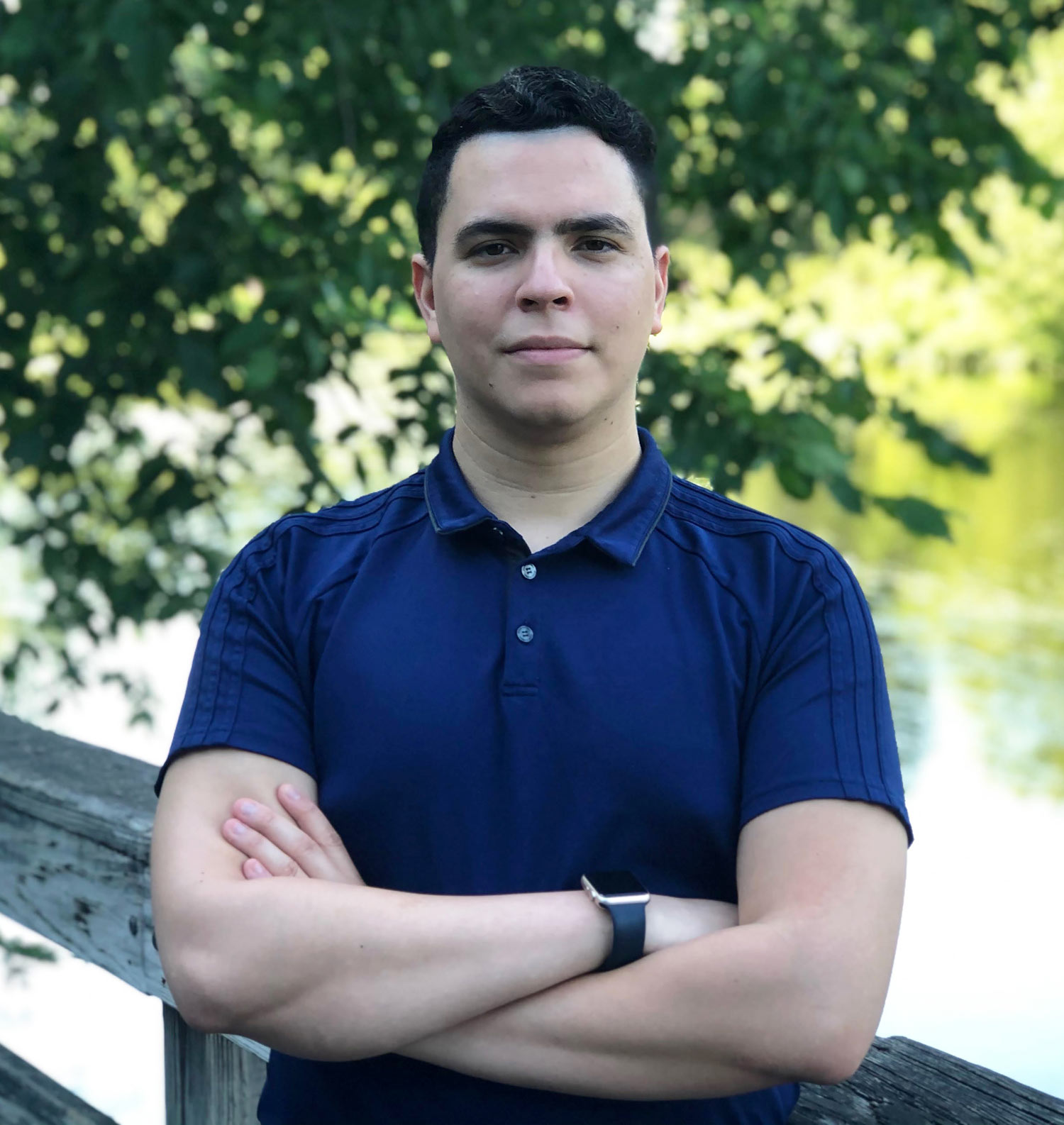 BU engineering student Santiago Gomez was so perturbed when he encountered the terminology “master/slave” in a textbook that he wrote to its publisher, Pearson, calling for the language to be changed. Photo courtesy of Santiago Gomez

Striking Out Racist Terminology in Engineering

For decades, engineering textbooks have described electronic circuits called flip-flops as “master” and “slave,” referring to the way that one device controls the other. Although attempts have been made to change the racist language—which commonly appears, since flip-flops are fundamental to computing technology—success has not been universal. The actions of one Boston University engineering student are finally helping to change that.

Santiago Gomez, a graduate student in computer engineering, was so perturbed when he encountered the terminology in a textbook—Digital Design, 6th Edition—for his Logic Design course taught by Roscoe Giles, BU College of Engineering professor of electrical and computer engineering, that he wrote to the textbook’s publisher, Pearson, calling for the language to be changed.

In this video, BU graduate student Santiago Gomez talks about why he felt compelled to take action when he came across the terminology “master and slave” in an engineering textbook. Video by Jason Kimball

“The use of the ‘master/slave’ metaphor to describe the phenomenon of combining two [circuits] is abhorrent,” Gomez wrote to Pearson. “As a Latinx student of computer engineering, I request that you update your terminology to prevent further disruption to the learning experience and to take a concrete step towards dismantling systemic racism within engineering.”

After praising the engineering content of the book, Gomez added, “The ‘master/slave’…terminology proved detrimental to my learning environment. It reminded me that Black people’s presence in the sciences is not fully respected. This issue can be remedied by updating the term to reflect current understandings of race in America.”

His letter has prompted Pearson to stop distributing the book until the text can be revised. The company is also promising to review its other publications and replace the term throughout its catalogue of textbook offerings, and to contact publishing standards bodies to stimulate broader changes.

Gomez’s letter struck a nerve not only with Pearson’s team, but also within BU’s College of Engineering. When Gomez shared his letter with Wynter Duncanson, the assistant dean for outreach and diversity at BU College of Engineering, she brought the matter to the attention of Dean Kenneth Lutchen and Clem Karl, professor and department chair of electrical and computer engineering.

“There was an immediate response [from them] to make sure this language is removed,” Duncanson said. “Karl recalled that this was the [same] language he had seen in school and that we need to use this as a learning experience and change it.”

I write to you as a recent student of your book, Digital Design, 6th Edition. This textbook provided valuable instruction regarding logic circuits. However, the use of the “master/slave” metaphor to describe the phenomenon of combining two D Flip Flops is abhorrent. As a Latinx student of computer engineering, I request that you update your terminology to prevent further disruption to the learning experience and to take a concrete step towards dismantling systemic racism within engineering.

Studying a new subject always has a learning curve. I spent countless hours identifying essential prime implicants on a Karnaugh Map and understanding the nuance of a Carry-Look-Ahead Adder Circuit. However, the most difficult element of my Logic Design semester was deconstructing the fact that my engineering textbook invoked slavery as a teaching principle. The “master/slave” flip flop terminology proved detrimental to my learning environment. It reminded me that Black people’s presence in the sciences is not fully respected. This issue can be remedied by updating the term to reflect current understandings of race in America. Github recently pledged to remove the terms master and slave from its platform, and you can take a powerful stance by doing so as well.

Racism forms the foundation of American society. Yet, I was still dumbstruck to learn that it is embedded in the basic principles of modern digital computing. The “master/slave” metaphor is proof that a black scientist did not coin this term. What is more troubling is that multiple generations of influential academics did not take pause to critique this metaphor as an ill-conceived teaching tool. This is an example of how systemic racism functions in America. It seeps into the most mundane elements of daily life and is perpetuated by white Americans when they take these elements for granted. Systemic racism in computer engineering starts with a simple flip flop, but it can culminate into algorithmic bias that has life and death consequences for black and brown people. Updating your text will stop reinforcing America’s problematic racial history. More importantly, your actions will teach future engineers to be conscious of their biases and to build computers that are inclusive of many different lived experiences.

Every facet of American society is in the midst of reckoning with its racial elements. Updating how you teach flip flops will remove learning obstacles for students of color and it will send a signal to the broader engineering community that we matter. The time is now to establish a new engineering vocabulary that reflects not only the advance computers that we want to build but also the equal and just America that we want to create.

Lutchen suggested reaching out to the national engineering community to make sure other leaders are aware of the need to make the change.

Giles, one of the longest-serving Black faculty members at BU, has encountered the terminology for many years. “I’ve been bothered by it all my life,” he said, noting that it also appears in other engineering contexts and even in photography. “I had come to see it as undesirable, but unavoidable.”

But, when Gomez emailed him with the idea to write the letter and asked for his feedback, Giles said he saw the matter in a renewed light.

“The letter reminded me I should have been more outraged by it,” Giles said. “Continuing encounters with an irritation can make you build up a callus. I had built up a callus for this language that I wish I hadn’t built up.”

“Historically, [the terminology] has been used pretty widely,” Giles added. “Its [appearance in the Pearson textbook is] not an exotic or unusual use of the term. It has always been very striking to me. In most of my courses, I try not to use [the master/slave terminology]. I’ll use boss/worker or main/subsidiary or something like that.”

When he read Gomez’s letter, Giles found it eloquent. “I was struck by the sincerity and energy of a student coming to this issue for the first time, and at the time we are in, where a large fraction of the country is ready to address racism,” he said. “I thought, this language can easily be changed. I could not have had the insight he had about how it impacted students.”

Giles forwarded the letter to a contact at Pearson on June 19 and it quickly rose up the chain of command to one of the company’s vice presidents. On June 26, Pearson responded with the pledge to pull the book, revise the text, and do the same for any other Pearson publication where the terminology may appear, and review its policies on the matter.

Gomez—who in 2014 earned a bachelor’s degree in sociology from BU and recently enrolled in the BU College of Engineering’s Late Entry Accelerated Program, which offers master’s degrees in engineering to students with non-engineering backgrounds—said that while the language has offended him since he first encountered it in mid-February, the national movement sparked by George Floyd’s killing prompted his action.

“Nothing would have changed if not for the events of the past couple of months,” he said. “I hope this will change the editorial policy [at Pearson] and everywhere else [this language is currently used]. The broader goal is to get other publishers to address this as well, and, even more broadly, to get [the field of] engineering to be antiracist.”

Gomez and Giles had a follow-up phone call with Pearson on July 8. “The conversation went well,” Gomez said. “I am pleased with the expediency and genuineness of their response. They are actively working with their authors to revise the textbooks. They have also reached out to the Institute of Electrical and Electronics Engineers and the Association for Computing Machinery about this issue.”

Duncanson lauded Pearson’s quick decision, but noted that the terminology pervades the engineering field beyond academia. “This is the foundation of our engineering language,” she said. “This is propagated throughout our field. The people who are building the field are building it on what is a racist idea. It’s really great that the voice of a student was able to speak so loudly and create a new language for the field.”

This story, which originally appeared on BU Engineering news, was adapted for style and clarity.

Striking Out Racist Terminology in Engineering

There are 27 comments on Striking Out Racist Terminology in Engineering