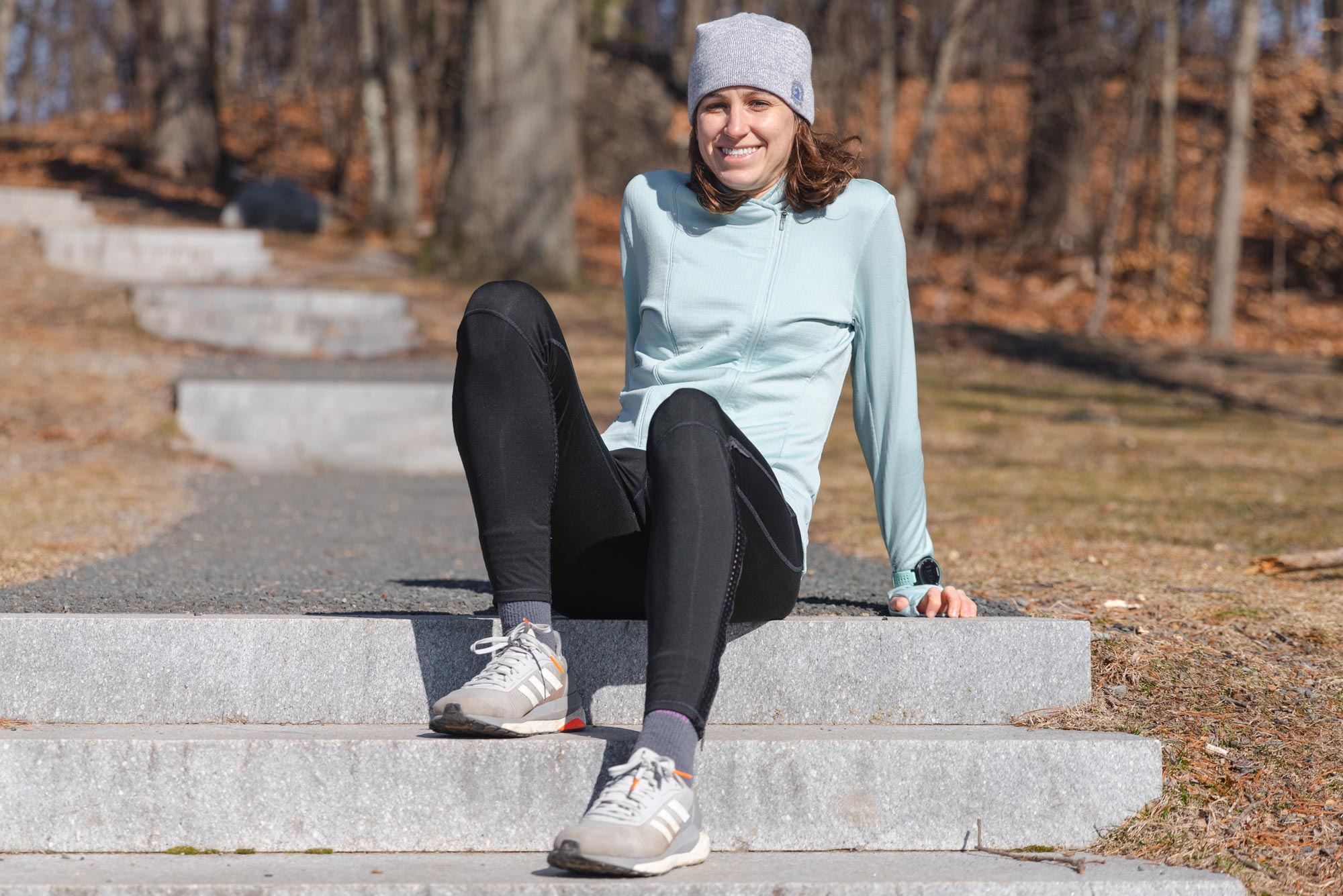 Elite marathon runner Katie Kellner (SPH’19) lives and trains in Boston. On February 29, she’ll compete against the best marathoners in the country at the 2020 US Olympic marathon trials in Atlanta. Photo by Jacob Chang-Rascle (COM’22)

Overcoming injury and anxiety, Katie Kellner will compete in the US Olympic marathon trials Saturday

Boston loves its professional athletes. We’re simultaneously awaiting news of Tom Brady’s future, mourning the departure of Mookie Betts, and anticipating long Celtics and Bruins playoff runs. But professional distance runners? Unless they’re winning the Boston Marathon, they don’t typically attract a spotlight. So Katie Kellner was surprised when on one of her first days at BU, a School of Public Health classmate approached her. “I hope this doesn’t sound weird, but are you Katie Kellner, like, the runner?” she asked.

The woman had just watched the 2016 US Olympic marathon trials, one of American distance running’s most high-level events. Kellner had competed with one of the top US teams, Hansons-Brooks Original Distance Project, and had placed 28th out of 159 finishers.

After that race, Kellner (SPH’19) decided to leave behind the opportunity to be a full-time athlete and return to school (she did her undergraduate work at Cornell). In Boston she enrolled in SPH and joined the Boston Athletic Association’s racing team. Four years later, she’s earned a master’s, begun searching for a job in biostatistics, and is preparing for the 2020 Olympic Team Trials—Marathon. The top three finishers in that race, to be held this Saturday, February 29, in Atlanta, will head to Tokyo this summer to compete in the 2020 Summer Olympics.

Kellner’s running career began 17 years ago in West Windsor, N.J. Her parents urged her to find an after-school activity, and she chose cross country. “I loved it from day one,” she says. “The first practice, we ran a time trial and I beat all the girls and all the boys, and I thought, OK—this is fun.”

She was one of the best high school runners in the country as a senior, placing 27th in the cross country national championship, and then spent the next four years competing for Cornell, earning All-America honors three times. “She was one of the all-time greats at Cornell,” says Artie Smith, her college coach. “If you follow basketball, there’s this thing with Michael Jordan and Magic Johnson and Larry Bird: they always went into the off-season working on some small part of their game. That’s how Katie was.”

As Kellner neared graduation in 2013, she thought about applying to medical school, but decided to put her academics on hold and pursue a professional running career first. She joined the Hansons, a Michigan-based professional team known for developing marathoners, and began training full-time for the 2016 Olympic trials.

To compete in the trials, athletes must qualify with a marathon (2:45 for women in 2020) or half marathon time (1:13 for women in 2020). Kellner ran a half marathon qualifier, which meant the trials were actually her marathon debut. On a hot day in Los Angeles, she ran perfectly, pacing herself as other athletes went out too fast and faded. She finished in 2:43:41, 28th out of 149 finishers. That’s an average of 6 minutes and 14 seconds per mile, for 26.2 miles. Her teammate Desiree Linden finished second and qualified for the US Olympic team.

For Kellner, running has been much more than a job or an elite pursuit—it’s also an escape. “I feel very in the moment when I’m running,” she says. “I’m not focused on the future, not focused on the past, just very much in flow with what I’m doing. There’s a lot of happiness that you get from that.”

The past two years have been filled with challenges, though. Kellner tore her plantar fascia in 2018, then just as she was recovering, broke her left clavicle and right hand in a bike accident. She’s also experienced some triumphs. In 2017, she ran her second marathon, a 2:41:07 personal best at the California International Marathon in Sacramento, to qualify for this year’s Olympic trials. And in 2018, Kellner watched on Boylston Street as her former teammate and friend Linden won the Boston Marathon. “I definitely cried,” she says. “I was so excited for her.”

Kellner had plans to run Boston last year, but when she began experiencing panic attacks, she had to withdraw. “I’ve always had some anxiety,” she says, but this was the first time it had impacted her life, including her running. The physical effects of strenuous exercise—shortness of breath and rapid heart rate—matched the symptoms of her panic attacks, making it hard to complete workouts. “When I got a panic attack outside of running, it started in the mind and then became physical, and when I was running it would be a similar physical sensation, which would then get in my head,” Kellner says. She eased back on her training and didn’t race for the year.

The experience has given her a new appreciation for running. “Because it felt like it was being taken away from me,” she says, “it made me realize how much that means to me, how much it adds to my life,” By fall, she had regained her confidence and began thinking about the Olympic trials again.

And 2019 wasn’t without a running-related headline for Kellner: on September 24, in the middle of an eight-mile run, she saw a dog leap into the Chestnut Hill Reservoir. She watched its owner swim after it, and when the man began to struggle, she reacted. “The second I heard him scream, I took off my shoes and was in the water,” she says. Although she’d never been a lifeguard, she was able to reach the man and haul him back to land. “He was very tired and it was pretty much deadweight,” she says.

Back on the big stage

Kellner feels good about her training, which peaked with a 112-mile week earlier this winter. She spent some time back in Michigan training with an old teammate, and even made time for an annual tradition—a ski vacation with her family. Although she often runs twice a day, the ski trip meant one early-morning treadmill run each day, followed by an afternoon on the slopes. She even returned to racing, placing fifth in the Miami Half Marathon on February 9.

More than 500 women have qualified for this year’s Olympic trials, an all-time record. Placing in the top three and earning a spot on the Olympic team is a long shot. Kellner’s qualifying time ranks her 163rd in the field, and even though she’s unlikely to contend with Linden and the other favorites, who have run in the low 2:20s, she is excited to compete on this stage again. “I don’t have a specific time that I’m trying to hit, but I want to go there and have fun,” she says, “and make sure that at the end I’m still trying to race people in those last couple miles and not just hanging on for dear life.”

The US Olympic Team Trials–Marathon for women and men will be broadcast live from noon to 3 pm EST on Saturday, February 29, on NBC.

SPH Alum Is Chasing Her Olympic Dream
0
share this