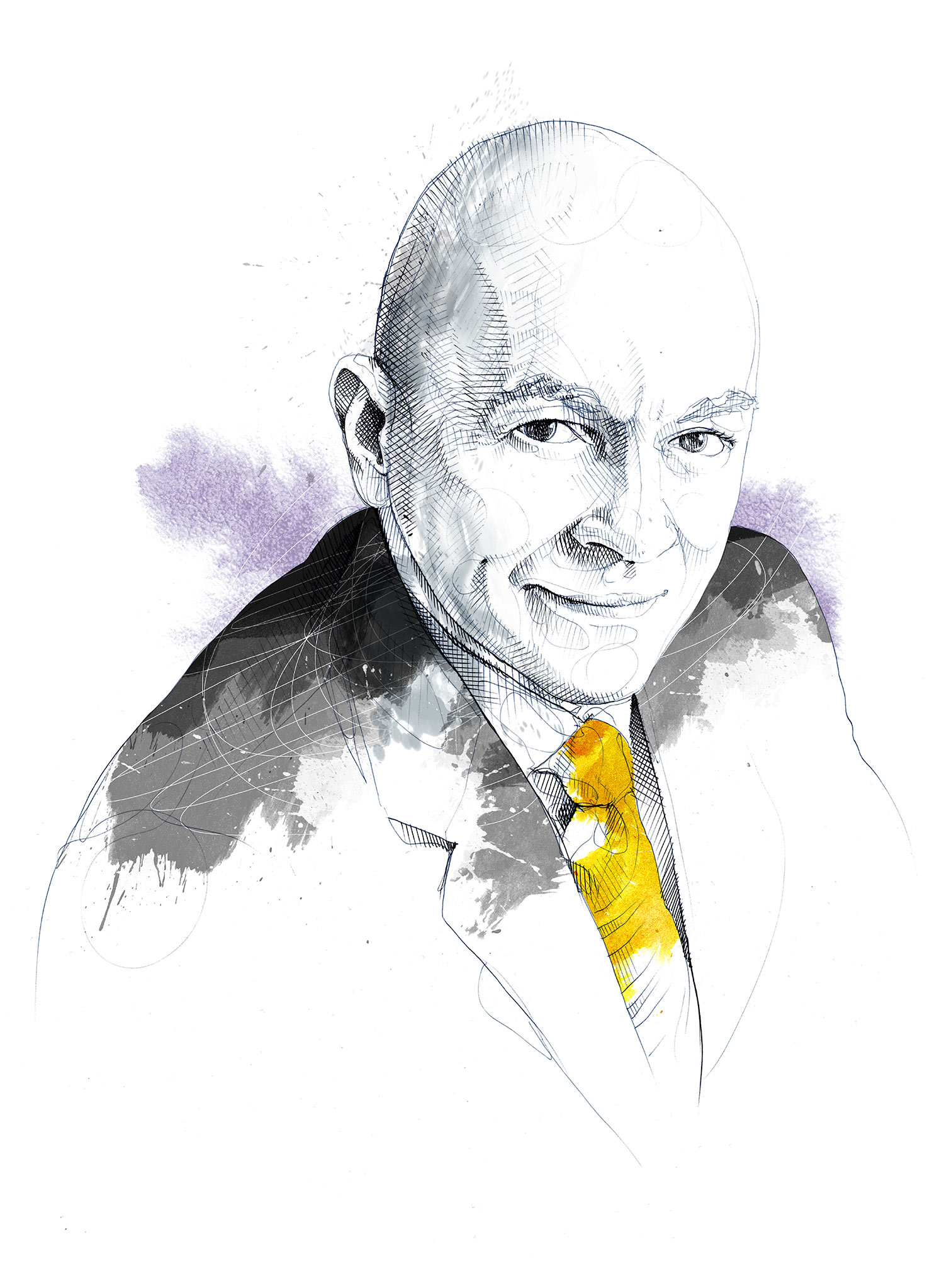 Financial industry pioneer Mark Mobius’ approach to business is infused with skills he learned onstage. If a television reporter offers to show him questions in advance, he turns them down, preferring to improvise as his CFA acting professors taught him. Illustration by David Despau

The Art of Investing

Mark Mobius trained as an actor and a musician, but made his name in finance as an emerging markets guru

Mark Mobius sailed past the official retirement age decades ago, but still spends so much time jetting across the globe for work that he reportedly carries two passports.

A financial industry pioneer, Mobius, 83, has a home in Singapore, but he spends the majority of his year visiting the countries and companies he’s looking to invest in. When he spoke with us, Mobius had just landed in Turkey from India; after we spoke, he was heading off to Dubai, then Singapore, then Sri Lanka, then back to India.

“You’re just constantly learning,” he says of his globetrotting. “I enjoy so much going to these countries and learning how things change.”

Mobius (CFA’58, COM’59) has never been married—except, he often says, to his work. In 2010, he joked with financial newspaper City A.M. that if he had married, “I’d probably be divorced by now because of all the traveling I do.” When the New York Times interviewed Mobius in 1993, the reporter asked when he last took a vacation. “I don’t take any,” he said, “because my vocation is my avocation.”

Since the mid-1980s, Mobius’ vocation has been investing in emerging markets. When individuals entrust their money to a mutual fund, he puts their pooled capital into companies and stocks in countries like Brazil and China, with the goal of turning a healthy profit for the fund.

Today, he’s a founding partner of Mobius Capital Partners, managing two emerging markets funds and investing millions in mid-sized companies throughout the world. “The amount we’re investing is only $160 million,” says Mobius. The “only” isn’t a humble brag; in Mobius’ previous job, the numbers were eye-popping. As executive chairman of Franklin Templeton’s emerging markets group, which he led for close to 30 years, he reportedly oversaw investments worth $50 billion—a figure that eclipses the GDP of most countries.

But Mobius wasn’t always a financial industry whiz. Before becoming a world traveler, he cycled through a range of professions—including nightclub pianist.

Life was starkly different for Mobius when he came to the College of Fine Arts in the mid-1950s. Back then, he was a struggling artist, relying on a scholarship and working a series of jobs to pay his way through a dramatic arts degree. He waited tables and played piano at a nightclub. Both of his parents were immigrants—his father from Germany, his mother from Puerto Rico. “The family didn’t have very much money,” Mobius says. At the time, he wasn’t quite sure where his college studies would lead him—only that he enjoyed them.

“I really didn’t know what I wanted to do, where I wanted to go,” he says. “But I knew I liked the theater, art, music.”

As he got deeper into his degree, his work on the stage sparked an interest in how people think and behave in the presence of others. Hungry to explore that, after CFA, he studied the psychology of communications at BU’s College of Communication.

“Once you learn about theater, about art,” he says, “you realize it’s all about the psychology of the audience as well.”

It’s a lesson he’s applied to the financial world—and not just when making presentations. Mobius says many investors are too fixated on balance sheets and forget about the people behind them, the personalities running a business. While others sit entrenched in swanky corner offices, he likes to get on the ground to explore the social psychology of countries and see what motivates company leaders.

“These people have certain backgrounds, certain likes, dislikes, certain abilities. And if you want to be successful, you’ve got to learn about these people, because they’re the ones who will be running the company and the money that you’ve invested in them,” he says. “When you’re in the theater, you have to learn about human behavior—action, reaction—and how people think and behave as a result of that thinking.”

Mobius’ approach to business is infused with skills learned onstage. If a television reporter offers to show him questions in advance, he turns them down, preferring to improvise as his CFA acting professors taught him. “This is where we learned how to be innovative and creative,” he says. And if he’s thrown an unexpected or embarrassing question, he remains unruffled. “Although theater and acting is an emotional thing,” he says, “it’s less about reacting emotionally; you learn how to control your emotions.”

After BU, Mobius’ peripatetic path continued to weave in unexpected directions. He studied in Japan and earned a PhD in economics and political science from MIT, but still didn’t have a firm idea of what he should do with his life.

“It was a consultant who sat me down and said, ‘Write the five things that you enjoyed the most in your life—don’t limit it to adult things,’” says Mobius. “That focused my mind about what direction I wanted to go in. I think young people should do that, they should analyze what they really enjoy; if you really enjoy something, you can do much better at it—and probably make a lot of money doing it.”

The first three things on Mobius’ list were traveling, learning new things, and working with others.

He says it led him into a research career and to Asia. Mobius worked as a survey and product researcher and consultant in Japan, South Korea, Thailand, and Hong Kong. When a client asked him to study the stock exchange, he was hooked. “That’s really the beginning of my interest in investment and the stock market,” he says. By the 1980s, he’d shifted into conducting research on emerging markets for the brokerage firms that connect buyers and sellers in the stock market.

When you’re in the theater, you have to learn about human behavior—action, reaction—and how people think and behave as a result of that thinking.

In 1987, his work caught the attention of Sir John Templeton, a visionary stock investor. Templeton was making a foray into emerging markets and asked Mobius to run a new fund, one of the first of its kind. Mobius started with $100 million invested in six countries. Today, the Templeton Emerging Markets Group, which invests in banks, retailers, and technology companies in countries like China, South Korea, and India, is valued in the billions.

In 2018, when Barron’s looked back on Mobius’ career with Franklin Templeton, it called him prescient, saying he’d unearthed “bargains as some of the world’s poorest countries transformed into economic powerhouses.”

“That was the ideal position for me,” Mobius says of the job, “because I could travel all over the world, learn new things, learn new industries.”

His success at the company, which he left in 2018, earned Mobius a reputation as the father of emerging markets. Bloomberg Markets and Asiamoney named him to their most influential lists, he cochaired a task force for the World Bank and Organisation for Economic Co-operation and Development, and he authored more than a dozen books on investing, mutual funds, and equities. Someone even wrote a manga (a Japanese comic) about him.

As the founding partner of his own firm, which he launched in 2018, Mobius retains a focus on emerging markets. He still gets to travel and has been able to direct his attention to investing in companies that emphasize good corporate governance. Now he doesn’t just look for businesses primed to make a profit, but ones that also treat their employees, shareholders, and communities well. In 2019, he coauthored a book on this investing approach, Invest for Good: A Healthier World and a Wealthier You (Bloomsbury Business).

“The research shows that by having better corporate governance,” he says, “the stock performance is better.”

Every so often, Mobius’ travels bring him back through Boston, and he loves meeting the students treading the CFA boards, just like he did more than 60 years ago.

“A lot of them are like I was in those days: a lot of them really don’t know what they want to do and they’re just feeling their way,” he says. In an age when even computer coding is becoming automated, he says, those studying the arts will have an advantage whatever path they choose—just as he did. “Creativity is about being flexible and being innovative. Learning about creativity in the fine arts really gives you a leg up on any walk of life.”

The Art of Investing