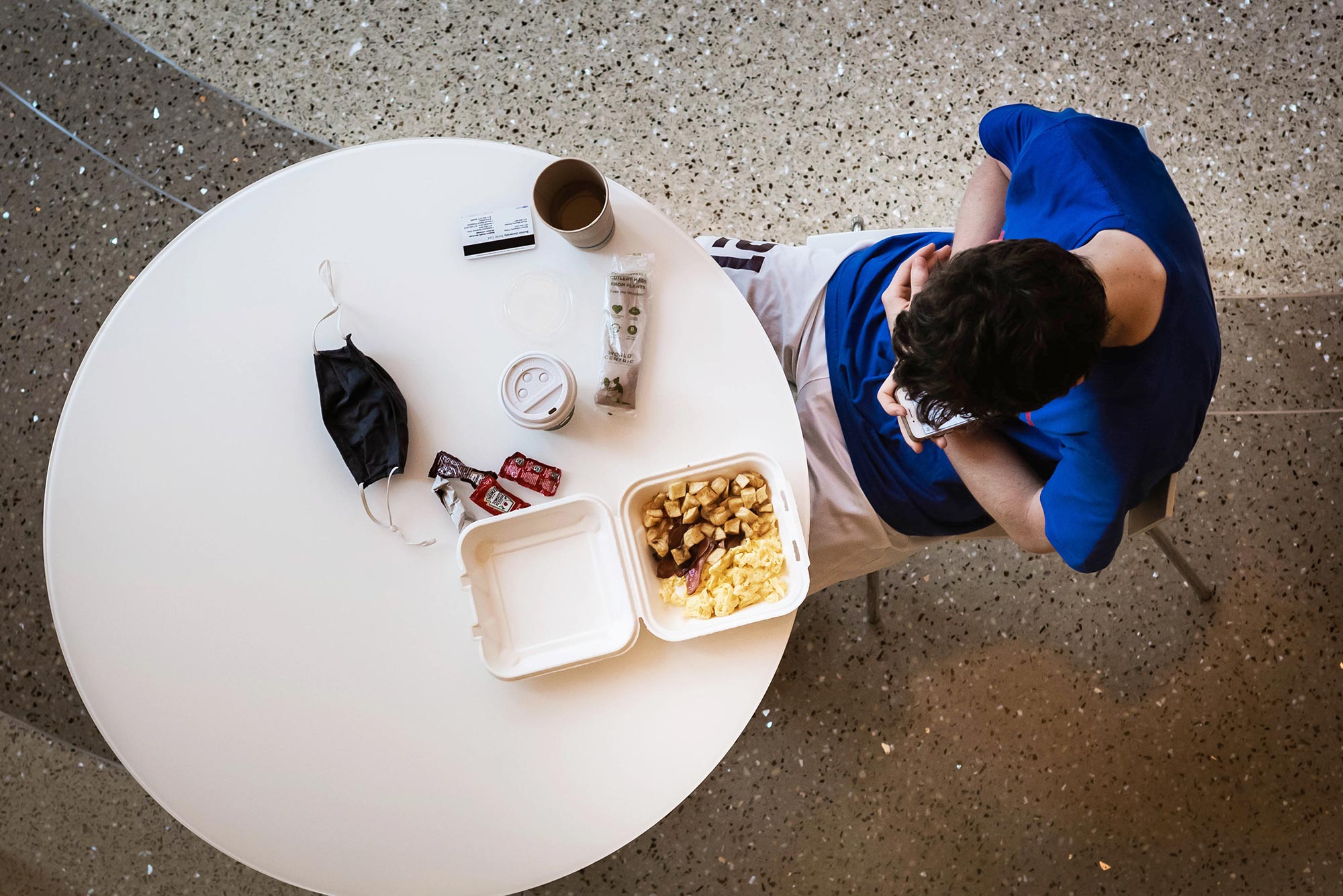 When this year’s freshmen toured and sent their checks in to BU last spring, they were sold on a campus brimming with life, 100 students packed into Metcalf Hall for a lecture, the lazy river at FitRec, statistics like “450 clubs” and “80 study abroad programs.” All of these perks of campus life would be great places to meet people and to gather with a new group of friends, but none of them are possible right now. Photo by Jackie Ricciardi

Students and mental health experts on making friends, being brave: “Everyone is feeling this way, at least a little”

“I’m a first-year student and it really bothers me how lonely I feel sometimes on campus…barely anyone makes an effort to approach one another and try to make friendships. I’ve tried being forward and friendly to people, but I’m just met with indifference and people staring at their phones.”

“BU is a sad and lonely place for a socially anxious person like me. I’m a junior at this school and I almost never hang out with anyone on weekends or go to parties or anything…I don’t feel at home here like it seems for other people.”

“Idk what to tell people when they ask why l don’t have friends…I meet someone, we grab lunch, promise to do it again, and then a week later l see them with their ‘main’ friend group and every time get this little ‘oh’ feeling where it’s clear I’m not the go-to friend.”

These are just a few of dozens of revealing messages about loneliness students posted over the last year on Boston University’s  Reddit and class Facebook pages. The problem, of course, is not BU-specific—the coronavirus pandemic has forced college students across the country to socially isolate, leaving many feeling at least a little, and sometimes more than a little, lonely.

But to college students, especially those new to campus, BU’s aggressive coronavirus safety protocols—no large groups, fewer in-person classes and meetings, and restrictions on the amount of people allowed in an elevator, laundry room, and even around a dining hall table—can equal loneliness. All of those measures, well-intentioned as they are, leave students feeling cooped up in their rooms all day long in front of a laptop or looking fixedly at their phone. With fewer students on campus and fewer chances to interact with others, since many have chosen to study remotely from home, meeting and making new friends has become harder than ever—at a time when everybody could use good friends.

“No one prepares you when you head off to college, they say it’s going to be the best part of your life, but it’s definitely an adjustment,” says Madelyn Gilbert (Sargent’22). “You’re not used to all the downtime. Loneliness is so common. I know people who go to the state school with 80 kids from their grade, and even they’re lonely at times.

Loneliness could really tip someone into mental health distress.

“First years, hang in there, and upperclassmen, look out for the newer students. Everyone has a hard time sometimes.”

In talking to students and health experts, one word emerges as a key to overcoming loneliness during a time of isolation: Brave. Being brave means knocking on a stranger’s door down the hallway for a conversation through masks, sharing over FaceTime with parents just how sad you’re really feeling, messaging a classmate during a Zoom class in search of a mutual connection or bond, or just reaching out to Student Health Services for some support and guidance. That one act of bravery could be the first step toward realizing that this overwhelming feeling of loneliness? It’s not just you. It’s everyone.

Loneliness has plagued Americans for decades. In 2019, before anyone had heard the term COVID-19, the insurance company Cigna conducted a large national survey of adults in this country and found that 61 percent reported feeling lonely, versus 54 percent feeling that way in 2018. While a June 2020 study published by the American Psychological Association found that the pandemic’s social distancing rules did not lead to higher levels of loneliness, other studies show it has resulted in a rise of depression and anxiety across the country.

The Howard Thurman Center for Common Ground has lots to offer, starting with a quiz meant to identify groups that might be a good fit for you to join. They also host Zoom events like an advice segment called Real Talk, the weekly current events discussion Coffee & Conversation, the self-care chat Tea Time, and a book club. Elsewhere, hit up kids in your classes and offer to start a virtual study group. Check out Headspace (BU offers the app free to students) and its free loneliness meditation module. Rush Greek life this spring. Message a club—it’s not too late to join.

Dori Hutchinson (Sargent’86,’95), BU Center for Psychiatric Rehabilitation director of services, says loneliness is a huge concern on campus right now, as everything that would normally bring people together in person is now prohibited or limited. “Loneliness and isolation are often behavioral indicators for people who are really struggling,” she says. “We’re worried collectively about mental health distress and for those who already live with a mental health condition. Many people who have mental health conditions already struggle with depression or anxiety, and here we have this invisible virus floating around. And we’re living in fear of it. So loneliness could really tip someone into mental health distress.”

While physical isolation is one of the ways to keep COVID-19 at bay, it’s very different from social and emotional isolation. Loneliness is a perceived disconnection from others, says Dan Fulford, a Sargent College assistant professor of occupational therapy, and director of its Approach Motivation & Participation Lab, and a College of Arts & Sciences assistant professor of psychological and brain sciences, who studies social and motivational factors in mental illness, including social isolation, loneliness, and motivation. It’s possible, Fulford says, to feel lonely even if you have a robust social life.

Researchers like Fulford are now thinking a bit more about loneliness and what piles on top of it, like other mental health concerns, including feeling sad or anxious. “What’s an open question in the research is, ‘What contributes to what?’ I think there’s a consensus that both contribute to each other reciprocally over time,” he says.

Another chicken or the egg scenario, Fulford points out, is that anxiousness about social situations can lead someone to withdraw (even subconsciously) if they assume they’ll be disappointed or rejected. And this just makes them more lonely.

Advice from people who’ve been there

That fear of rejection is something that Eva Russo (Pardee’21), an Orientation program coordinator, hears about often. Russo, who also leads a section of FY101, an optional one-credit class that serves as an introduction to life at BU, says first-year students this year feel like “they’re meeting a ton of people in classes, in the elevator, at the dining hall, but then they never talk to them again.” They feel the relationship can’t progress one level deeper, because “they can’t hang out in a dorm room together, and the relationship doesn’t last. They feel wary of breaking a safety rule and getting in trouble.”

When this year’s freshmen toured and sent their checks in to BU last spring, they were sold on a campus brimming with life, 100 students packed into Metcalf Hall for a lecture, the lazy river at FitRec, statistics like “450 clubs” and “80 study abroad programs.” Maybe they imagined themselves gathering with a group of new friends on the BU Beach or sitting with the Dog Pound at a men’s hockey game. All of these perks of campus life would be great places to meet people and to gather with a new group of friends, but none of them are possible right now.

Kenneth Elmore (Wheelock’87), associate provost and dean of students, says that every year he hears from a few students (as well as some concerned parents) about their struggles to make friends. But this year, he says, that message carries more weight because of the pandemic.

Elmore says he too feels lonely sometimes. “I feel like there’s incredible anxiety about reconnecting with people or just getting to know people. It’s just harder to encounter someone with a mask on, or from two meters away,” he says. “But I think that means we have to do some work.”

He encourages parents to listen if their kids call to vent about feeling lonely. They may just need to unload, not actually have the problem solved for them.

For students, Elmore says they should recognize that BU’s protocols, while restrictive, are not meant as barriers to engaging with others in person. There is nothing wrong with putting yourself out there, he says, in ways that are safe. “Go physically knock on your next-door neighbor’s or RA’s door and talk to them. Wear a mask, don’t go in their room, but go have a conversation. You can get together in small groups. This is the hard work of building a community for yourself, and it means that you’ve got to do these things that might go against your norm.”

Be honest and tell people if you are having a hard time, because I guarantee others are feeling the same way.

Fulford’s research also delves into how social media use could contribute to loneliness. He says that while scrolling through Instagram and TikTok isn’t harmful to everyone, for others, “social media can absolutely be detrimental to one’s well-being or mental health.” Those most vulnerable to the negative effects of social media may already be predisposed to comparing themselves to others or be critical of themselves. In normal times, it might simply be brushed off as a case of #FOMO, or Fear of Missing Out, but during a pandemic, it can be more serious. “They would potentially feel more lonely as sort of a product of all of that,” he says.

One of the best ways to combat loneliness, Fulford says, is to work at having at least one deeper relationship, a friendship that makes you feel truly understood. It might mean sharing feelings more openly and being willing to listen more intently. “If they feel they’re on the same page, if they feel like they can disclose their history, current experiences, what they’re struggling with, or even happy experiences, that’s important,” he says.

Even as a senior, Russo says, the pandemic has been hard on her social life. She misses making casual conversation with a classmate sitting next to her and feels a bit awkward joining group FaceTime calls and virtual club meetings. She says she got brave and started messaging people in her classes to compliment their shirt or their virtual background—and it paid off. She now has a new study buddy.

She echoes a sentiment that many others share—be brave enough to put yourself out there and make the first move. “Everyone is feeling this way, at least a little,” she says. “Many people are seeking friendship right now to make this all a little more normal. And be honest and tell people if you are having a hard time, because I guarantee others are feeling the same way.”

Dealing with Loneliness in College during a Pandemic
18
share this