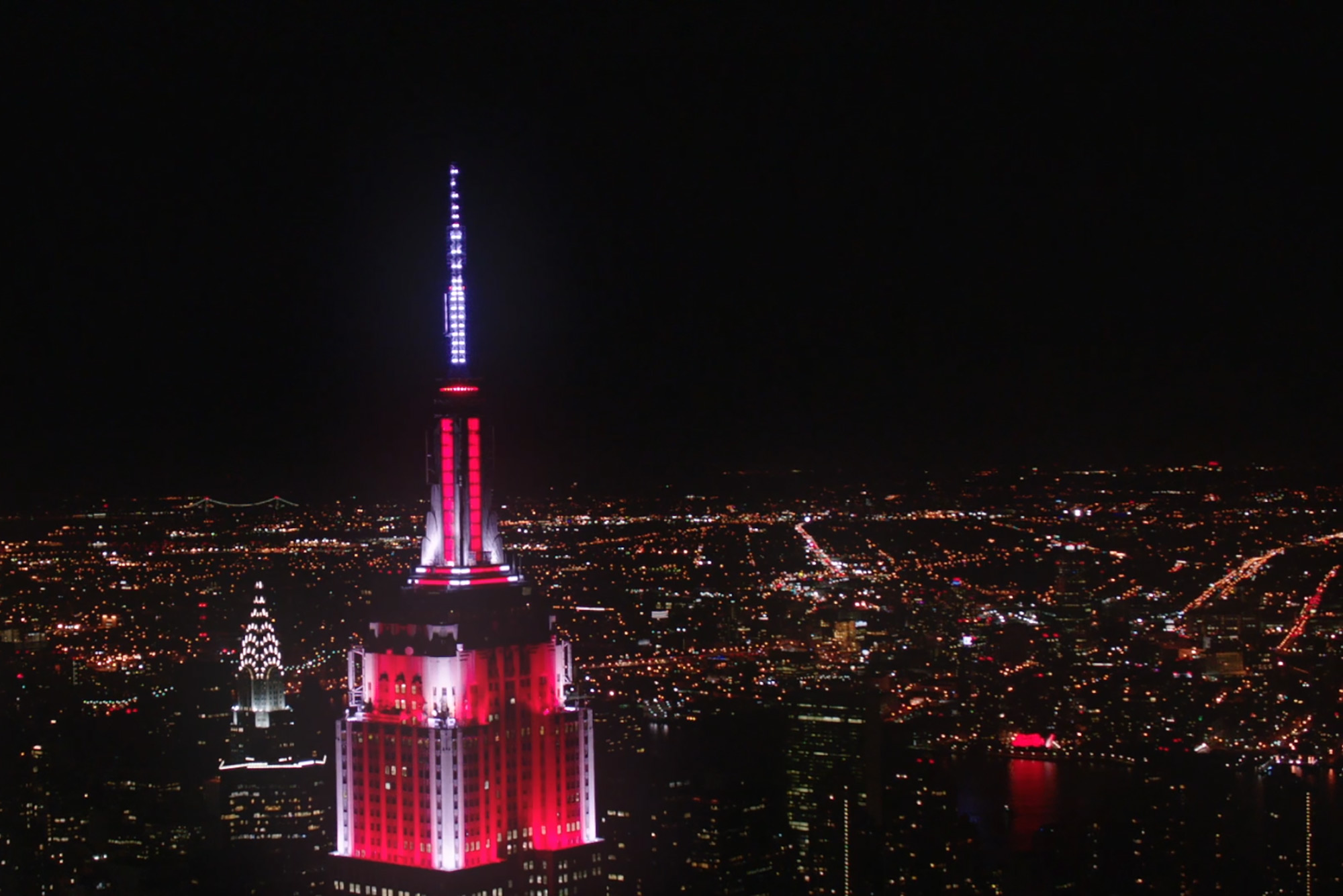 Dietrich Juengling (CFA’96) has designed high-tech lighting for rock bands, movies, and even a theme park, but he’s proudest of his work at the Empire State Building. Photo courtesy of Dietrich Juengling

Lighting designer Dietrich Juengling’s work can be seen in movies, on musical tours, and on the Empire State Building

With his past-the-shoulder hair and goatee, Dietrich Juengling (CFA’96) looks like a rock ’n’ roll guy, and that’s where his career started after high school. “I had some friends that were musicians, and next door there was a rehearsal facility that a lot of bands like Ratt and Great White were going in and out of, and they’d drag us over to push equipment cases. I ended up connecting with the lighting designer for one of the bands, and he put me on the follow spot. And I thought, this is fantastic.”

That led to a career as a lighting designer that took him on tour with Yanni, Hans Zimmer, members of Pink Floyd, and others. He designed the lighting for the Universal Studios Japan theme park in Osaka, and his work for the movies includes the light-up dance floor in Boogie Nights.

Now the Southern California native sits in his home office just north of Dallas, surrounded by a dozen monitors and a handful of laptops, designing and running light shows for live events, architectural installations, and art pieces around the world for his longtime employer, Tactical Manoeuvre, Inc., an LA-based art and design collective led by Marc Brickman.

Tactical Manoeuvre has been running the light shows on the 102-story Empire State Building for nearly a decade, beginning in 2012 with an abstract colors and rhythms show set to Alicia Keys’ “Empire State of Mind.”

“It’s hard to describe the feeling,” Juengling says. “I remember our first show there, when we were in there with a temporary system, trying to decide what worked best. And they had us on the 72nd floor, which had been gutted to rebuild for a new tenant. So it was just a shell. I could see out all the windows all the way around me, and I was running the show and had music blasting all over the place and the lights were illuminating the entire floor—that was almost magical. It was really wild.”

Recently the company has done shows on the building honoring New York’s first responders and medical personnel during the pandemic. The shows were played at midnight. “The goal was to keep it upbeat, give hope, and maybe allow them a chance to slip away for a minute,” Juengling says.

He’s had plenty of other thrills along the way. Reimagining the look of Pink Floyd’s classic The Wall for a David Gilmour tour in 2010, for example, then designing tour lighting for Gilmour’s former bandmate Roger Waters in 2015. An Asia swing with Yanni in 1997 brought him eye-opening experiences at the Taj Mahal and Beijing’s Forbidden City.

“Being in the Forbidden City was wild and frightening at the same time,” he says. “We had some experiences with the military that were not fun. We had built a large scaffolding tower with a camera on top, and one of the guys turned the camera around toward Tiananmen Square, and they were not partial to that at all. The guns came out, and a $70,000 camera goes flying off the tower.”

Juengling had been lighting rock shows for a few years when Roger Meeker, now retired but then a CFA assistant professor and the School of Theatre’s associate director of design and production, came to LA recruiting students in the 1990s. “I was bright-eyed and bushy-tailed and told him I wanted to light the world,” Juengling says. He left BU with bachelor’s and master’s degrees in theater, but acting was not his thing: “I’ve never been a person who wants to be in front of the camera.”

The business has changed a lot since he started. Shows are “previsualized” on computers instead of planned from scratch on-site. No one has to climb a ladder into the rigging or venture out onto a ledge of a building to change the color of a spotlight anymore. The Empire State Building has 11,000 Philips LEDs permanently installed on its exterior, all controlled digitally. It’s less labor-intensive and more energy efficient.

Still, for Juengling, the Empire State Building is, no joke, the highlight.

New Yorkers “all have a really strong tie to this building,” he says. “It’s a beacon of sorts up in the sky. The heartfelt stories of some of these people and what it means to them, that has impacted me a lot. It goes back to the comment I made to Roger about lighting the world. I feel like that’s something I’ve done a pretty good job at succeeding with.”