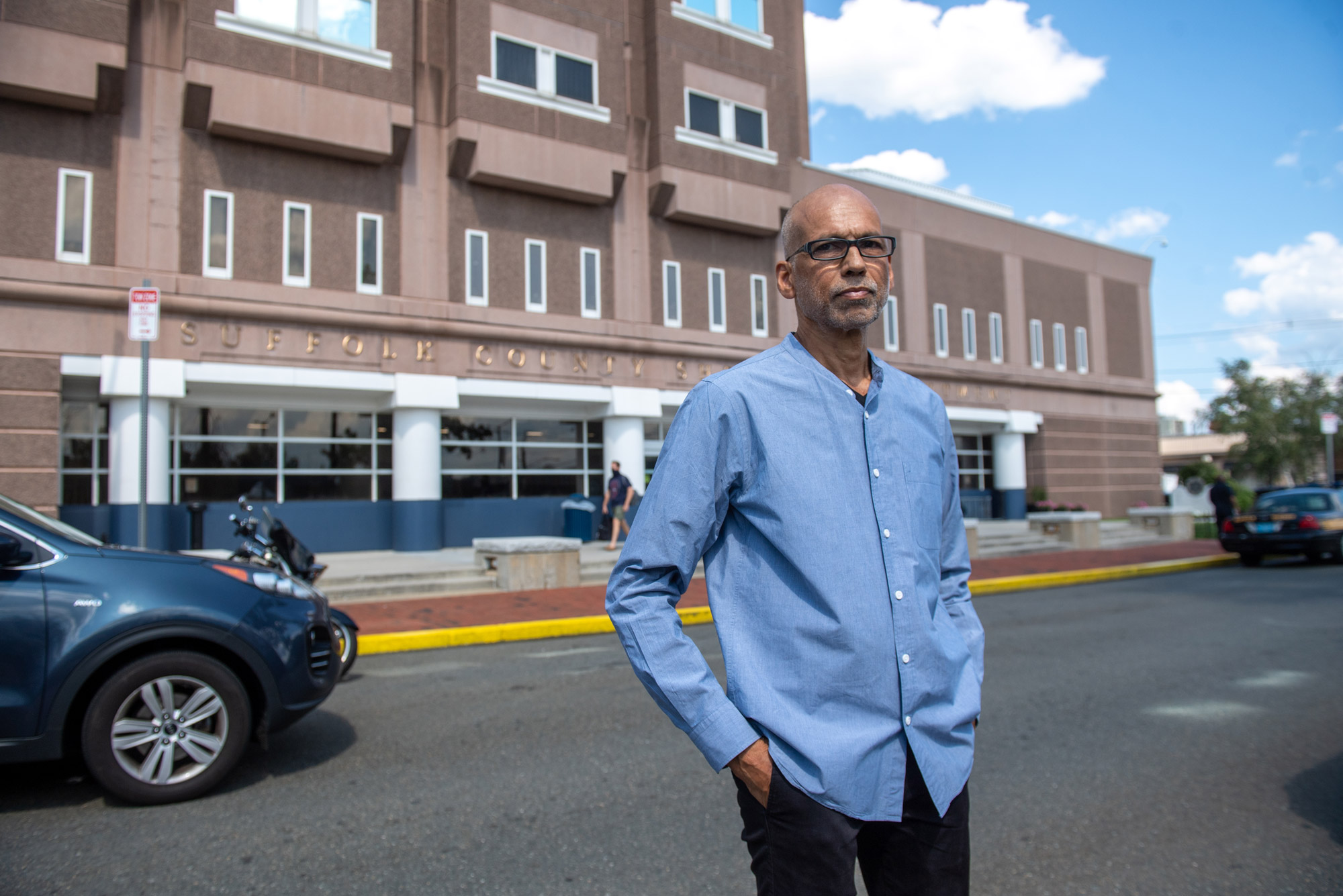 Working around the constraints of the pandemic, André de Quadros is bringing music and the creative arts to incarcerated persons

André de Quadros, standing outside the Suffolk County Sheriff’s Department, teaches music to underserved populations to create space that he says is centered on “empowerment, personal expression, and community.” Photo by Cydney Scott

During the summer months, BU Today is revisiting some of the past year’s favorite stories. This week, we feature alumni, faculty, and student profiles.

Music, with its profound and complex effects on the human brain—from reducing symptoms of pain and depression to lowering blood pressure and stress levels—can have powerful and transformative effects on the lives of people, including those who are the most marginalized. As choral and orchestral conductor André de Quadros has seen, in places ranging from prisons to refugee sites to war-torn conflict zones, music can have astonishing impacts on people and communities who are given the chance to be creative.

“Music, like everything else, can bring people together or keep them apart,” says de Quadros, a Boston University College of Fine Arts professor of music and music education. “People have used [music] as a feature of war and as a feature of peace….Music has so much power because it can be in companion with all kinds of agendas.”

For nearly a decade, de Quadros has taught art and music courses in BU’s Prison Education Program, where he has worked with many men and women in facilities based in Massachusetts. But the global coronavirus pandemic has made teaching incarcerated women, men, and youth nearly impossible. As the number of coronavirus cases in jails and prisons has climbed, hitting an all-time high in early August, the virus has called for de Quadros to employ creative work-arounds in order for music-making to continue.

“Technology once again favors the privileged,” de Quadros says. “If you are a person who is already marginalized, and because of that you end up in prison, now your education opportunities are being taken away or harmed by the current realities of the pandemic.”

In the time of the pandemic, de Quadros and other BU faculty members, including CFA faculty Judy Braha and Dana Clancy, are piloting a digital approach for the Suffolk County House of Corrections. Their hope is for incarcerated people to continue their arts education pursuits, albeit remotely, during the pandemic. Until it becomes safe to teach in person, they and BU music students are sending video prompts, along with written assignments to students in prison. The assignments are writing-based, since video recording isn’t feasible in prison settings with limited access to technology and resources. At Nashua Street Jail, in downtown Boston, de Quadros and other CFA faculty recently received approval to give lessons via Zoom starting in September.

“People in prison are routinely and systemically deprived of their basic rights,” says de Quadros. “Although art-making and human interaction in the same physical space is profound, we are building a bold and innovative interaction with the use of technology.”

For most of his life, de Quadros has been immersed in making and conducting music. After first learning the violin at the age of four while growing up in Bombay, India, he has since gone on to lead musical ensembles and undertake research in over 40 countries—he is fluent in 10 different languages—with a focus on using the power of communal music as a means of empowerment and expression. But he has given particularly close attention to American prisons, a system long plagued by racial disparities, with Black and Hispanic inmates consistently outnumbering white inmates. With community music in prisons becoming increasingly common, evidence has shown that choral singing can lead to successful reentry into society.

“We’re not going [to prisons] to teach songs or to get [inmates] to sing in tune and on time….That is not the purpose [of our work], because they are subjected to discipline all the time,” says de Quadros. “Creating a space for them to express themselves meaningfully through poetry, songwriting, visual art, storytelling of different kinds is the central purpose….It’s about empowerment, personal expression, and community, within a context that is highly racialized.”

Around the same time as he began teaching in the BU prison program, de Quadros and his collaborator Emily Howe (who is currently a PhD student at BU and an assistant professor at Curry College), developed a teaching approach called Empowering Song, which was influenced by de Quadros’ fieldwork and interviews with prisoners in Thailand, South Africa, Germany, Indonesia, and the United States. It’s a technique centered on singing, movement, and improvisation and collaboration, hinging on the participants’ ability to be vulnerable and open—something often difficult to achieve within the conditions of jail. The method has proven effective in helping prisoners be open to creative endeavors and music-making in certain contexts.

In a 2018 paper, “Identity, Belonging and Struggle: Mobilizing Community and Transforming Individuals through Music,” de Quadros explored how interactions through music can defuse tensions and symbolically remove political barriers between people. For the paper, he drew from his experiences teaching in prisons and the time he spent leading choral groups in various Middle Eastern countries, including his work on the Arab Choral Festival, which he helped develop alongside local leaders in Jordan. The festival brought together community choirs from Iraq, Jordan, Lebanon, Palestine, and Syria during the height of the Iraq War, when borders of those countries were deeply contested. Today, he still recalls being struck by the connections people made in the ensemble, in sharing a common identity amidst the tensions of war.

“I didn’t even have to interview them to understand the way they spoke about their shared Arab identities, because I observed it in the way they sang and made music together,” de Quadros says. In the paper, he also described how one of his students who was incarcerated in a Massachusetts prison talked about the experience of learning music: “When someone spends their entire life creating walls that they believe will protect them, the idea that perhaps they no longer need to stand behind these walls is not only a foreign concept, but it’s also revolutionary…”

That idea, however, does not happen organically or magically, de Quadros says. He turns back to the guiding question: “Who am I as an educator? What vocabularies, what processes, what concepts allow me to promote community, expression, nonviolence, reconciliation, and things that are important to my human values?”

Then, he channels his energy into how best to share the power of music with his students.