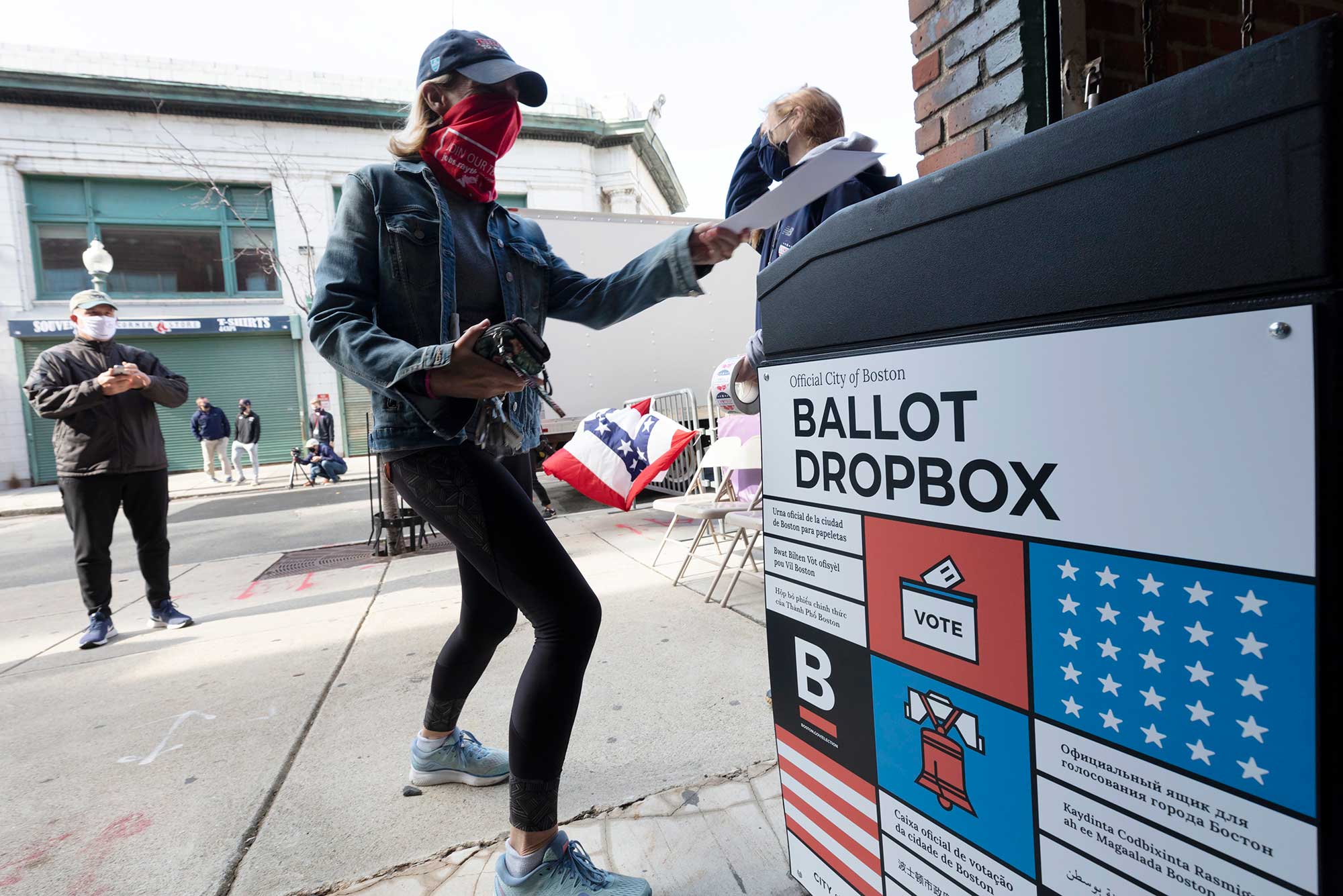 A woman placing her ballot in a dropbox after voting at Fenway Park, Saturday, October 17, 2020. AP Photo/Michael Dwyer

BU Historian: 2020 Presidential Election a “Momentous Episode in the Story of American Democracy”

The spectacle of regular elections, despite disease and discontent, offers “glimmer of light” in dark times

A century and a half ago, amid the Civil War, President Abraham Lincoln asserted the necessity, and celebrated the heroism, of a democracy “strong enough to maintain its own existence in great emergencies.” Turnout reached 74 percent in that wartime election, aided by innovation: the mail-in ballots by Union Army soldiers. In 2020, the nation once again met crisis—the deadliest pandemic in a century—with a combination of resolve and invention. Fueled by an unprecedented accumulation of early, absentee, and mail-in votes, Americans turned out at a rate not seen in more than a century.

At this writing (the morning of Wednesday, November 4), the outcome of the 2020 presidential election remains in doubt: former Vice President Joe Biden, the Democratic party nominee, holds a slight lead, but President Donald Trump retains a narrow possibility of reelection. Contested under the shadow of the coronavirus, which infected even one of the presidential candidates, the 2020 campaign set modern records for spending and for participation. In a deeply divided nation, with little space for consensus, nearly every observer has depicted 2020 as a historic crossroads for the United States. The campaign, according to Trump, marks “the most important election in US history.” According to his opponent, it represents nothing less than a contest for the soul of the nation, a struggle over whether democracy, decency, and even reason itself can long endure.

Three Democratic women with BU ties won reelection to Congress on Tuesday, two of them members of the high-profile “Squad” of young progressive women who have been a frequent target of President Donald Trump, while two hopefuls lost their races.

But what does it mean to mark an election as “historic”? Since the founding of the republic, a handful of presidential contests—1800, 1860, 1896—have, like this year’s, seemed to the people who waged them to be decisive tests for the nation. Sometimes those predictions panned out; other times not. In 1896, for example, even sober commentators like the august Saturday Review of London labeled the campaign “an event of profound historical significance from every point of view, political, social, ethical, international.” Firebombs exploded on election eve, and unruly mobs clogged city streets from Boston to San Francisco. Yet while the contest certainly mattered, nobody remembers it, in the Saturday Review’s words, as among “the great epoch-making occurrences” like “the French Revolution.”

On the other hand, some historic elections snuck up on candidates and voters; they did not seem particularly momentous during the campaign, but their results profoundly altered the stream of US history. The contested elections of 1824, 1876, and 2000 fit that bill. Still others become “historic” only long after the fact because they initiated long-term trends. At the time, 1936 looked ho-hum—the landslide reelection of a popular president. Decades later, historians see in it the birth of the liberal New Deal coalition that structured American politics for the next 40 years.

Whatever the final tally and the long-term impact of 2020, the scale of the contest (a record popular vote exceeding 150 million), the crisis conditions under which Americans decided it, and the innovative ways they voted will make it a momentous episode in the story of American democracy. “We can not have free government without elections,” Lincoln reminded his countrymen during a mortal threat to the nation. Even in times as dark as Lincoln’s, or our own, the spectacle of regular elections, on schedule, despite disease, depression, and discontent, must offer some glimmer of light—some hope that government of the people, by the people, for the people, shall not perish from the earth.

Election 2020: A Day of Nervousness Turns to a Night of Uncertainty