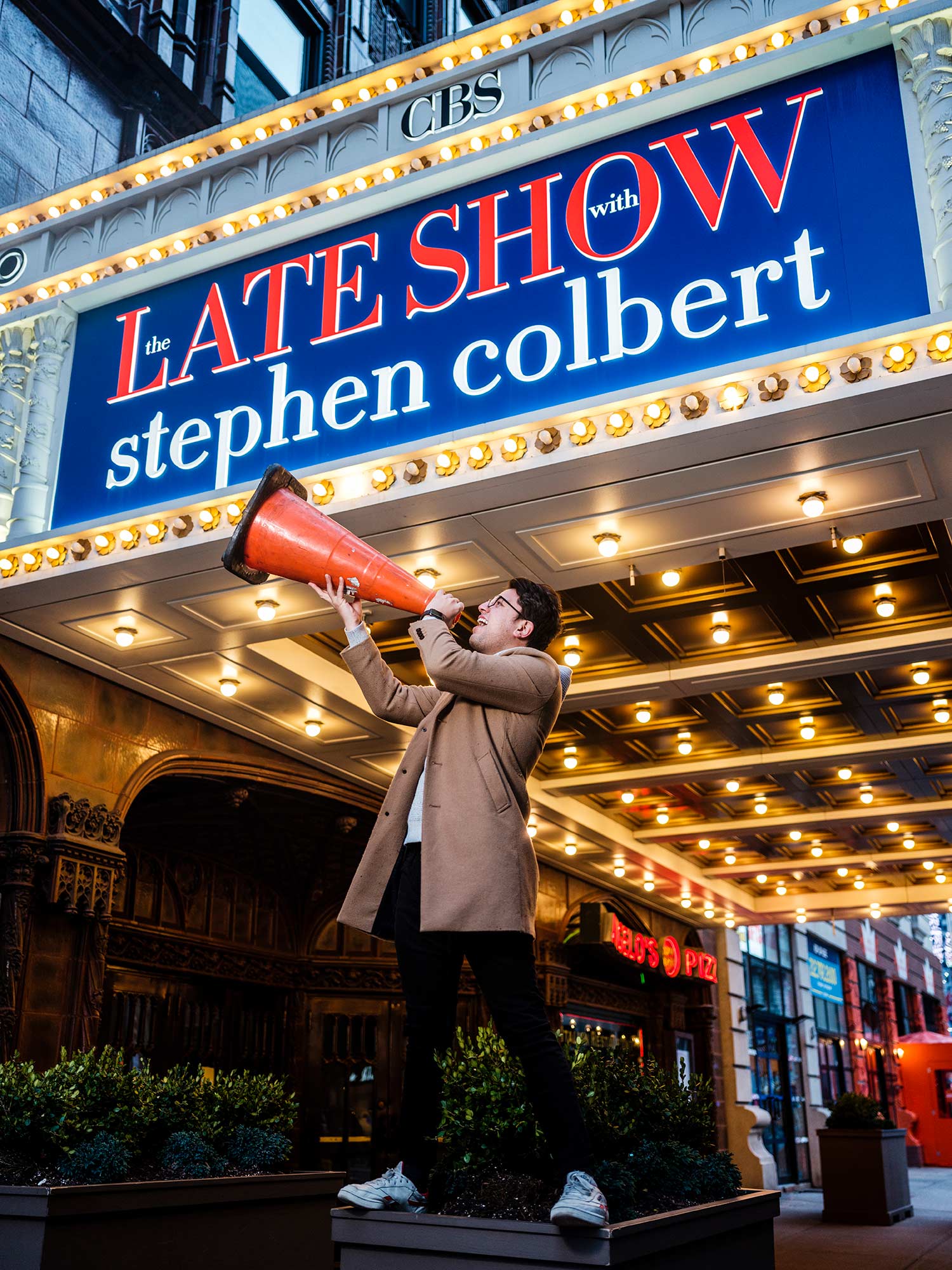 Felipe Torres Medina, a staff writer for The Late Show with Stephen Colbert, says political humor “is a healthy way to challenge the structures of power that are around us without having to harm anyone.” Photo by Chris Sorensen

Late-night talk show hosts appear to reel off their monologues and perform sketches with such ease, it’s easy to forget that a team of writers worked on the script. Colombia native Felipe Torres Medina (COM’15) is one such writer, contributing to The Late Show with Stephen Colbert’s laugh-out-loud moments since he joined the show in 2019. His award-winning work has also been published in the New Yorker, BuzzFeed, and McSweeney’s. When he isn’t writing for Colbert, Torres Medina writes and performs stand-up at the Upright Citizens Brigade Theatre.

We spoke with Torres Medina about his experience as a staff writer for the number-one late-night show, life in his native Colombia, what he finds funny, and how humor helps us make sense of politics.

Bostonia: What draws you to comedy writing?

Felipe Torres Medina: There’s no other way to understand the chaos and absurdity that rules our lives. Donald Trump is president, hence nothing makes sense. Having grown up in a country that is dysfunctional, where things should not be as they are, it’s always been a thing for me to poke fun at the absurd. Ever since I was a kid, I would do impressions of politicians. I didn’t know what they were talking about, but I knew that they spoke funny and people laughed when I tried to speak like them.

Bostonia: It must have been a dream to become a writer for a show like The Late Show.

With Felipe Torres Medina: Yes, it’s a dream come true. It’s a huge production and a very fun environment, but at the same time I do feel like it’s a responsibility. I feel very privileged to be where I am.

Bostonia: Why do you think that people have such an appetite for political humor?

With Felipe Torres Medina: I think the basic instinct of laughing at those in power is very human. Punching up, to ridicule the decisions that people in power make, is sometimes the only way we can call them out. Laughter is so much like crying—it’s an emotional release in which you’re expressing your vulnerability. We’re saying, yeah, this made me feel something. Creating a space where you can say, “What’s happening is so bad, why don’t we just laugh about it?” is a healthy way to challenge the structures of power that are around us without having to harm anyone.

Bostonia: Stephen Colbert ties his humor to politics—even building a past show around a fake partisan persona. Is there a particular emphasis on politics in the writers’ room?

Felipe Torres Medina: We’re a show that talks about what’s happening and what we think people care about that day. So, we can be political. But we also do silly stuff for the sake of doing silly stuff. In this political moment, it’s important that we talk about things that are political, but it’s never a guiding principle.

Bostonia: When real-world politics get crazier or more emotional, do you think it’s harder or easier to laugh at?

Felipe Torres Medina: I came from a country where a disrespect for political structures was already happening, so there is a sense of, “Oh man, it can happen here,” which is obviously a little terrifying. But I don’t think it’s hard to write jokes about it. I think it’s important to, actually, because we can so easily fall into despair. The moment we become apathetic to those things, that’s when they win. Joking and laughing is a way to fight that apathy.

Bostonia: Where do you find inspiration for your writing?

Felipe Torres Medina: There are some things that are so absurd that you have to call them out, which I think happens a lot as an immigrant or an outsider. I wrote a piece for McSweeney’s a couple years ago that was about historically accurate things to shout at your Cinco de Mayo party. I’m not Mexican, but I know it’s not a big deal there—it’s just this strange thing that Americans have decided to celebrate. And, for a while my fiancée signed up for all of these subscription boxes and that was the inspiration for a piece that I wrote for the New Yorker. I find that as Americans, we’re a society of comfort, and I like poking fun at those things that the United States takes for granted.

Bostonia: Late-night television is notoriously competitive—why do you think The Late Show is so popular?

Bostonia: How have social distancing practices in reaction to COVID-19 impacted your work?

Felipe Torres Medina: Well, for starters, we’re no longer doing shows at the Ed Sullivan Theater. Once Governor Cuomo asked to limit groups of 50 or more people, we stopped bringing audiences in. Soon thereafter, all the other shows in New York City stopped broadcasting from their theaters and studios. The challenges that come from making our show from home—a production that involves hundreds of people daily—haven’t been easy, but it’s been very cool to see how we’ve not only managed to pull it off, but keep improving the show every day we do it.

Bostonia: How do you create humor about tragedy?

Felipe Torres Medina: If I didn’t make humor out of tragedy, I’d probably go crazy. It’s a defense mechanism and a way to feel something other than fear. Also, I have too many useless references to sci-fi in my brain that are unfortunately relevant in these apocalyptic times.

Bostonia: What’s it like to write material that Colbert will broadcast from his home—even his bathtub?

Felipe Torres Medina: It’s very, very fun. We try to come up with ways to communicate to people that, yes, this is strange, yes, this is hard, yes, this is scary, and yet, here we are. Here we all are in this large bathtub. Because the other option is to be outside and that’s bad. So, I try to write with this voice that says, “Come on in. The water’s warm and we have canned goods in here.”