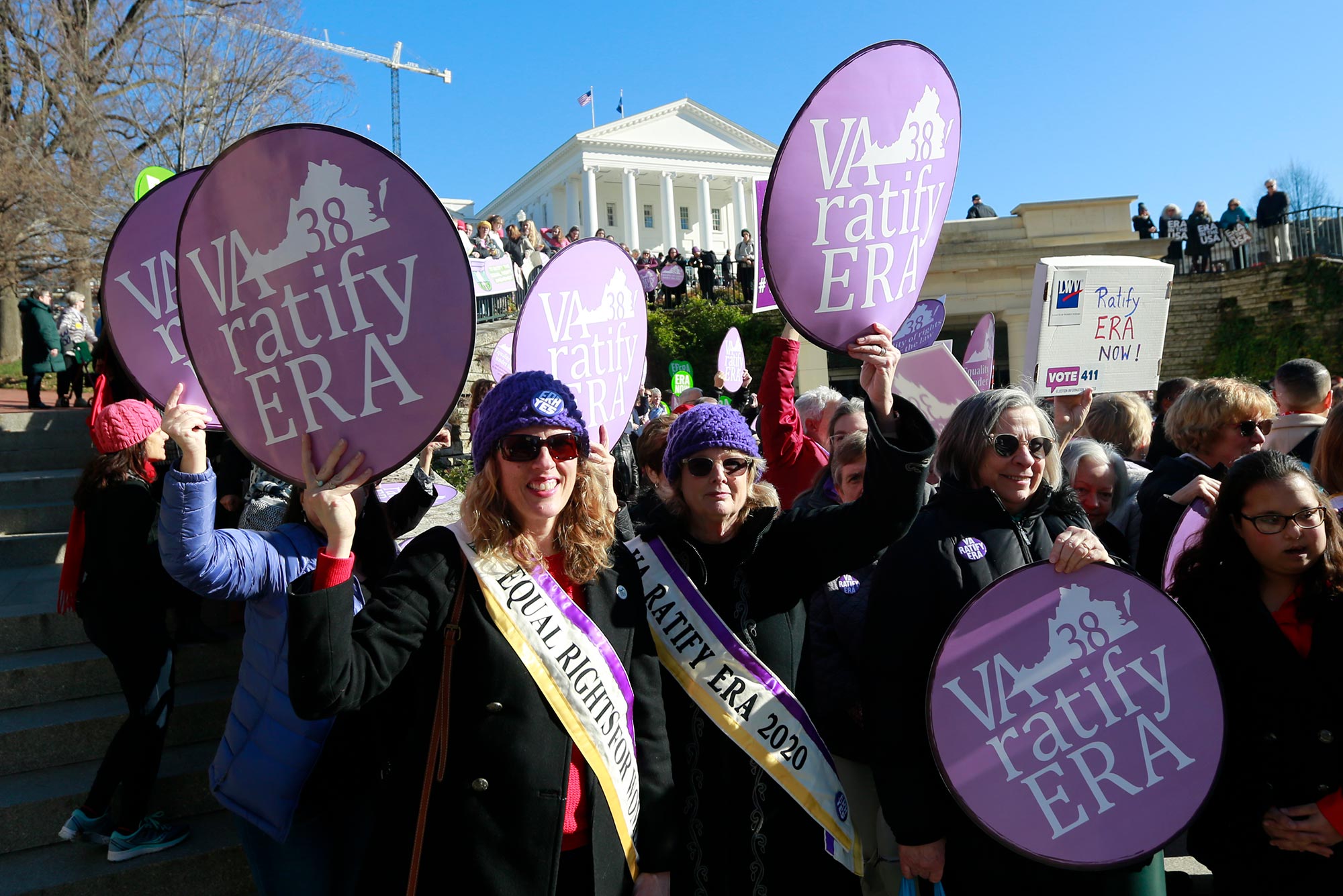 Equal Rights Amendment supporters demonstrate outside the Virginia state capitol in Richmond on January 8, 2020. Since 1982, when the ERA had been ratified by 35 of the 38 states needed, 3 more states have passed it: Nevada, in 2017, Illinois, in 2018, and Virginia, on January 15, 2020. AP Photo/Steve Helber

When Carol Jenkins began her journalism career, “women covering politics was virtually unheard of. You could do the flower shows, you could do the entertainment,” she says, “but the way the news operations worked was, if you had several men ahead of you in line in the political coverage territory, they would actually say to you, ‘You just have to wait until one of those guys dies.’”

Jenkins (Wheelock’66), a former New York television journalist, did go on to cover politics. She anchored WNBC-TV’s evening newscast and covered presidential and mayoral politics. She traveled to South Africa to report on the 1990 release of Nelson Mandela after 27 years in prison. She was the founding president of the Women’s Media Center, a national nonprofit that does advocacy and training for women in media.

Now, as the nation marks the centennial of the 19th Amendment, which gave women the right to vote, she’s fighting for equality not just in newsrooms, but on the national level. Jenkins is copresident, with Jessica Neuwirth, and CEO of the sister organizations ERA Coalition/Fund for Women’s Equality. The organizations, founded in 2014, are dedicated to the passage and enactment of the Equal Rights Amendment (ERA), taking up the work of suffragist Alice Paul, who led the effort for passage of the 19th Amendment before pushing an early version of the Equal Rights Amendment.

The ERA was designed mainly to invalidate state and federal laws that discriminate against women. Its central principle is that sex should not determine the legal rights of men or women: “Equality of rights under the law shall not be denied or abridged by the United States or by any State on account of sex,” and Congress “shall have the power to enforce” it.

For women, the amendment is promoted as a way to bolster pay equity, domestic violence laws, and pregnancy discrimination protections, among many other things.

Virginia’s approval doesn’t mean the US Constitution will be amended anytime soon. Legal fights against the ERA are anticipated.

Still, it’s a long-sought milestone, and the result of work by women such as Jenkins.

She says her work for the ERA is her passion. “When I started nonprofit work with the Women’s Media Center, we thought that that would correct a lot of the problems,” says Jenkins, a recipient of a 2019 BU Distinguished Alumni Award, the University‘s highest honor for alums. “It did correct some of them, although we’re still not participating in the news on an equal basis.” She notes that few women of color have anchored network television news shows since Carole Simpson’s breakthrough at ABC in 1988.

“The Equal Rights Amendment would go to a more fundamental lack of opportunity and protection that need to be instated so that we can truly make that equality mark. As far as I can see, it’s the only thing,” Jenkins says. “We’ve tried everything else. We need to go back to the Constitution, the document that dictates how we live our lives in this country, and we need to insert that fairness so that people cannot be discriminated against based on sex.

“The problem with leaving women out of the Constitution—and that was done deliberately—is that they were thought of then as second-class citizens, and that remained true even during the 1970s,” she says. “Women still had a difficult time getting credit cards in their name or buying a house. You couldn’t do that unless you had a man who could vouch for you. People forget that it was just that recent in our history. And now, even if young women have powerful jobs, they’re told to be grateful for it and not to seek more money or more responsibility.”

At the same time, she says, people should not misconstrue the ERA as simply a vehicle for achieving equal pay. “It think it ultimately would do that, but more than that, it will give fundamental respect and representation when they go to court—that there is a route for you to be able to be here.”

Women and their male supporters must continue to push for the ERA, Jenkins says, even as some Americans believe women have already made enough progress.

“We think there will be this groundswell of understanding and respect for women in this country,” the longtime women’s rights activist says. Her goal is that “that idea, written into our original Constitution, that we did not matter, has been fixed and we now matter.”