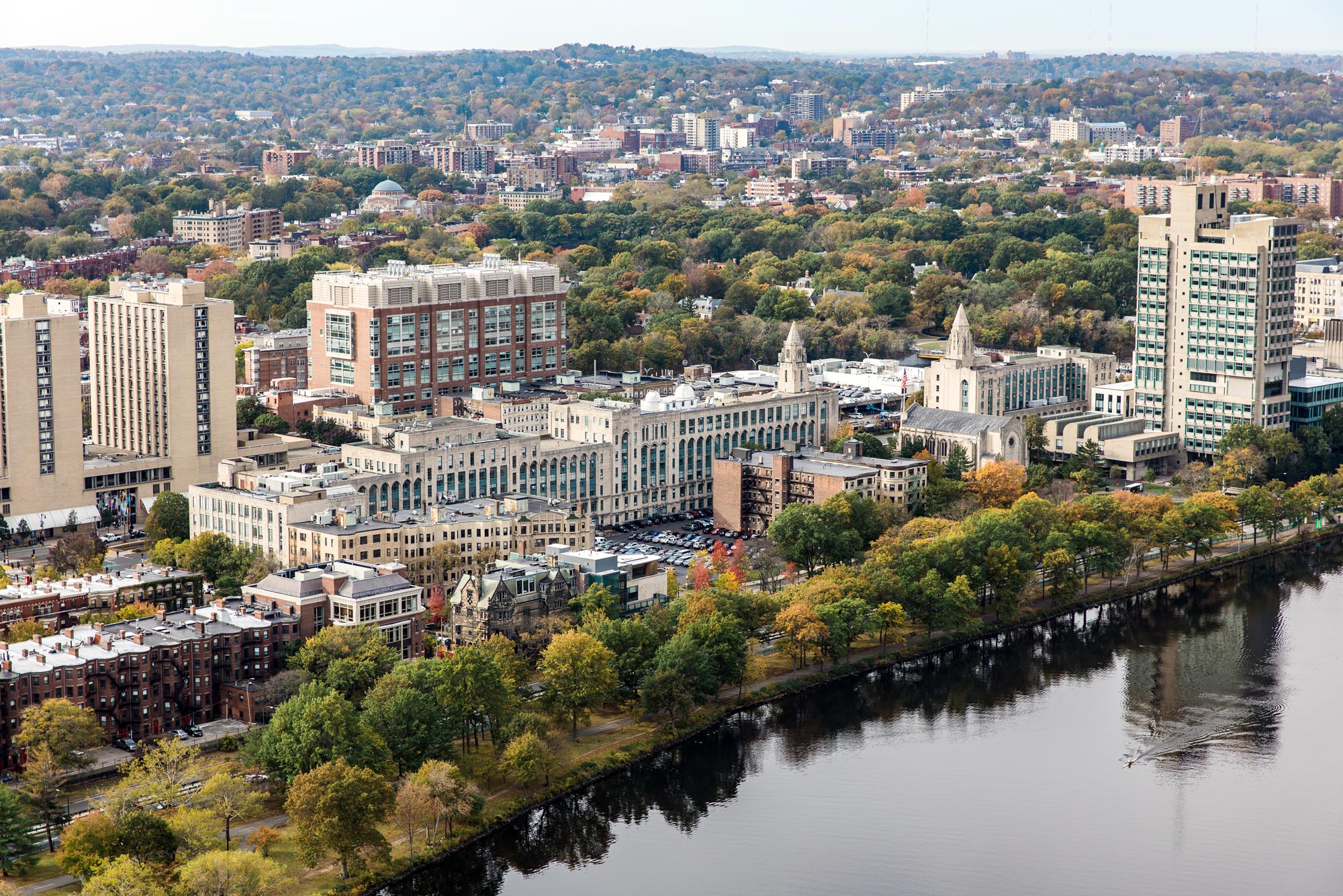 BU bought the land that became the Charles River Campus one century ago, on February 28, 1920. Photo by Above Summit for Boston University Photography

Check out the century’s pivotal moments

In some parallel universe, more BU dorms boast riverfront views, and the University community strolls peacefully down to the Charles. But in this real-world universe, the commonwealth of Massachusetts decreed, back in the Jazz Age, that it needed the land to build Storrow Drive.

Taking it by eminent domain from the University—less than a decade after BU purchased 15 acres between Commonwealth Avenue and the Charles River on February 28, 1920—was just one of the many twists that have molded the Charles River Campus (CRC) into the space where we study, work, and live in the 21st century.

History of BU: A Timeline

Boston University’s history goes back to 1839, long before construction of the Charles River Campus began.

BU paid about $4 per square foot for the CRC land 100 years ago to fulfill the dream of BU’s third president, Lemuel Murlin, who led the University from 1911 to 1924. It would take decades to fully realize his ambition of centralizing BU’s buildings, then scattered about the city of Boston, to create a sense of community. Despite the loss of the Storrow Drive land, the CRC grew inexorably, as the University evolved from a commuter school to a world-class research institution.

In honor of the centennial of the CRC land buy, BU Today has put together a timeline revisiting some of the defining moments on the campus over its first century. In a place where bulldozers seem to run perpetually, we’ve had to leave out some big building projects. We also omit BU-relevant, but noncampus events, like the graduation of our most famous alumnus, since Martin Luther King, Jr. (GRS’55, Hon.’59) had to skip his Commencement because of financial constraints and his wife’s pregnancy. Instead, our timeline is meant to be a sampler of developments, from epic to quirky, that helped transform BU into America’s fourth-largest private, nonprofit residential university.

Among the first CRC buildings to be occupied are three adjoining ones at 332-336 Bay State Road that become the University’s first all-female dorms.

The BU Bridge (originally called the Cottage Farm Bridge for a nearby Brookline neighborhood) opens, replacing a pre–Civil War drawbridge. There aren’t as yet a lot of BU folks on the infant campus to cross over into Cambridge. Still, the span has a distinction it still retains: it’s one of the few bridges in the world (the others are in Oregon and Portugal) where “a boat can row under a train ridden under a car driven under an airplane.”

A new subway opens between Kenmore Station and Blandford Street, the easternmost leg of what will become the MBTA B Line that traverses the campus and carries passengers on to Boston College.

What’s a campus without a campus watering hole? The Dugout opens downstairs at 722 Comm Ave, with one of the first liquor licenses granted in Boston after the repeal of Prohibition in 1933. Over the years, it draws professional athletes and criminals as well as Terriers. It’s still going strong in the 21st  century.

The College of Liberal Arts (now the College of Arts & Sciences) dedicates its new building and ushers in a transformative era for the Charles River Campus. Also in 1948, the new campus home of BU’s first school, the School of Theology, which dates back to 1839, is completed. The following year, the cornerstone is laid for the $1 million limestone Marsh Chapel at the center of campus. The buildings anchoring the CRC’s geographical bull’s-eye are now in place.

The first Catholic Mass is celebrated on this historically Methodist campus, drawing more than 800 students. It heralds BU’s embrace of all faiths and presages the following year’s opening of the campus’ Hillel House. Disdaining the quotas on Jews and other minorities that have marred the history of some elite universities, BU, in the words of Daniel Marsh (STH’08, Hon.’53), fourth president of BU, boasted “more Jews than Brandeis and more Catholics than Boston College.” Protestants of all denominations have fallen to 40 percent of the student body by 1952.

Rev. Howard Thurman (Hon.’67) preaches his first sermon as dean of Marsh Chapel, and makes history as the first black dean at a mostly white American university. The national media attention his appointment attracts serves as a magnet for Marsh’s dwindling congregation. Thurman’s fame and preaching quickly fill the pews every Sunday.

Also in 1953, BU creates the nation’s first African Studies Center, cofounded by Adelaide Cromwell (Hon.’95)—still going strong today—on the cusp of a flood of international students during the 1950s. The following year sees the debut of BU’s International Student Center; within three years of its opening, there will be more than 500 international students from 82 countries on the CRC.

WBUR, the eight-year-old noncommercial educational radio station licensed to the University, moves onto campus, at 640 Commonwealth Ave. (Today, the award-winning National Public Radio station is at 890 Comm Ave.) It has overcome the birth pains of its 1950 introductory broadcast, when President Marsh stumbled in describing the new station: “BUR stands for ‘Boston University Radio,’ and the ‘W’ stands for… for… well, it must stand for something!” (“W” is the first letter, under the International Radiotelegraph Convention, for all stations east of the Mississippi.)

The University’s first Orientation Week welcomes a record 2,650 freshmen, reflecting BU’s transformation from commuter school to the residential community Murlin envisioned. More than 6,000 students now live on the CRC or nearby in frats and apartments. A mere decade earlier, fewer than a third as many students lived within walking distance of campus. (In 2020, on-campus residents number more than 11,000.)

The condom wars come to the CRC. A reported 2,000 students assemble for a talk by birth control advocate Bill Baird, who passes out contraceptives—breaking state law restricting such distribution to doctors. The case draws national attention until 1972, when the Supreme Court throws out Baird’s conviction and grants contraception-use rights to unmarried couples.

An epic year. John Silber (Hon.’95) is inaugurated as BU’s seventh president. The tart-tongued leader’s first target: the CRC, which he likens to an ugly marriage of LA’s Sunset Strip and New York City’s 42nd Street. (He opposes capital punishment, but says he’d make an exception for the designer of Warren Towers.) His extensive architectural and aesthetic upgrades over the years will include the BU Beach (Warren Alpert Mall) behind Marsh Chapel, which becomes a warm weather attraction for studying and tanning. (It’s called “Beach” because the passing cars on adjacent Storrow Drive have a sound reminiscent of surf.)

The LGBTQ movement (that name is years in the future) takes its first baby step on campus, as a trailblazing handful of gay students create their own organization.

A women’s center debuts at the University, which had awarded the nation’s first PhD to a woman back in 1877. Founded by women professors and students with work-study money, the center is at Newman House, BU’s Catholic student home at 211 Bay State Road.

Cornwall’s Pub plants the Union Jack on East Campus with British-style food and drink and games. Kenmore Square 2020 is a far cry from the seedy hub of the Nixon years, but Cornwall’s is still there, a popular Terrier haunt despite bouncing between various Square addresses over the years. (It recently moved to its fourth spot.)

Up the avenue on West Campus, another soon-to-be dining icon— T. Anthony’s—opens. It’s been slinging pizzas ever since.

From commuter school to residential campus to renowned research university: BU begins its evolution with the completion on Comm Ave of the Arthur G. B. Metcalf Center for Science and Engineering.

Emmy Award–winning daytime TV host Phil Donahue usually couldn’t care less about dorm policies. But he broadcasts from BU during the fall as national media cover turmoil over a new 11 pm curfew for guests of the opposite sex in student rooms. Silber says the rule addressed complaints from students that they were being kept out of their own rooms by roommates’ romantic encounters at night. But more than 1,000 people rally at Marsh Plaza against what they call a puritanical return to an older era. The policy takes effect in 1989. (In 2020, students are permitted overnight guests for a limited number of occasions.)

Ladies and gentlemen, the president of the United States. George H. W. Bush (Hon.’89) copters to Nickerson Field on Marine One to receive an honorary Doctor of Laws. He even brings another president, France’s Francois Mitterrand (Hon.’89), who receives the same degree. Both address the graduates.

On the BU Beach, sculptor Russell Jacques (CFA’66) unveils Counterpoint, which quickly becomes the “whale sculpture,” in everyday parlance. Jacques’ own description of his work is a bit more artistic: “delicate in character…with an almost ethereal contrast to the landscapes they occupy.” Whichever description you prefer, the work, resembling the back end of a whale passing under an oval, becomes a convenient spot to rest against on pleasant spring, summer, and autumn days.

Agganis Arena is dedicated, opening a new era in CRC athletics and celebrating a life cut tragically short. Harry Agganis (Wheelock’54) excelled in football and baseball and went to the majors with the Red Sox even before his graduation. One year after getting his degree, he died from a pulmonary embolism at age 26. The opening of his 290,000-square-foot namesake arena, its signature statue of the “Golden Greek” greeting visitors at the front entrance, creates a new home for BU’s men’s ice hockey team.

This time, a Marsh Plaza rally is a celebration instead of a protest or a memorial. The men’s ice hockey team sweeps every tournament crown: the Ice Breaker, the Denver Cup, the Beanpot, the Hockey East regular season, and the Hockey East tournament, before clinching the team’s fifth national championship at the Frozen Four in Washington, D.C. (And the Hobey Baker Award, for the top NCAA hockey player, was snagged by Matt Gilroy [MET’09].) Boston clears Comm Ave for a victory parade, complete with Duck Boats, culminating at the plaza.

The campus also hits an architectural milestone, and ends a decades-old migraine over housing, with the opening of Student Village II to complement the nine-year-old StuVi I. At 282 feet, StuVi II becomes the tallest building on the Charles River Campus, dethroning the School of Law Tower. BU had acquired the land, formerly a state armory, back in 1983 and targeted it for housing in 1988. But a recession, followed by the University’s competing building needs, stalls the dual-dorm complex until the 21st century. The Boston Globe proclaims StuVi II “perhaps the most opulent residence hall to ever grace the local college landscape.”

One week after the Boston Marathon bombings that killed three people and injured hundreds, an overflow crowd, including the governor and lieutenant governor of Massachusetts, fills the George Sherman Union for a memorial to one of the dead, Lu Lingzi (GRS’13). Tearful friends and family recall a gifted statistics student who loved blueberry pancakes and Itzhak Perlman. At the end of the ceremony, Lingzi’s family, who had come from China, rise in the front row and bow to the audience.

Aiming to become a leader in a booming field, BU unveils plans for an iconic new 19-story tower, the Center for Computing & Data Sciences. When completed in 2022, the building will be the tallest on the CRC and will bring the math and statistics and the computer science departments and the multidisciplinary Hariri Institute for Computing and Computational Science & Engineering under one roof—and advance Boston University’s bid for preeminence in a defining discipline of the second century of the Charles River Campus.