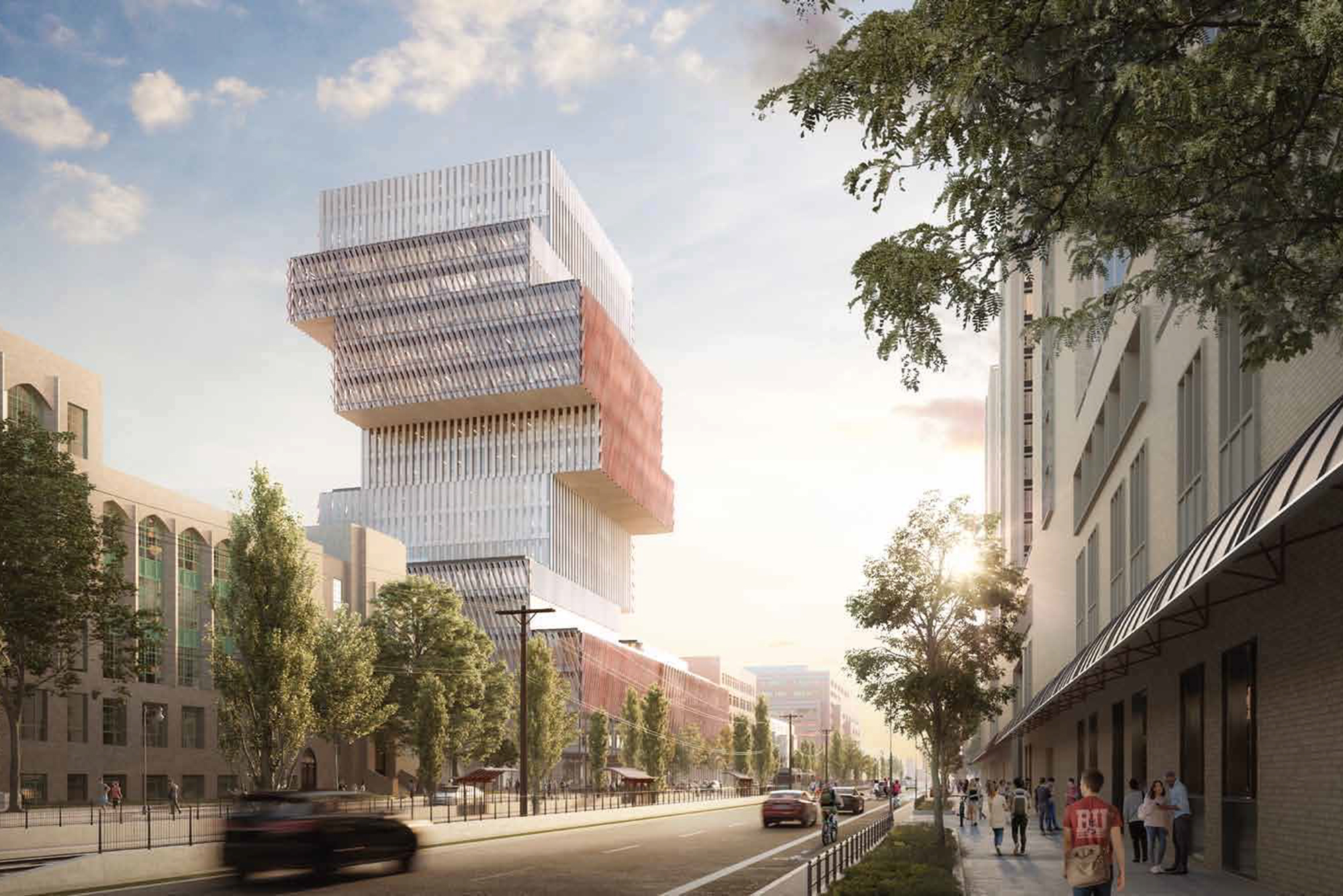 A new era for Boston University, in which the burgeoning fields of computing and data sciences are ingrained throughout the University’s interdisciplinary curricula, took two big steps forward on Friday, September 20: BU’s Board of Trustees, in town for a meeting and the culmination of the University’s first comprehensive fundraising campaign (which raised more than $1.85 billion), approved both the construction of a building to house the Center for Computing & Data Sciences and the formation of a new faculty unit to lead the discipline.

“We have an opportunity to lead in an emerging, important field that will impact essentially all the disciplines in the University,” says Robert A. Brown, BU president. “This building is a physical statement about our commitment to the field. Just as the center will be the physical center of our efforts in the data sciences, I also hope that the Faculty of Computing and Data Sciences will be the connecting tissue for faculty, staff, and students working in these exciting areas.”

After five years of discussion, planning, and ultimately, approvals, BU’s Board voted to begin construction on the 19-story building at the heart of the Charles River Campus in the spring of 2020. The Board’s vote came after the bold, and also controversial, building design won unanimous approvals from the Boston Planning and Development Agency and the Boston Civic Design Commission, whose commissioners are prominent regional architects and designers.

As for expansion of the University’s commitment to faculty in the data sciences, the Board approved the creation of the Faculty of Computing & Data Sciences, a novel academic unit that will bring together faculty from across the University. A new position, associate provost for computing and data sciences, will lead it. This organizational structure was recommended by a faculty task force that reported last spring.

A number of factors ultimately drove BU’s decision to invest so aggressively in computing and data sciences. First is that the world has changed so fast, becoming increasingly global, diverse, and connected through the personal data of anyone who uses the internet. Also, the University has heard from faculty and staff a desire, indeed a need, for more and better data analytics to advance their own fields. Students have chimed in, too. Seeing a world where data analytics and computing skills are not merely helpful, but essential to everything from work to health to fitness to entertainment, they wanted their University to provide them with the skills and tools to thrive. At the College of Arts & Sciences, for example, the number of computer science credit hours taught has more than doubled in just the last five years. The number of undergraduate and graduate majors in mathematics and statistics has increased by more than 35 percent in that same time period.

And the investment is happening at a particularly opportune moment in the career market.

The website Glassdoor has ranked “data scientist” the hottest job in America four years in a row and the US Bureau of Labor Statistics says the “rise of data science needs” will create 11.5 million job openings by 2026. At the same time, there is a shortage of qualified data scientists.

To help fill that void, BU is erecting a 345,724-square-foot building at the corner of Comm Ave and Granby Street that resembles a giant stack of books and will be completely fossil-fuel free, making it one of the most energy-sustainable buildings in all of Massachusetts.

Talking about the building, Jean Morrison, University provost and chief academic officer, says the new center will create a focal point for the entire range of computational work by putting it all under one roof. “The building will allow us to organize for collaboration across data sciences, housing both the departments of computer science and mathematics and statistics, as well as the Hariri Institute for Computing and Computational Science & Engineering and the new Faculty of Computing & Data Sciences,” Morrison says.

The building will be the tallest on the Charles River Campus, surpassing StuVi II at 33 Harry Agganis Way. And it will continue the Commonwealth Avenue makeover and the enhancement of BU’s urban campus that began under Brown’s tenure.

The role that computing plays in academia is the connecting tissue for interdisciplinary pursuits. It’s at the crossroads connecting, physically and intellectually, our various colleges to one another.

The Center for Computing & Data Sciences will create “a physical embodiment of the centrality and collaborative nature of research and education” in computing and data science, says Azer Bestavros, a William Fairfield Warren Distinguished Professor and founding director of the Hariri Institute. “Computing is not about computers or IT,” Bestavros says, but rather it’s “all about people and ideas.”

Replacing a parking lot at the Granby Street corner, the center is in a central campus location. It will sit across the street from the Kilachand Center for Integrated Life Sciences & Engineering and between Sargent College of Health & Rehabilitation Sciences and the Stone Science Building. That location is no accident in a newly digital universe: it’s part of a broader BU goal of encouraging students, faculty, and staff to collaborate campus-wide, not just within their areas of focus. “The role that computing plays in academia is connecting tissue for almost all fields of study,” Bestavros says. “It’s at the crossroads connecting, physically and intellectually, our various colleges to one another.”

The unusual building design has been both lauded for its bold and radical look, and at the same time criticized for trying to be too different and overly modern in a city where contemporary architecture doesn’t blend in easily with century-old stately brownstones.

When KPMB Architects of Toronto began its design work, Bestavros had some simple advice: “Hide computers and put whiteboards and people on display.”

And now that he’s seen the final schematics? They “did just that,” he says.

“The design of the building as a vertical campus,” Bestavros says, “connects the [computer and data science] ‘public square’ at the lower floors with classrooms and labs for our math, stats, and computer science programs at the middle floors,” which in turn will meld with the Hariri Institute’s research space on the upper floors.

With the trustees approval secured, city officials will do one final review of construction plans during the winter, according to Gary Nicksa, BU’s senior vice president for operations. Assuming all goes as scheduled, he says, “we hope to break ground next spring,” with construction to be completed in summer 2022.

A Big Building for Big Ideas