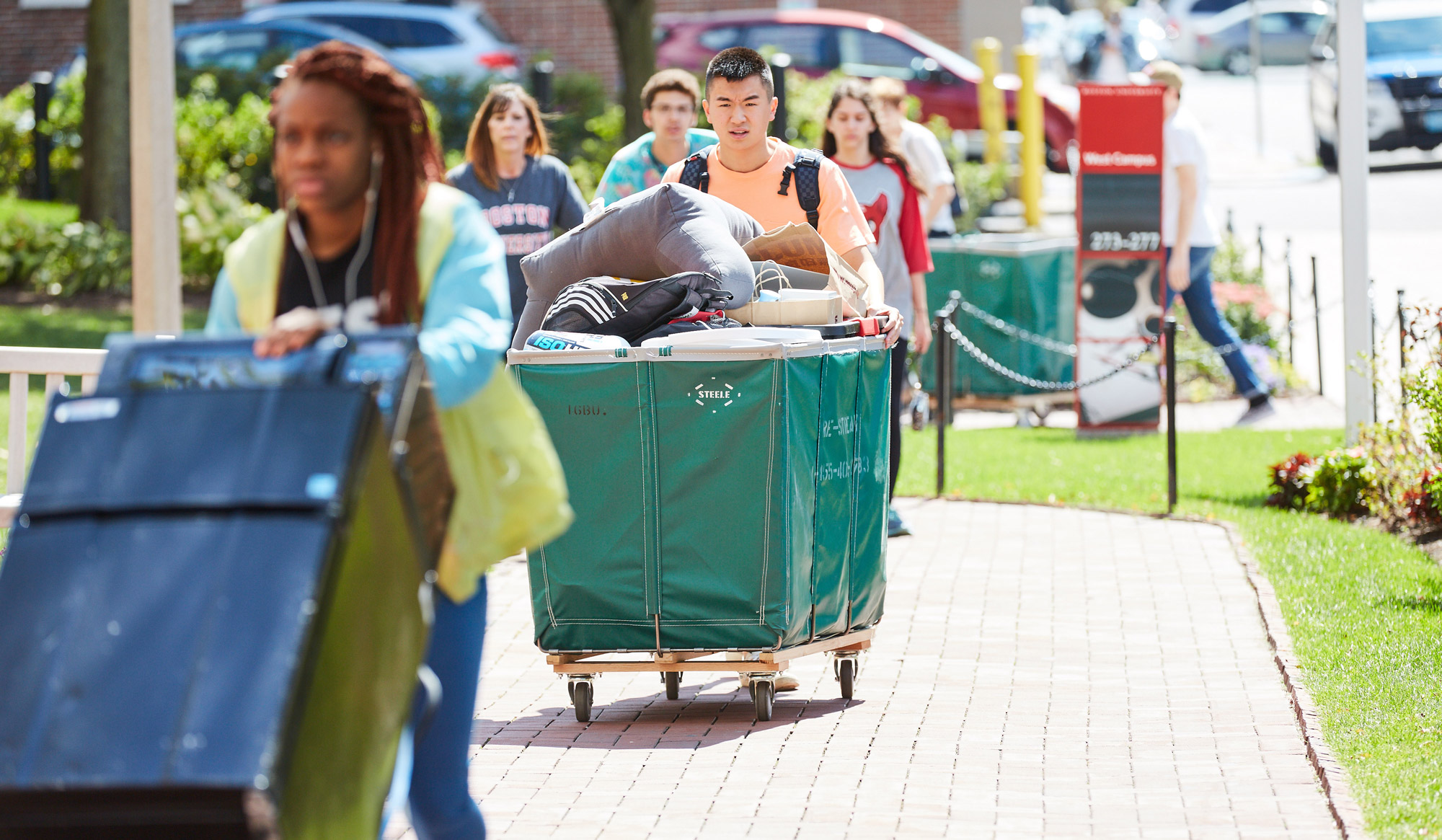 The busiest day of Move-in week is not Saturday, August 31, as one might expect, but Wednesday, August 28, when approximately 3,000 students are expected to arrive for early move-in. Photo by Kelly Davidson

All you need to know about parking restrictions, navigating street closures, and best times to arrive

On Saturday, August 31, and Sunday, September 1, West Campus students moving into Claflin, Sleeper, and Rich Halls and 1019 Commonwealth Avenue will be directed to park in the Langsam Garage and outer lot; the garage entrance is on Gardner Street. The Langsam Garage and outer lot will have limited spaces for faculty and staff parking permit holders from Monday, August 26, through Sunday, September 1.

From Saturday, August 31, through Monday, September 2, Student Village residents moving into 33 Harry Agganis Way or 10 Buick Street will be directed to park in the Agganis Arena Garage.

On Sunday, September 1, Harry Agganis Way and Buick Street will be closed from 1 to 3:30 pm for Matriculation. During this time, vehicles will be unable to enter or exit these roadways or adjacent parking garages and lots. The Agganis Arena C-2 lot (the lower outdoor service lot) will be closed to faculty and staff parking permit holders Monday, August 26, through Sunday, September 1.

To keep the bicycle lane open, no vehicles are allowed to unload in front of Warren Towers. Access will be through the Warren Towers Garage only, which is accessible off of Hinsdale Street. There will be limited parking for faculty and staff parking permit holders from Monday, August 26, through Sunday, September 1.

Beginning Wednesday, August 28, students moving into the Fenway Campus may use Pilgrim Road, with the exception of Friday, August 31, between the hours of 7 am and 1 pm, the time nearby Simmons University will be conducting its student orientation.

From Wednesday, August 28, through Monday, September 2, Bay State Road will be closed to through traffic from 8 am to 6 pm. Only residents, delivery trucks, and students moving in to BU will be allowed access.

On Sunday, September 1, the BU Bridge and University Road will be closed for a short period of time, between 1 and 2 pm, to accommodate the thousands of freshmen proceeding from East Campus to Agganis Arena for Matriculation.

And although University officials expect a smooth process, Paul Riel, associate vice president for Auxiliary Services, says that students and their families may want to try to avoid peak congestion times.

For example, the Warren Towers parking garage will probably be full by early afternoon on Saturday, August 31. And there may be wait times for those looking to unload their cars on Saturday afternoon on streets near Claflin, Rich, and Sleeper Halls.

Also important to know: the busiest day of Move-in week is not Saturday, August 31, as one might expect, but Wednesday, August 28, when approximately 3,000 students are expected to arrive for early move-in, according to Riel.

“Patience is important,” he advises. “Even though this is very well organized, with plenty of parking and people to help, it’s still a lot of people coming into areas that are constrained. So don’t be too anxious.”

One bright spot for everyone arriving on campus: the Red Sox are out of town all week, which should ease traffic in the neighborhood. Also, there are no expected traffic impacts from the ongoing Kenmore Square redevelopment project or the work now wrapping up to improve Comm Ave west of the BU Bridge.

Riel and Robert Molloy, BU Police Department deputy chief, say that this year sidewalk reconstruction is underway on the east side of Babcock Street, so the usual unloading zone for students in Claflin, Rich, and Sleeper Halls won’t be accessible. The University has bought out parking meters along Gardner, Ashford, and Alcorn streets to create an ad hoc unloading zone, and will have student volunteers in the area to help families unload their cars, fill carts, and guide them to the dorms.

Molloy also says the BUPD “will be vigilant about bike lane safety” for both riders and arriving students and their families. That means officers will be enforcing rules against cars and trucks blocking bike lanes, especially in the critical areas in front of Warren Towers (700 Comm Ave) and the George Sherman Union (775 Comm Ave).

Police officers will be positioned at numerous locations around campus to help keep things moving, including on Pilgrim Road on the Fenway Campus Friday through Sunday, where a state trooper will be keeping an eye on the Riverway.

The first 1,300 students are expected to arrive Monday, August 26, Riel says. Among that initial influx are freshmen and transfer students checking in for this year’s First-Year Student Outreach Project (FYSOP), the Community Service Center program that brings new students to campus a week early to volunteer for community service projects across the city.

Early move-in follows on Wednesday, Thursday, and Friday between 10 am and 4 pm.

Freshman and new student move-in is Saturday and Sunday from 9 am to 5:30 pm, although it’s recommended that new students arrive by noon on Sunday so they can participate in the Matriculation procession.

The BU Shuttle (the BUS) will provide 20-minute (peak) and 30-minute (off-peak) service to the 12 regular weekday stops between the Charles River Campus and the Medical Campus during Move-in week, including Labor Day, Monday, September 2. Additionally, a Fenway Campus shuttle will provide service to five stops along its regular weekday route, including its Brookline Avenue at Pilgrim Road stop and 766 Commonwealth Avenue stop (directly across from the George Sherman Union) beginning Wednesday, August 28, and continuing through Monday, September 2.

The annual Matriculation ceremony—the official welcome for the nearly 3,200 members of the Class of 2023—is at 2 pm on Sunday, September 1, at Agganis Arena, preceded by a procession along Comm Ave by freshmen emerging from their new residence halls. The procession kicks off at 12:45 pm at Myles Standish Hall.

Have a question about Move-in week? Leave it in the Comment section below, and we’ll try to answer it quickly.