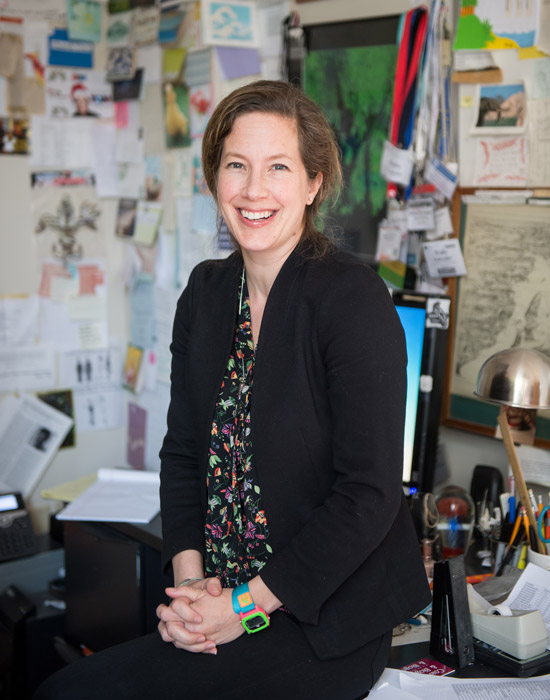 Robinson W. “Wally” Fulweiler, a CAS associate professor of earth and environment and of biology, is the winner of the 2019 Metcalf Cup and Prize, BU’s highest teaching honor. “I love my research, but in the end, the legacy of your students is how you really make a mark on the world,” Fulweiler says. Photo by Cydney Scott

Robinson W. “Wally” Fulweiler says she was shocked and humbled to win this year’s Metcalf Cup and Prize, the University’s highest teaching honor, but listen to her talk about her work and it becomes immediately apparent why she was chosen.

“I love teaching, and I spend a lot of time on it, and I think it’s one of the most important jobs we have,” she says. “I love my research, but in the end, the legacy of your students is how you really make a mark on the world.”

Fulweiler, a College of Arts & Sciences associate professor of earth and environment and of biology, will be honored during BU’s 146th Commencement ceremony on Sunday, May 19, along with Metcalf Award winners Gregory Stoller, a Questrom School of Business senior lecturer in strategy and innovation, and Neal Fleisher (SDM’84), a Henry M. Goldman School of Dental Medicine clinical professor of general dentistry.

At first Fulweiler sounds disarmingly casual about her pedagogy. “I like to change things up in the classroom and encourage participation, so it’s not just me going, ‘Blah blah blah,’” she says. “I bring in a lot of props, a lot of interesting rocks.” But she is known for constantly refining her teaching methods in courses ranging from Introduction to Oceanography for undergraduates to Marine Biogeochemistry, a graduate-level class.

Fulweiler is an ecologist and biogeochemist whose research focuses on human impact on coastal ecosystems, such as the nitrogen cycle in estuarine and marine environments. “I do talk a lot about nitrogen,” she says with a laugh. “I get it into almost every lecture.”

These days, all such topics intersect with the issue of climate change.

“I think that students need to realize how important our home is, our Earth is, and what their role is in shaping the future,” says Fulweiler, who is also director of the BU Marine Program and a sought-after mentor for students planning to continue in the field. “I hope I make them feel empowered, not just depressed—empowered to make changes that will help the world.”

No surprise that her email signature includes a quote from Seneca: Beyond all things is the ocean.

While the scientific titles of some of her papers may sound pretty granular, the purpose of her lab is to understand how humans have altered coastal ecosystems, by studying nutrient cycles from the inland watershed to the Continental Shelf. “Nutrients don’t necessarily generate the same excitement as coral reefs or whales, which are wonderful, but without nutrients there is no life,” Fulweiler says. “It may sound granular, but it’s all connected.”

Students describe her variously as “passionate” and someone “who loves teaching.”

“My energy and enthusiasm that I bring to the subject is genuine, and I want students to feel that way, too,” she says. “I want them to feel that passion and realize that being a nerd is awesome. There’s so much cool stuff on this planet that we don’t know about, and so many grand challenges that I think we can solve, that you could rest in despair or get really energized about those possibilities and attack them.”

Metcalf Award winner Stoller’s office is decorated with the oversized copies of checks won by students he has mentored in start-up and venture competitions, where they successfully competed with students from the nation’s top-rated business schools.

“I am so incredibly proud of them,” he says with a grin. “The only thing I’ll ask you to include [in this story] is that our students are kicking ass.”

Stoller is known for courses that incorporate up-to-the-moment case studies and for involving area entrepreneurs in his classes and other programs. But he is most renowned for his Asian connections and the creation of two courses that culminate in overseas trips: the undergraduate Global Management Experience and the graduate International Consulting Project.

The undergraduate class includes a spring break trip to various destinations, where students explore local businesses. This year’s students traveled to Bangkok and Taipei. The graduate trip results from Stoller’s more than 15-year relationship with China Consultants of Advisory and Finance Management Co., Ltd., a strategy and consulting firm in Beijing that serves Chinese companies. The firm sends Stoller three assignments early in the summer, anything from creating a formula to assess brand valuation (a relatively new idea in China) to evaluating the utility of artificial intelligence in the financial services industry. Most are from clients, and some are topics the consulting company itself wants researched. The MBA, law, and engineering students in the class work on their analysis through the fall semester—with some starting in the summer via independent studies—and then in January travel to China to give two presentations, one to the consulting firm and one to the clients themselves.

“In the past few years, summer internships and/or permanent employment opportunities for students have emerged directly from these exchanges and are expected to continue,” Iain M. Cockburn, the Richard C. Shipley Professor in Management and chair of Questrom’s strategy and innovation department, wrote in a letter nominating Stoller for the award. Cockburn noted that much of these students’ work is also published in the Chinese business press.

Students describe Stoller as “one-of-a-kind” and someone who “connects students to the real world.”

Stoller’s deep connections to Asia began when he was an undergraduate at Cornell in the late 1980s. He was majoring in finance at the university’s School of Hotel Administration, and his father suggested he try Japanese to fulfill his language requirement. An internship at a hot springs resort in Japan led to a job in financial analysis at the Imperial Hotel (Stoller was the first American ever hired at the hotel, and the first ever promoted into management). Later he went to work at the Shiva Corporation in Bedford, Mass., before founding Coolidge Plaza, LLC, a real estate holding company here in Boston. In addition to his undergraduate degree, he has an MBA from Harvard Business School.

Stoller briefly taught at BU 20 years ago as an adjunct, and the professor who hired him, Peter Russo, had a connection who helped Stoller get a job at Boston College. He taught there for 15 years and returned to BU in 2015 when Russo retired. His Asian connections, nurtured while he was at BC, came with him. So did his focus on ushering students into the real world of international business.

“What I am most proud of is that every year we’ve created at least one job for a student,” Stoller says.

Think critically to get it right

At the Goldman School, Fleisher directs the predoctoral periodontology and faculty development programs and teaches seven classes throughout the four-year curriculum. He is known for his innovative teaching methods, including field trips to the Isabella Stewart Gardner Museum for first-year students to hone their observation skills.

“They are among the best of the best at answering multiple-choice questions; that’s how they got here,” he says of his students. “The problem is, a patient doesn’t present with choices A, B, and C listed on their chest. You have to go through a process and think it through to see what their problems are.”

After graduation from BU, Fleisher taught part-time for many years while he was in private practice. “It was a symbiotic relationship,” he says. “Private practice helped me with my teaching, and teaching kept me abreast of the latest and ultimately benefited my patients as well.”

A couple of years ago he was offered the faculty development post at Goldman and became a full-time faculty member. By then, his exploration of pedagogy had made him a devotee of critical thinking methods that force students to reexamine their assumptions and focus on the evidence in front of them.

“I often say we don’t need to critically think about everything,” Fleisher says. “Sometimes you are able to just rely on pattern recognition, to recognize something because you’ve seen it many times before. The problem is when it doesn’t quite fit the pattern and you kind of force it. You can make a square peg fit a round hole, but it doesn’t mean that it really fits well.

“The same thing happens in dentistry,” he says. “Where misdiagnosis occurs is when something doesn’t really fit completely and yet because you’re not going to think through the process and just rely on previous experience, you choose something that works instead of working through the diagnostic process completely. The goal is to make us better at diagnosing and to have fewer misdiagnoses.”

He lists a series of dental problems in recent decades resulting from bulimia, methamphetamine, and AIDS that were initially misdiagnosed because they were new. “The mouth is not separate from the rest of the body, and sometimes it’s a key indicator of other problems that exist,” he says.

In course evaluations, students praise his teaching. One wrote: “This is what true learning is.”

Fleisher earned a bachelor’s degree in psychology from Hofstra University. In addition to his DMD from BU, he also earned a SDM certificate of advanced graduate study.

A gift from the late Arthur G. B. Metcalf (Wheelock’35, Hon.’74), a BU Board of Trustees chair emeritus and former professor, funds the Metcalf awards, created in 1973 and presented at Commencement. The Metcalf Cup and Prize winner receives $10,000 and the Metcalf Award winners each receive $5,000. A University committee selects winners based on statements of nominees’ teaching philosophy, supporting letters from colleagues and students, and classroom observations of the nominees.