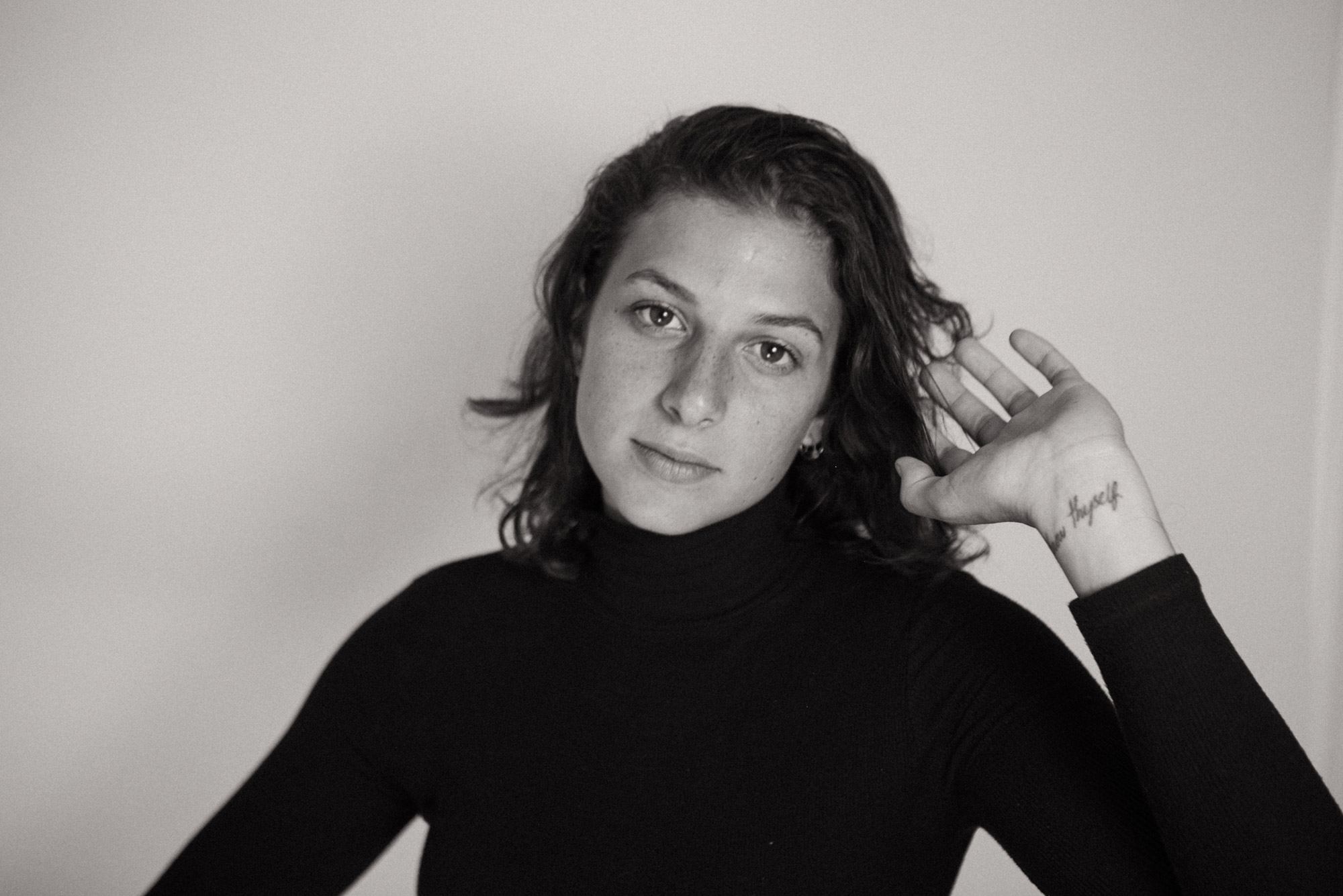 Chronic Lyme disease has forced Hannah Olson (SHA’17) to focus on how to create a life that she can live to the fullest. Photos by Kai Keane

Hannah Olson hates her chronic Lyme disease, but she’s also grateful for the new mission it has given her.

Olson suffers from fatigue, pain, and concentration problems and requires daily antibiotics and other medication through a permanent catheter in her arm. Lyme disease took away her dream job at a Washington, D.C., design agency by robbing her of the time and energy it required, eventually forcing her to quit. For a driven go-getter like Olson (SHA’17), it was a major disappointment.

But the disease has also forced her to focus on what’s important and on how to create as full a life as possible. Last fall she started a public benefit company, Chronically Capable, to help people like her get hired and remain employed.

Olson leads the company with five coworkers from a previous start-up. It has a growing profile in the halls of power, where she encourages companies to hire and retain people with chronic health challenges and lobbies the government for support.

“Chronically Capable is an employment platform that connects companies looking for an on-demand digital workforce with chronically ill professionals whose only means of working is through remote and/or flexible opportunities,” she says.

Now in a beta trial, the web-based platform is intended to minimize staffing costs for companies looking for the right talent for the right role, while bringing meaningful jobs to people who need them. Olson hopes it will help organizations control costs “while bringing back a sense of purpose and an income stream to those with a chronic illness.”

My phone didn’t stop for like two weeks, with people reaching out, saying this is what we need in society.

She isn’t sure where she got the tick bite that gave her Lyme; she didn’t notice it at the time. Olson says she could have been infected here in Massachusetts (she grew up in Marion), or possibly during the last few months of her senior year of high school, which she spent at the American School of Puerto Vallarta, Mexico. But by her sophomore year at BU, she knew something wasn’t right.

“I was really exhausted beyond the normal point for a college student,” she says. “The first thing that came to mind was mono, and I got tested and it came back positive, so I went home for two weeks and rested and came back thinking everything was going to be fine.”

Everything wasn’t exactly fine, but she went abroad to Australia as planned for the second semester of her accelerated path at the School of Hospitality Administration. “I started losing sensation below my hips, kind of a paralyzing situation. The doctors had no idea what was going on. I remember I was sitting in a park and I couldn’t get up. I would describe it as pins and needles but instead of just being in my feet or hands, it would start in my feet and go all the way up to my hips,” Olson recalls. “This would happen very unexpectedly. I was surfing in Australia and doing all these other things I loved, so it wasn’t great.”

She returned home, where she got a positive Lyme test result. It was then that the real troubles began, with a series of diagnoses and treatments that didn’t solve the problem. Certainly, the “this is all in your head” comment from a family doctor didn’t exactly help.

Chronic Lyme disease is a somewhat controversial diagnosis in the medical community, used to describe illness in patients with Lyme disease, but sometimes also people with different illnesses, who have no clinical or diagnostic evidence of a current or past infection with B. burgdorferi, the bacterium that causes Lyme. “There’s a lot of controversy in the Lyme community,” Olson says. “I have read everything and I’m still confused. There’s a lot of drama, organizations don’t get along. That’s something I really don’t want to get involved with.”

Finally a high-tech test diagnosed her with a European variant of Lyme as well as a couple of co-infections.

“My third year at BU was kind of a wreck,” she says. “I dropped 40 pounds, but I was still overloading my classes. Most people in my position take a break from their life, take a semester off or a year off, but I just didn’t want to do that. I walked in May 2017.”

Less than a month after graduating with a BA in hospitality administration, Olson got the catheter in her arm—called a PICC line, or peripherally inserted central catheter—and began a regimen of daily, self-administered, intravenous antibiotics. She also landed her dream job at a digital design firm in D.C., but the demanding culture there led her to prioritize job over health, which didn’t work so well. Eventually she gave up the job and took a digital marketing gig with a start-up, where she could be more up front about her health situation and where she found a more supportive atmosphere.

When the start-up team was looking to pivot to a new challenge last September, Olson says, “I just kind of blurted out, ‘What about connecting people with chronic illness to flexible work opportunities?’ Our (old) motto was connecting people to things they care about, and it felt like it went along with our core mission as a team.”

Chronically Capable is free to workers and will charge a recruiting fee to companies, matching them via a website and algorithms.

“I had no idea if it was a sustainable business plan,” Olson says, but so far, so good. She and the rest of the Chronically Capable team are building the site and recruiting companies and workers, while they secure angel funding for their public benefit corporation.

Olson is also lobbying both Congress and government agencies to improve opportunities for workers with chronic illness. She hopes to find a congressman or senator “who has chronic illness themselves to stand behind us.”

The monthly business magazine Fast Company took notice. In a June Q&A with Olson, the magazine acknowledged the scope of the problem, “More than 133 million people in the US have a chronic illness, according to the Centers for Disease Control and Prevention (CDC). Despite this, it has remained difficult to convince many employers to offer significant positions—outside of coding and a few other disciplines—to workers with chronic illnesses who might not be able to work a traditional onsite, 9-to-5 job.”

After the start-up was announced late last year, “my phone didn’t stop for like two weeks, with people reaching out, saying this is what we need in society,” Olson says.

“I’m impressed how Hannah has turned sickness into strength,” says Emily Levy, a mentor who is CEO and founder of Mighty Well, an online company that provides health information and medical news and products for patients, and who is also battling chronic Lyme. Mighty Well makes the PICC line covers Olson uses. “Hannah is not only helping others to find job opportunities, but she is being a role model for others living with chronic illness that you can be anything and do anything,” Levy says.

“It’s very exhausting to have a start-up while you’re sick,” Olson says, “but the more people say they need this, the more I want to see it happen.”

But she is also learning to balance her natural drive with taking better care of herself. “You can’t do everything—that’s a hard thing for me to recognize,” Olson says. “One thing at a time.”

There are 13 comments on Lyme Disease Set Her Back. And Pushed Her Forward.

Lyme Disease Set Her Back. And Pushed Her Forward.
13
share this