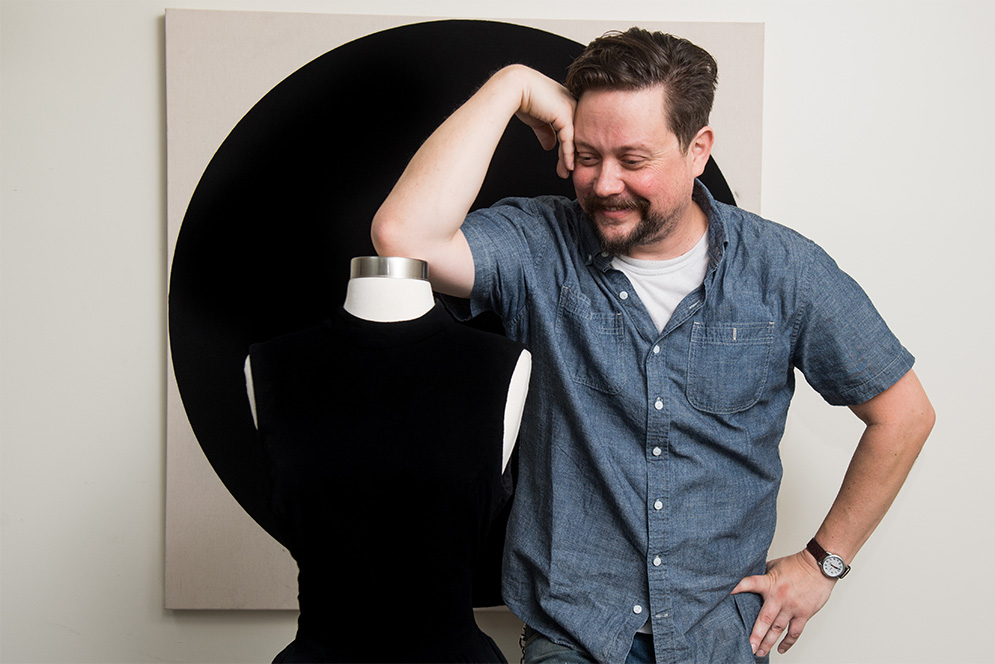 Painter Jason Chase (CFA’03) says NanoLab’s Singularity Black paint was “one of the most interesting and revolutionary things I’d ever looked at.” Photo by Cydney Scott

Light goes in. It doesn’t come out.

The paint defies reflection, rendering invisible the surface detail of an object coated in it. The object becomes a chromatic black hole. Even the paint’s name has a cool, slightly ominous vibe: Singularity Black.

Developed for NASA to reduce incidental glare on telescopes and other equipment used to study faint, distant stars, Singularity Black sucks up 98.5 percent of the light that enters it. A typical matte black paint absorbs only about 80 percent. Star-gazing scientists aren’t the only ones geeking out over the potential applications of this sci-fi wonder. For one of the first nonscientists to be given access to the pigment, it was “one of the most interesting and revolutionary things I’d ever looked at,” says Jason Chase  (CFA’03), artist-in-residence at NanoLab, the Waltham, Mass., firm where materials scientists created Singularity Black.

While still learning how to use it, Chase has created a light-defying little black dress—the paint renders wrinkles virtually invisible—and a sort of optical-illusion photo booth where a hanging disc painted with Singularity Black makes the poser appear headless.

The dress and some of Chase’s artworks using Singularity Black will be featured at the Museum of Fine Arts (MFA) tonight, October 10, as part of the free event Art and Innovation: In the Spirit of HUBweek.

Meanwhile, Chase is teaching other artists how to use the paint to help inspire more work that deceives—and intrigues.

Singularity Black is a formula built around carbon nanotubes, chemical structures 1/1,000 the width of a human hair. They’ve been used since the 1990s to improve the strength of plastic and provide thermal and electrical conductivity, and more recently in ultra-black coatings like Singularity Black.

The nanotubes’ light-absorbing property comes from their molecular structure and electric properties, as well as the physical structure of the coating. The key to the complex reaction: a photon (the basic unit of light) entering a nanotube is converted to heat and dissipates, says NanoLab nanocomposites director Tom Morgan.

NanoLab, which specializes in developing and designing nanotube products, grows the chemical structures by heating a carbon-bearing gas in a chamber to break up the gas molecules. The carbon atoms reassemble on surfaces in the chamber as cylindrical molecules that appear as black powder to the naked eye, but under a microscope look like spaghetti, Morgan says. NASA hired NanoLab to develop processes to untangle and align the nanotubes and suspend them in paint.

“We were able to develop a spray-coatable formulation, which hadn’t been done before,” says Colin Preston, NanoLab’s senior research scientist. “As we started to get some traction with optics companies, we really saw for ourselves the beauty, the aesthetic effect of these coatings, and it seemed there was some artistic use for this.”

A couple of years earlier, Preston had been given a present from his girlfriend, now his wife: a Drawing in Pubs class through the MFA. Attendees worked on their drawing skills while enjoying drinks, and Chase was the instructor.

In 2017, Preston invited Chase to visit the lab.

“He told me what I was looking at and asked me, did I want to make some art with it?” says Chase, who has shown his pop-surrealistic Americana oil paintings (like his rendition of the infamous Nagasaki mushroom cloud in Jiffy Pop Popcorn) at Atelier Gallery in Newport, R.I., and Bromfield Gallery in Boston’s South End. “I couldn’t wait to figure out how to use Singularity Black in my own work. And I’m excited to see how other artists are going to use it.”

Chase’s wooden easel is an anachronism perched in a corner of the NanoLab offices, near high-tech equipment such as an infrared spectrometer (used to identify chemicals) and a thermogravimetric analyzer (which measures a material’s mass throughout a change in time and temperature).

Lately Chase has used this spot to work on paintings with Singularity Black and other paints NanoLab is experimenting with, like Morganity White, a matte white oil paint that lightens any color blended with it, without changing the color’s hue.

From the start, Chase found using Singularity Black to be tricky, as it requires special spraying procedures, a dozen to 50 coats, plus a final heating process. It’s also “fume-y,” he says, so it needs proper ventilation. After application, the surface is easily marred with normal wear.

“It’s like a fussy nail polish,” Chase says. “It sprays on and then it dries, and even if you just peel up your masking, it will lift and tear. You have to cut every edge with a rounded blade.” And one milliliter of pigment covers one square centimeter of surface area, so the learning curve is costly. 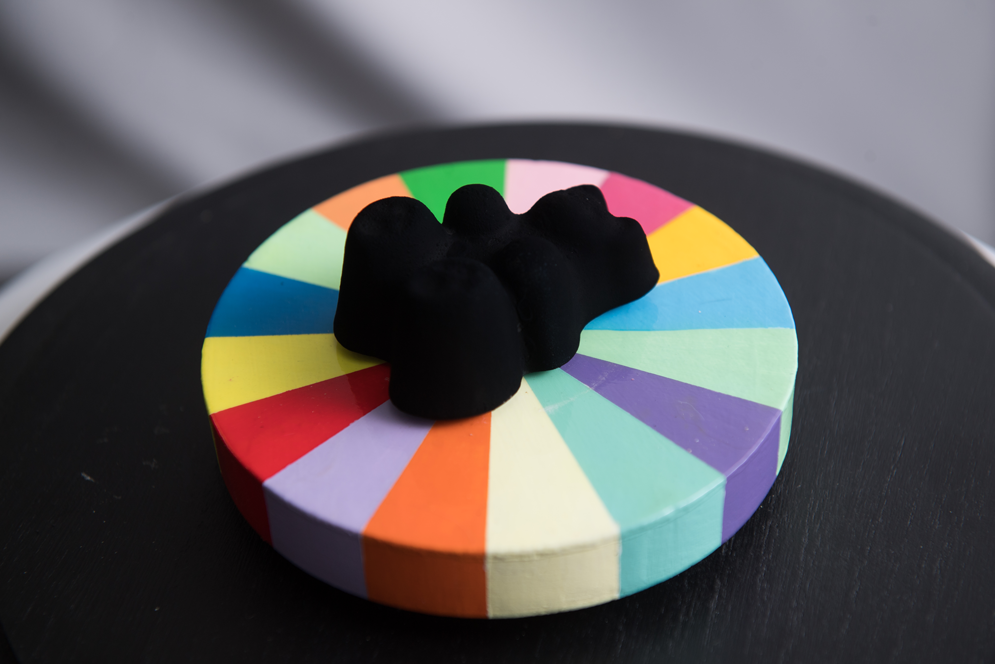 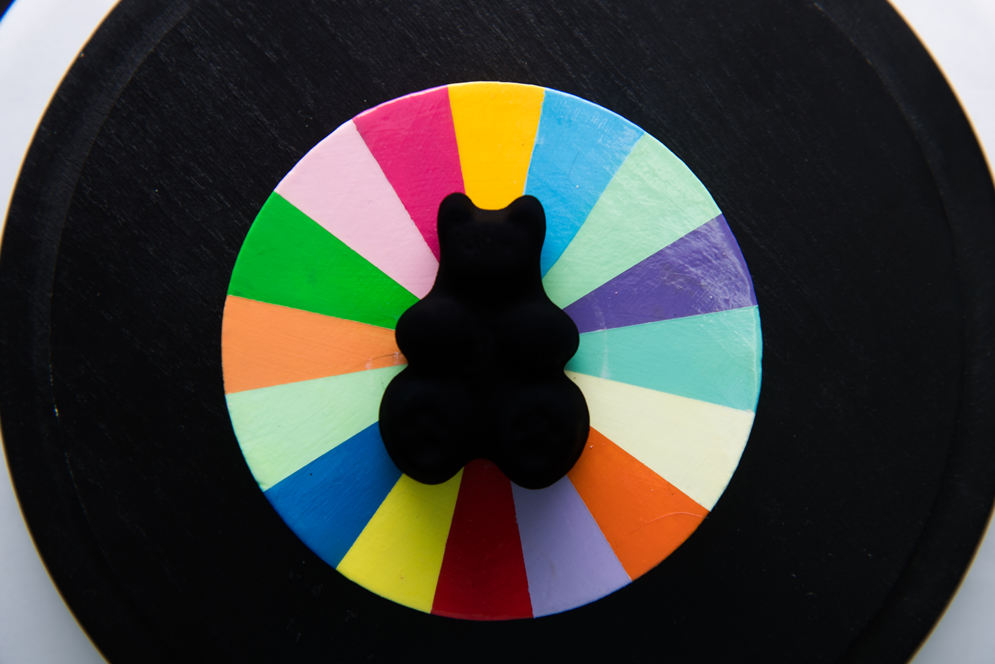 Black Iron Ursa by Jason Chase: a small iron bear was coated with Singularity Black. It’s easy to see its legs and other features when they’re seen against the color wheel. But straight on, it appears as a two-dimensional silhouette. Photo by Cydney Scott

“I had a bunch of bad ideas, and it took me two weeks to come up with something I could do,” Chase says. For his first project, Black Iron Ursa, he coated a cast-iron Gummy Bear candy (which he’d made a few years earlier) with Singularity Black, placing it on a rainbow-striped carousel for contrast. Everything within the bear’s outline disappears before the eye, so from most angles it just appears to be a black blob.

The paint has opened up his art to new types of conceptual thinking. “Light and color is a huge percentage of what a painter’s concern is,” Chase told online art magazine Hyperallergic. “So, absolutely, having the blackest black paint to incorporate is really interesting. But in order to use it in really smart ways, it’s going to take experimentation, and that’s exciting….You could make a drawing in Singularity Black, but if it’s a piece [that requires] single brushstrokes—like a calligraphy piece—after you bake it, it’s not going to be functioning at the level it can. But I think there can be incredibly avant-garde works made with the implications of looking at something so black that your brain can’t really figure it out.”

Collaborating with NanoLab has also led him to a new role in making art. “It’s a collaboration on all levels, and that’s part of my career now,” he says. “To not only create art, but help other artists create. I want to be like the artists who inspired me, who left doors open for others to create works that are truly innovative and different than anyone has seen before.”

“A new black that is very light-absorbent and offers better contrast, regularity of surface, and many uses—probably ones we cannot imagine yet—is a nice gift to artists, architects, industrial designers, and scientists,” says one of Chase’s teachers, Richard Raiselis, a College of Fine Arts associate professor of art, who leads a course on the science of color. “Artistic doors open when artists dream about new situations with new tools. Artists are the beneficiaries of other industries. If not for the auto manufacturers, many of the colors, especially the beautiful organic pigments, might not have surfaced for art.”

In 2016, a British company that debuted a similar paint incited controversy by initially licensing its use to a single artist, Anish Kapoor. With Chase’s help, NanoLab is going the opposite direction, making the pigment available to all artists. The company has even started regular workshops for interested artists, sort of a Singularity Black boot camp, and offers a coating service for artists who want to use the paint without the fuss.

In opening up the pigment to wider use, the scientists’ first goal is to make Singularity Black easier to use—and more affordable. Currently, 20 milliliters costs $50, so even enough pigment for a modest project would be out of the reach of a lot of artists.

“We get calls from artists who want to do, like, a 10-foot sculpture,” Chase says, “and we want to see that too, but hang on! Your first version should probably be a lot smaller.”

For those impatient to get started on their own light-absorbing art, Chase and the NanoLab scientists have also created a version that’s easier to use. Gravity Black is a regular oil paint using nanotubes, and working with it is more wallet-friendly: $150 per 30 milliliters of oil paint, which spreads normally and can cover much more area than a similar amount of Singularity Black. Soon, anyone will be able to try it out.

“Artists have always been the first to get ahold of new material and technologies and push them to limits that the engineers and scientists didn’t even know were possible,” Chase told Hyperallergic. “To be a part of that is so exciting.”

Art and Innovation: In the Spirit of HUBweek is at the Museum of Fine Arts, 465 Huntington Ave., Boston, tonight, October 19, from 5 to 10 pm, in the Druker Family Pavilion, Room 159; admission is free beginning at 4 pm.

The New Black: the Least Reflective Paint Ever

There is 1 comment on The New Black: the Least Reflective Paint Ever

The New Black: the Least Reflective Paint Ever
1
share this