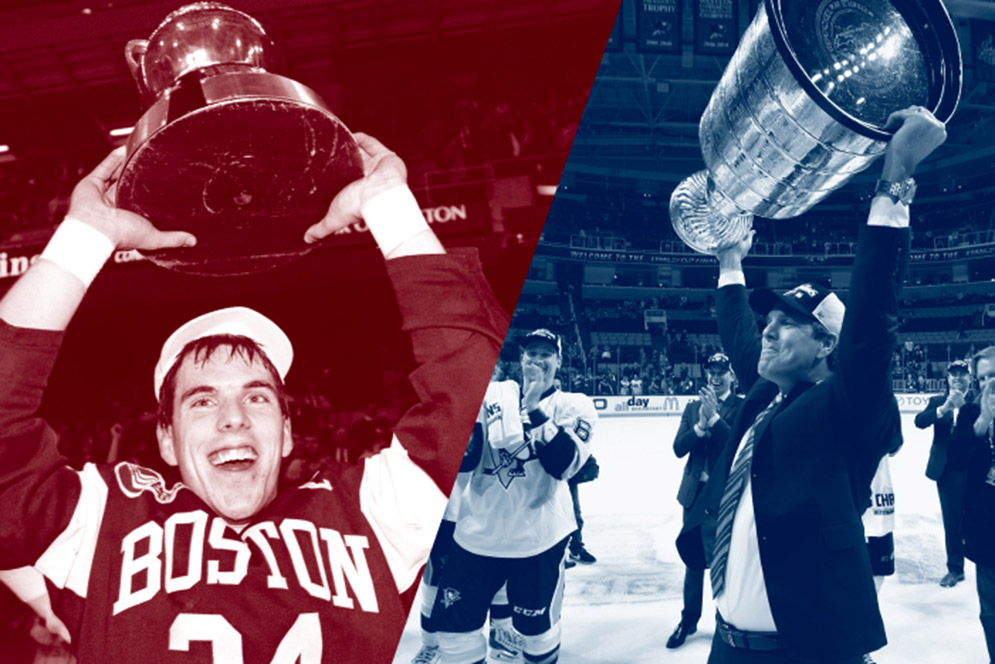 Mike Sullivan celebrates after the Terriers won the Beanpot tournament in 1990 (left). Photo by Kalman Zabarsky. Sullivan hoists the Stanley Cup after the Pittsburgh Penguins defeated the San Jose Sharks to win the 2016 NHL championship (right). Photo by Dave Sandford/NHLI via Getty Images

In spring 2002, as his 11th season in the National Hockey League was winding down, Mike Sullivan found himself in a place no professional hockey player wants to be—the stands.

Then a member of the Phoenix Coyotes, the former Boston University star wasn’t injured. It was worse than that. Game after game, he was what’s called a healthy scratch, able to play but told not to suit up. It was a humiliating sentence for a veteran player, one that means the coach thinks the team is better off with you in street clothes than in pads and skates.

Instead of feeling sorry for himself, Sullivan (Questrom’90) did what has been the hallmark of his long hockey career: he found an upside, a way to help his team in whatever way he could. He studied the Coyotes’ play closely from the press box, then shared his observations with his coaches. Soon he was adjusting the team’s penalty killing and sitting in on coaches’ meetings where lineups and game strategy were devised.

That approach to hockey—turning a negative into a positive—is what brought Sullivan where he is today: head coach of the reigning Stanley Cup champion Pittsburgh Penguins, who have won the title two years in a row, in 2016 and 2017.

“Things are not always going to go your way, so you have to decide how you’re going to react,” Sullivan muses on a sunny afternoon after a noontime skate at the Penguins gleaming practice facility in Cranberry, Pa. “There are so many things in hockey that you can’t control. So it’s more important that you identify those things that will give you your best chance to have success, and focus on them.”

It’s a philosophy that has worked for his life beyond playing, too. “It’s an important element of having a good team,” he says, “and of having a good career—how you deal with the ebbs and flows.”

How to Win the Stanley Cup