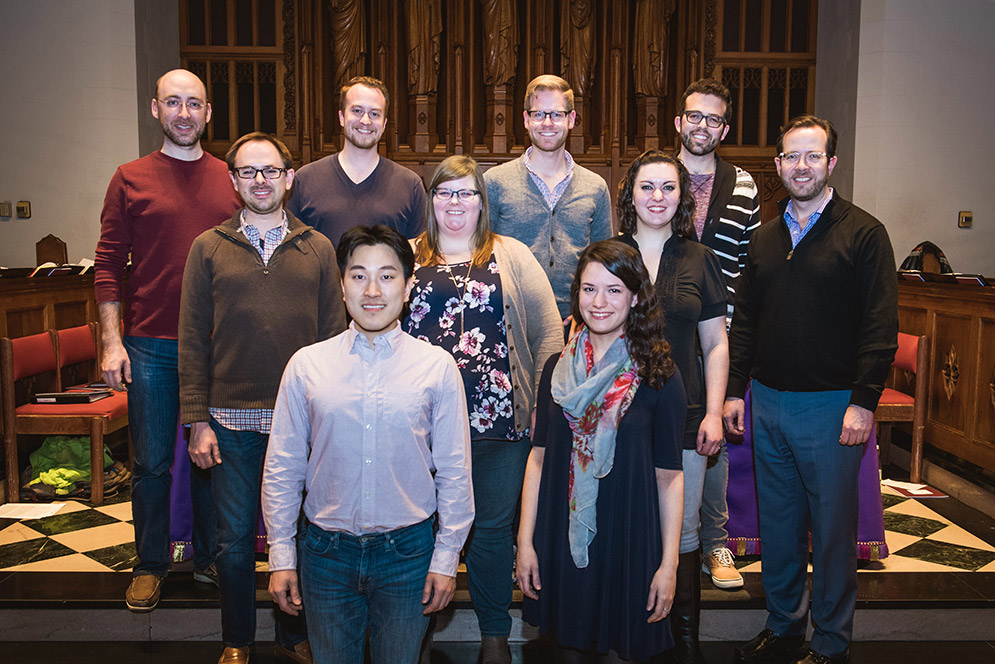 Boston University’s Marsh Chapel is renowned for its music program. Through weekly public radio broadcasts of its Sunday service and its concerts, the chapel has earned a national reputation for musical excellence. But among the chapel’s various music groups—the Marsh Chapel Choir, the Thurman Choir, the Inner Strength Gospel Choir, and the Marsh Chapel Collegium—one particular program not only offers a select group of nine hand-picked rising vocalists a chance to hone and expand their classical repertoire, but also serves as a launching pad for prominent careers on the international stage. That program is the Choral Scholars of Music at Marsh Chapel.

Choral Scholar positions are one-year paid appointments, with the option for renewal at the end of each academic year. While several scholars have stayed for as long as a decade, most move on after three or four years. Connection to BU is helpful, but not mandatory—about half of the current scholars have an affiliation with the University. The one constant in the residency program is the configuration: it always comprises three sopranos, two tenors, two altos, and two basses. And although the scholars are young, they are leaders, says Scott Allen Jarrett (CFA’99,’08), Marsh Chapel music director.

“The quality of these scholars has helped us to perform high-quality music, and they go off to spread the news about Marsh Chapel, which is a training ground,” says Jarrett. “Our people are in demand and are singing at concerts all over the place.” A case in point is Choral Scholar Jacquelyn Stucker, who is about to begin a residency with the Royal Opera House at London’s Covent Garden. A Boston Globe critic has referred to her singing as “incandescent.”

The scholars are the soloists for Marsh Chapel’s concert season and the Bach Cantata series and provide ensemble leadership for the Marsh Chapel Choir and the Thurman Choir. To be considered, applicants must have superior solo and ensemble skills, an interest, and experience, in concert music (particularly the vocal works of J. S. Bach and G. F. Handel), exceptional sight-reading ability and musicianship, and be able to communicate musical text, narrative, and meaning. Auditions are held as positions become available.

The position is demanding: in addition to singing at Sunday services throughout the academic year, the scholars rehearse each Thursday evening and rehearse for, and perform at, Marsh Chapel’s concerts, the Bach Cantata Sundays, and Holy Week services.

“The nature of the Choral Scholar’s role involves learning a huge quantity of repertoire over each semester, with what is essentially a performance at least once a week for a vast congregation, in person, on the radio, and online,” says soprano MaryRuth Lown (CFA’17), who is set to graduate from BU with a master’s in historical performance later this week. “It’s not an easy or low-pressure job, but it is beautiful and worthwhile. As a result of the rigorous schedule, my skills in learning music quickly and thoroughly have greatly improved, as have my ensemble skills.

“I’m given a chance to perform a beautiful, challenging repertoire with excellent musicians every single week, which is incredibly fulfilling,” Lown continues. “My solo assignments placed me in front of a professional orchestra for the first time in my life, and made me realize that I dearly love performing oratorio and concert works.”

“The Marsh Chapel Choral Scholars program, under the direction of Scott Allen Jarrett, has been one of the primary incubators of professional ensemble and early music singers in the United States,” says conductor Patrick Quigley, a two-time Grammy Award nominee and founder and artistic director of Seraphic Fire and the Firebird Chamber Orchestra. Quigley, who is celebrated for his exacting, historically informed interpretations of classical and baroque repertoire, routinely features Marsh Chapel Choral Scholars in his performances.

“The alumni of the program currently populate literally every high-profile vocal ensemble in the country. The musicianship, repertoire, and professional bearing that the Chapel Choral Scholars learn under Maestro Jarrett are the skills that allow these artists to confidently step into the demands of being a working professional musician,” he says. “Seraphic Fire, Lorelei, Handel and Haydn Society, Conspirare—the list is endless of where one can hear alumni of this vital professional training program.”

Quigley attributes the program’s success to the leadership of Jarrett and Justin Blackwell (CFA’09), the chapel’s organist and associate director of music, both of whom are mainstays on the professional vocal circuit, he says.

The scholars’ résumés are impressive, varied, and constantly broadening. Here is just a sampling of their accomplishments: bass Joseph Hubbard (CFA’17), who will graduate from CFA’s Opera Institute at Commencement on Sunday, sang the role of Figaro in the College of Fine Arts production of Le nozze di Figaro at the BU Theatre in April. Tenor Patrick T. Waters (STH’08), who has degrees in composition, conducting, and sacred music and studied with Ann Howard Jones, a CFA professor emerita, has performed Bach, Handel, Haydn, and Beethoven with many Boston groups. Soprano Carey Shunskis (CFA’12) has a master’s in choral conducting, has performed internationally, is resident conductor for Harvard Pro Musica, and founded Consono Lumine, a vocal chamber group for high school students. Mezzo soprano Kim Leeds is a graduate of the Boston Conservatory and recently received the Virginia Best Adams Fellowship from the Carmel Bach Festival. Hailed as a “vivid countertenor” by the Wall Street Journal, Douglas Dodson has sung countertenor in Marsh Chapel oratorios and was recently named a Vocal Fellow at the Oregon Bach Festival. A concert soloist with a background in opera as well as oratorio, tenor Ethan DePuy has performed in operas such as The Turn of the Screw, Die Fledermaus, and Dialogues of the Carmelites. Baritone Junhan Choi, a New England Conservatory graduate with a long list of opera credits, is also a lieder recitalist; he recently won three Special Prizes at the Francisco Viñas International Singing Contest in Barcelona.

For Jarrett, who is spread thin among many conducting and teaching responsibilities, the Marsh Chapel Choir and the Choral Scholars program are continually rewarding. “I love helping people find themselves musically,” he says.