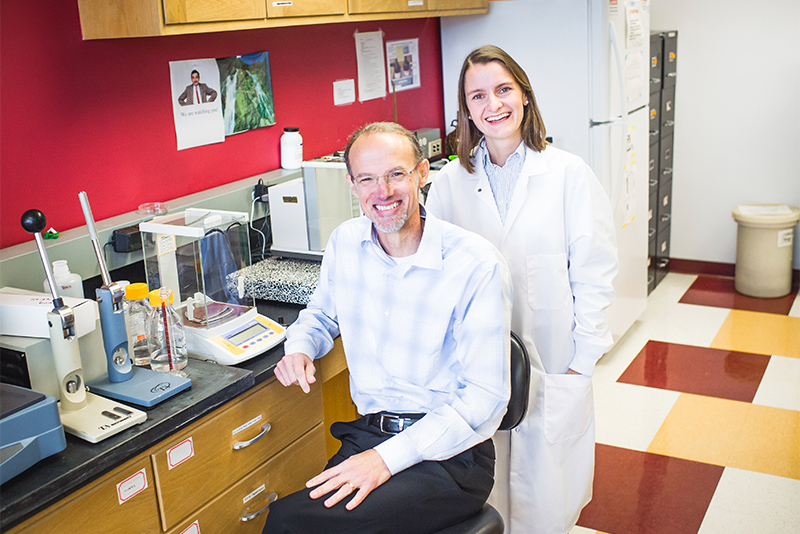 Mark Grinstaff and Marlena Konieczynska have developed a new hydrogen gel that could eliminate the need to anesthetize children for burn dressing changes. Photo by Jackie Ricciardi

For patients with second-degree burns, it’s not always the initial injury that hurts most. The daily, sometimes hours-long bandage changes can be the most excruciating ordeal.

Now, a new development from BU’s Grinstaff Group could soon make those painful bandage changes obsolete. Enter the hydrogel burn dressing, a gel-like solution that acts as a barrier to infection for burns, keeps the wound moist, and—most important—can be washed off painlessly with a separate solution.

The burn dressing is the latest project to emerge from the multidisciplinary lab run by Mark Grinstaff, a Boston University College of Engineering (ENG) Distinguished Professor of Translational Research, who says his lab members are challenged to solve problems that have the greatest needs and where current technology doesn’t perform well.

The new dressing doesn’t just spare burn victims pain—it saves medical staff hours of time spent rebandaging, and since many children cannot sit still during the painful dressing change, it can eliminate the need to anesthetize young patients during rebandaging. For second-degree burn patients, the removal of dressings is extremely painful, because nerves are still exposed. With more severe third-degree burns, the nerves are burned away.

“Even if you could save half the trips to the OR to change dressings, it would be a significant improvement,” says Edward K. Rodriguez, chief of the Division of Orthopaedic Trauma at Beth Israel Deaconess Medical Center, who worked on the project. “Imagine if you could just cover the wound directly with an aerosol-applied gel with antiseptic and pain control medication on it, and remove it at the bedside without having to take the patient to the OR.”

The Grinstaff Group includes PhD students and postdoctoral researchers studying chemistry, pharmacology, and biomedical and mechanical engineering, all tasked with coming up with solutions to real-world problems. Grinstaff, also a BU College of Arts & Sciences chemistry professor, an ENG materials science and engineering professor, and a BU School of Medicine professor of medicine, is the director of the BU Nanotechnology Innovation Center. The Grinstaff Group members count on one another’s specialties to pose the best questions and challenge solutions.

The burn dressing problem came to the fore when researchers at the Beth Israel Deaconess Medical Center lab of Ara Nazarian, a Harvard Medical School assistant professor in orthopaedic surgery, failed to get funding for a different project—a gel to stop bleeding on the battlefield. The researchers looked around for another problem that might be tackled with the same concepts.

For the new burn dressing, Rodriguez says, the Grinstaff Group brought expertise in chemistry, and the Nazarian Lab offered its small animal lab for physiological testing. “We’re fortunate to live in a city where there is so much creative and intellectual talent,” he says. “Many times, the most creative advances happen when people with completely different backgrounds come together.”

For researchers like Konieczynska, who defended her PhD thesis in spring 2016, working with biologists, medical doctors, and other specialists is a major advantage. “From a student perspective, it’s extremely educational,” she says. “It helps you understand your project from many different perspectives. I think our lab is quite special.”

Now that the researchers understand the material and have proven it works on small animals, the next step is a large animal model, where they compare the technology to current products, Grinstaff says. If that larger animal study works as well as the small animal one, next is getting it into a clinical setting and figuring out how to manufacture it.

Within two years, patients could feel a spray, instead of a painful cut, when it comes time to change their bandages.

A Better Way to Treat Burns from BU’s Grinstaff Lab